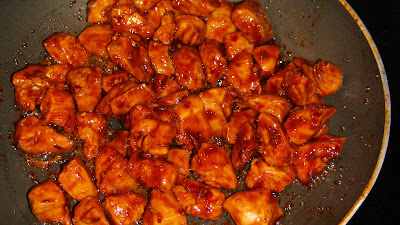 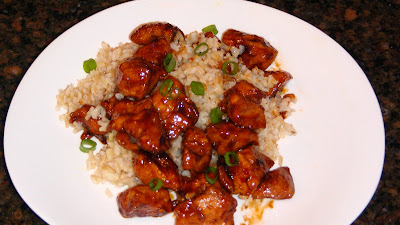 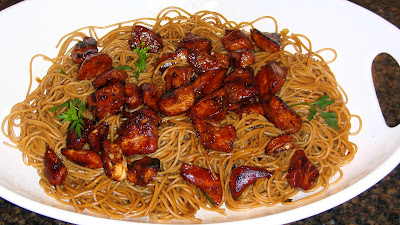 It's no secret that I am a HUGE fan of the Recipezaar website. In fact, my new hobby is searching their website by ratings to find the best recipes on there. The Bourbon Chicken has received 1723 reviews (one of the most reviewed recipes on Recipezaar). This is rated as a five-star recipe. How can you go wrong? This recipe for Bourbon Chicken was so easy! I just cubed up my chicken and cooked until lightly browned being careful not to cook it through. Then you add all the other ingredients to the pan and throw the chicken back in. Bring everything to a boil and simmer for 20 minutes or until the sauce becomes thick and glazed. I served the Bourbon Chicken over brown rice with scallions. This recipe was so tasty and was seriously one of the best things I've ate in awhile. I also gave this recipe a five-star rating and will be making it once every week or until I get my fill of it!! It is pictured in the top two pictures.

The next day I made Funky Chicken and Sesame Noodles. The recipe can be found here. I chose this recipe mainly because my daughter loves "chinese noodles" and I was hoping this would be something she would like. She is rather picky about food and I love when I can add something else to her list of foods. My husband is a huge fan of Chinese restaurants and I figured this was a sure thing for him as well. This was rated almost five-star on Recipezaar and was also a popular recipe. This recipe says to marinate the chicken and the noodles, but I'm not sure this is a necessary step. I think there was enough flavor to just combine all ingredients and cook straight away. My husband and daughter LOVED this dish. I was excited that Olivia enjoyed the noodles and am happy to add something new to her diet. I learned that I might not be a huge fan of sesame oil. The noodles were combined with soy sauce, sesame oil, sugar, and scallions. Sesame seeds were to be sprinkled on top, but I did not have any so we skipped that ingredient. I did however really enjoy the chicken which was marinated in a combinations of soy sauce, terriyaki sauce, ginger, and brown sugar. The chicken was sauteed in sesame oil, but could easily be cooked in olive oil, canola or any other substitute. All in all this recipe is really good for the family. See the huge portion it made in my third picture!! I will make it again but I will add less sesame oil to the noodles and cook my chicken in canola oil.
Try them both and see which one you like best!!
Posted by Kim at 8:17 AM