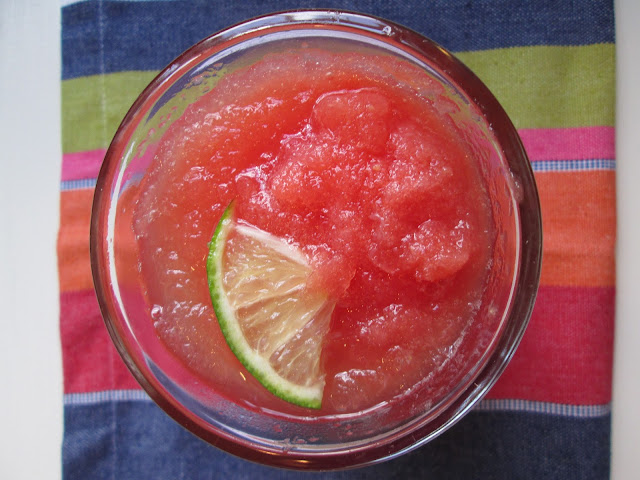 I didn't want the 12 pound watermelon rolling around in the back so I held onto it as I drove. Watermelon in my left hand. Steering wheel in my right. Sometimes, when the mood strikes me, I do these things just to amuse myself. A driver just going about their day passes me on the road and chuckles, or they honk and give a thumbs up, or they scream WATERMELON at the top of their lungs as they whiz by. Either way, it always results in a good laugh. I'm always up for squeezing a few more laughs into my day.

When I arrived home safely, watermelon in hand, I decided to give this particular watermelon a special treatment.  I had watermelon margaritas on my mind, but the kids were begging for watermelon, so whatever I chose needed to be kid-friendly.  Thankfully, I found this recipe for Frozen Watermelon Slush in Jacques Pepin's book and it was perfect! A tasty and refreshing slush for the kiddos and the ideal base for an adult drink. Simply add some watermelon slush to a glass and top it with a little splash of tequila or vodka, a quick squeeze of lime, and you have the perfect summery drink! It's delightful! 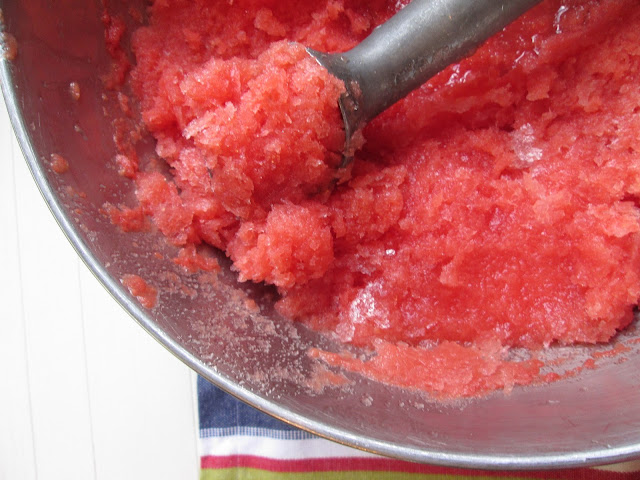 Halve the watermelon lengthwise, halve again, and cut into 2-inch pieces. Remove and discard the rind, black seeds, and as many of the softer white seeds as possible. Cut the flesh into 1-inch chunks. Place in a food processor, in batches if necessary, and process until liquefied; some small chunks may remain. You should have about 10 cups. Add the lime or lemon juice and sugar and process until incorporated. Blend in batches if necessary.
Transfer the watermelon mixture to a stainless steel bowl, cover, and freeze until solid, 8 to 10 hours.

About 2 to 3 hours before serving, move the bowl to the refrigerator to soften the mixture. In the hour before serving, use a fork to break the softened mixture into shavings. Serve in chilled glass goblets or bowls. Garnish with lime and/or watermelon wedges. 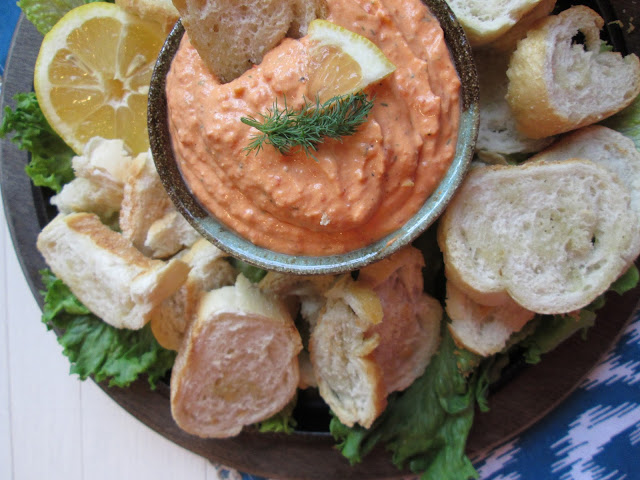 It's time for another mystery box madness with I Heart Cooking Clubs. Participants are asked to chose 3 out of 10 ingredients and make a dish from one of our 12 IHCC chefs. The ingredients were really tough this time around: Any White-Fleshed Fish, Green Leaf Lettuce, Pine Nuts,Dill, Cheddar Cheese, Almond Extract or Liqueur, Blueberries, Cornstarch, Bell Pepper, and Black Beans. It's not that the ingredients didn't favor one another, because they definitely do. The trouble was I simply couldn't find a recipe among our 12 IHCC chefs that contained 3 of those ingredients.

So, what did I do? Well, I cheated.  I chose Pepin's Croutons with Creamy Red Pepper Dip because it contains red bell pepper and dill.  Then I got crafty and served it on a bed of green leaf lettuce. Yes, I did!

We all loved the pretty color of this dip and thought it was really tasty with the crunchy croutons.  While this dip contains both cream cheese and cottage cheese it is not necessarily cheesy. The cheese creates a wonderful creamy consistency, but the main flavor is the red pepper and the dill (which is actually a delicious combination). I think this is a perfect summer dip for croutons, crackers,or even some fresh veggies. I can definitely see myself making it again for a party. 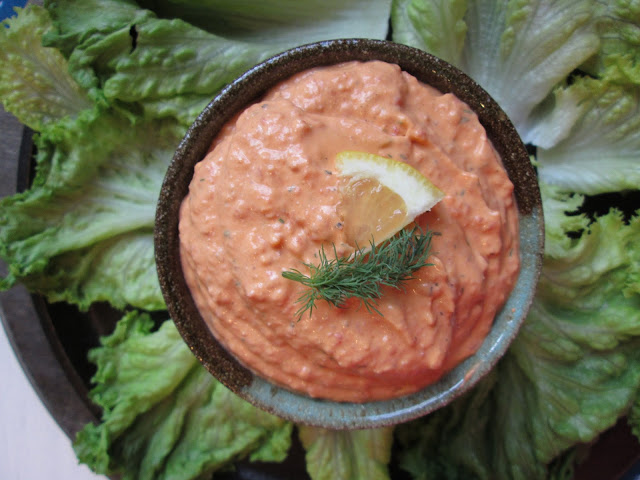 Place one garlic clove in the bowl of a food processor. Add the red peppers, cream cheese, cottage cheese, dill, lemon juice and black pepper.  Process the mixture until it is smooth.  Set aside.

To make the croutons, cut the bread into 42 to 48 slices. Arrange the slices on a cookie sheet and bake them for 10 minutes, or until crisp. Remove from the oven and rub each slice with the other clove of garlic and drizzle croutons lightly with olive oil. Spread the croutons with the pepper spread and garnish each with a small sprig of fresh dill.
Posted by Kim at 8:27 PM 7 comments: 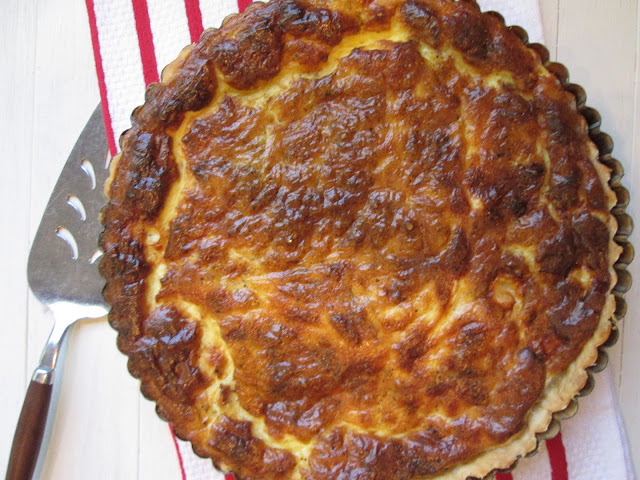 Gruyère cheese is something I rarely used prior to cooking with Jacques Pépin. However, Jacques' recipes favor Gruyère and I am ever so thankful for the push to experiment with this marvelous cheese. Gruyère is now my favorite cheese. Hands down!

Gruyère is sweet but slightly salty, with a somewhat nutty flavor, and it melts beautifully. I like it for snacking, grilled cheese, sauces such as bechamel, and as a topping for any gratin. I've been buying the real deal cave-aged Gruyère from Switzerland and it is pricey but it's flavor and melt-ability simply cannot be beat.

This bacon quiche is really more of a  Gruyère quiche. The five slices of crumbled bacon lend a hint of bacon flavor, but what you really taste in this quiche is the one and a half cups of diced Gruyère.  The Gruyère (and the bacon) settle to the bottom and create a bacony cheesy layer that is quite addicting! I was hoping for leftovers but we loved this so much we ate it in one setting! 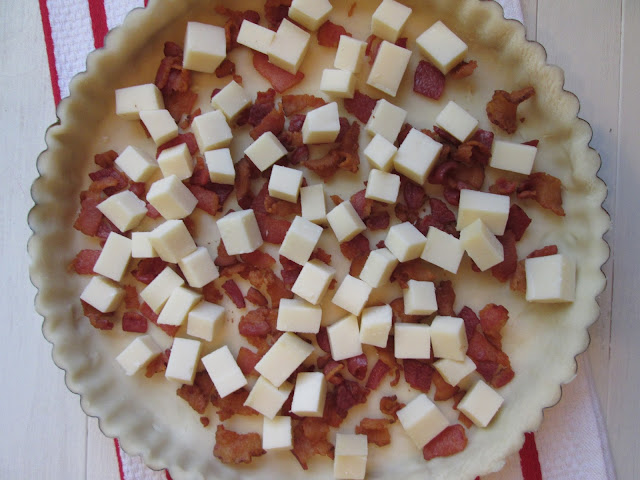 Preheat the oven to 400 degrees.

For the Dough: Combine the flour, salt, butter, and lard or shortening together in a food processor and process until you have a coarse mixture, about 10 seconds. Add the water and process for 5 seconds. Turn the dough out and gather together in a ball. Roll the dough out with a rolling pin into an 11-or 12-in circle and use it to aline a 9- to 10-inch tart pan with removable bottom or a pie pan. Refrigerate until you are ready to fill the quiche shell.

For the Filling: Beat the eggs in a bowl only until well mixed. Stir in the milk, cream, and salt and pepper. Scatter the bacon and cheese over the dough. Place the pan on a cookie sheet and pour in the egg mixture. Bake for 1 hour,or until the filling is set and browned on top.  Remove from the oven rested for at least 15 to 20 minutes. Cut into slices and serve. 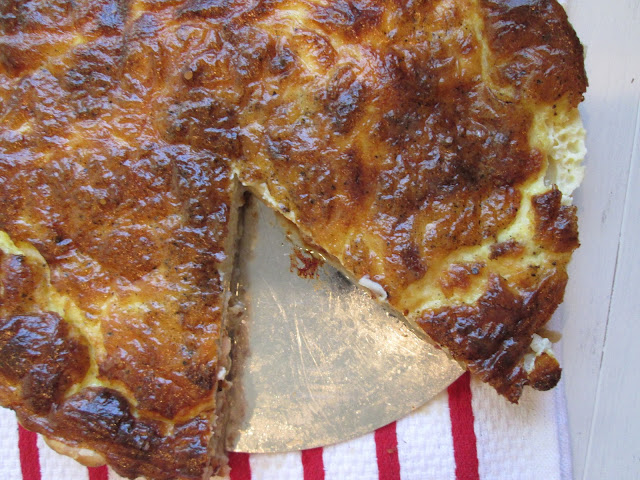