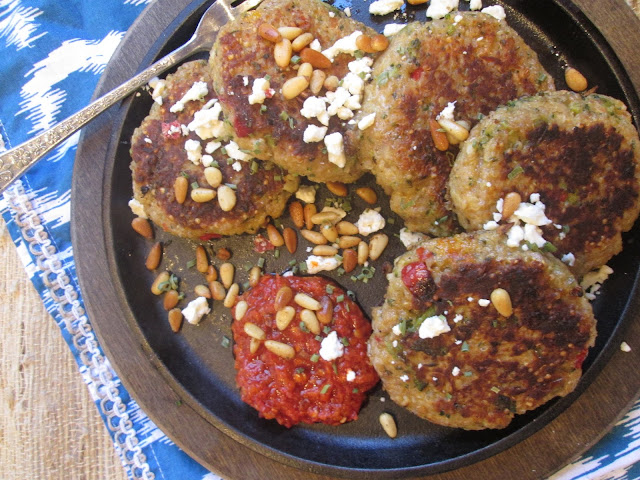 These Quinoa Patties have been a looooong time coming. I bookmarked them way back and they've been on my list for what feels like forever.

I think one of the reasons they appeal to me so much is because it's one of those basic recipes, like pizza or risotto, which can be taken in many directions, depending on your inspiration.

For example, this time around I was inspired by a jar of Harissa I bought at Trader Joe's. I knew I wanted to use the Harissa as a dipping sauce, so I started there and decided to add in bell peppers, broccoli, feta cheese, and pine nuts.  This version was spicy and full of flavor!

In the future I'm inspired to try many other versions. More than anything, I think a breakfast version with a fried egg and sliced avocado on top would trump just about any other version.  Although, of course, I think an Italian version with pesto, loads of garlic, and Italian cheeses would also be delicious. After that, I can seeing mixing in some lentils or beans, maybe trying my hand at a kale version, and perhaps even a Thanksgiving-inspired version with dried cranberries and nuts/seeds. See, lots of possibilities!! Numerous forms of inspiration.

Also worth noting, I cooked my quinoa according to this recipe, which I prefer because the quinoa is toasted before cooking, which results in a nuttier and more robust flavor.  I cooked the quinoa in chicken broth, but you could use veggie broth if you wanted to go vegetarian, and seasoned the quinoa with salt, pepper, chives, and parsley.

These Quinoa Patties are inspiring. Open up your mind and create your own version using some of your favorite flavors! 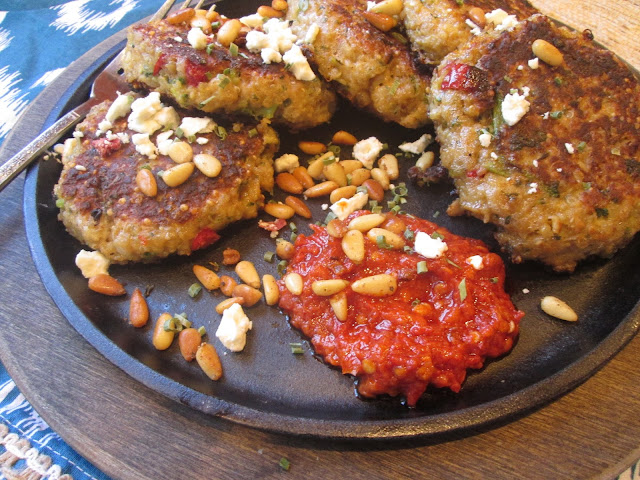 Notes: My changes/additions are noted with an asterisk*


Combine the quinoa, eggs, and salt in a medium bowl. Stir in the chives, onion, cheese, garlic, broccoli, and peppers. Add the bread crumbs, stir, and let sit for a few minutes so the crumbs can absorb some of the moisture. At this point, you should have a mixture you can easily form into twelve 1-inch thick patties. I err on the very moist side because it makes for a not-overly-dry patty, but you an add more bread crumbs, a bit at a time, to firm up the mixture, if need be. Conversely, a bit more beaten egg or water can be used to moisten the mixture.

Heat the oil in a large, heavy skillet over medium-low heat, add 6 patties, if they'll fit with some room between each, cover, and cook for 7 to 10 minutes, until the bottoms are deeply browned. Turn up the heat if there is no browning after 10 minutes and continue to cook until the patties are browned. Carefully flip the patties with a spatula and cook the second sides for 7 minutes, or until golden. Remove from the skillet and cool on a wire rack while you cook the remaining patties.  Alternatively, the quinoa mixture keeps nicely in the refrigerator for a few days; you can cook patties to order, if you prefer. 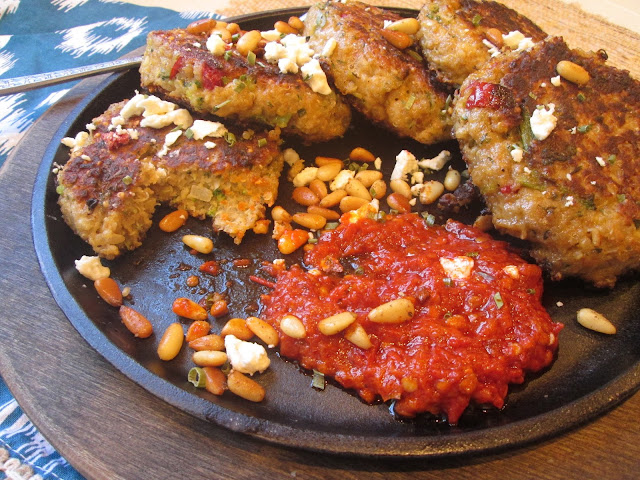 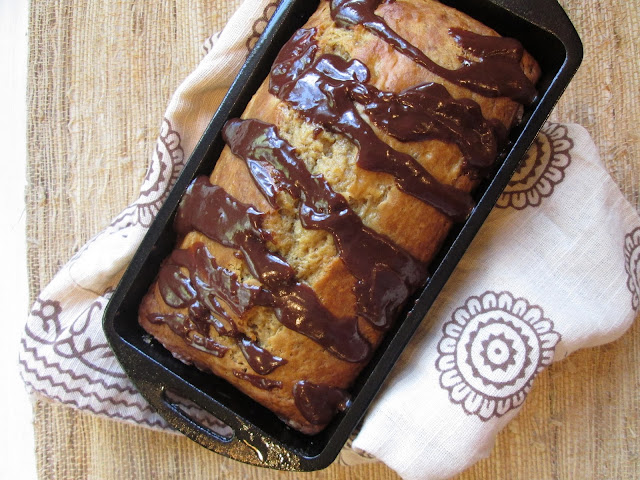 This is the 5th recipe for banana bread I've shared on my blog. Over the years I've made banana bread with many additions: pecans, bourbon, peanut butter, and my all-time favorite - loads of brown sugar. Now I'm back at it again giving banana bread a healthy-ish twist by reducing the sugar, using part whole wheat flour, and replacing some of the oil with yogurt. And you know what? You would never know this is a healthier version!

This is a deliciously moist banana bread with a very nice crumb.  The best part, of course, is the chocolate drizzle. Of course, when I was putting the recipe together I was thinking 1/2 oz of chocolate? How is that going to be enough to drizzle atop the whole loaf? Well, I should have known better than to question one of Ellie Krieger's recipes because of course it turned out to be the perfect amount. Like always, Ellie has succeeded in turning another classic into a healthier and crave-worthy delight!

If you're a fan of banana bread I would definitely give this recipe a try! The chocolate drizzle really gives this recipe a dessert feel. I found this to be very satisfying and indulgent. 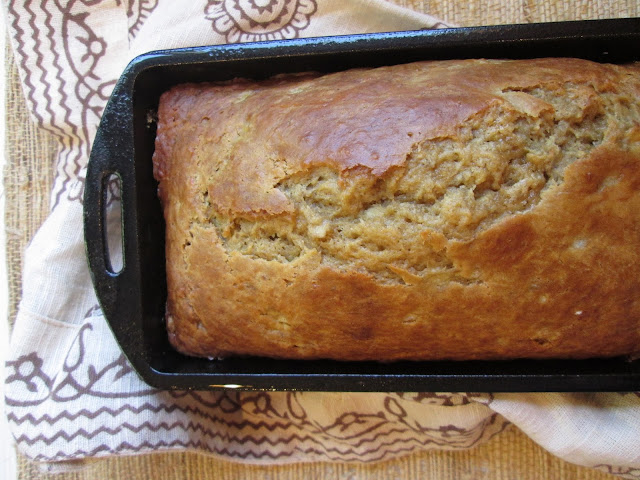 Notes: I opted not to use the walnuts

If you'll be adding the walnuts, spread them on a baking sheet and toast in the preheated oven until fragrant and lightly browned, about 8 minutes.

Whisk together the oil, yogurt, eggs, and vanilla extract in a medium bowl, then whisk in the mashed bananas until well incorporated. Add to the flour mixture, stirring just until combined. Stir in the toasted walnuts, if using.

Pour the batter into the prepared pan, smoothing the surface. Bake at 350 degrees until a wooden skewer inserted into the center comes out clean, 50 to 55 minutes. Cool in the pan, then transfer the loaf to a plate.

While the banana bread is cooling, combine the confectioner's sugar and the 2 teaspoons of milk in a small saucepan over low heat; stir until the sugar has dissolved.  Add the chocolate and cook, stirring, until melted and well incorporated, about 1 minutes. If the mixture seems too thick, add another teaspoon or two of milk. Remove from the heat.

Drizzle or spoon the chocolate mixture over the top of the banana bread. Allow the chocolate to cool and set before slicing and serving. 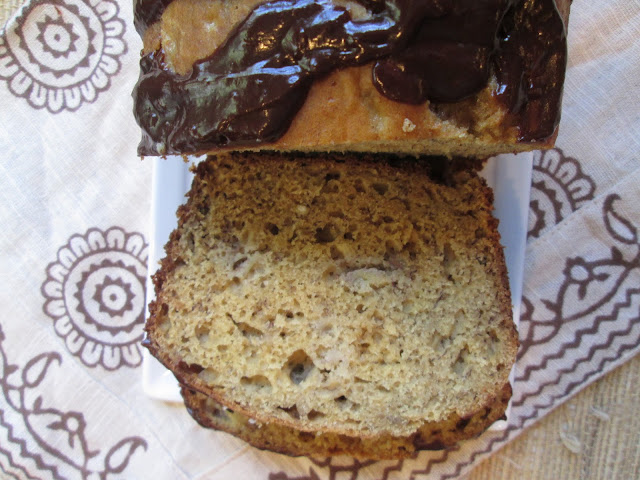 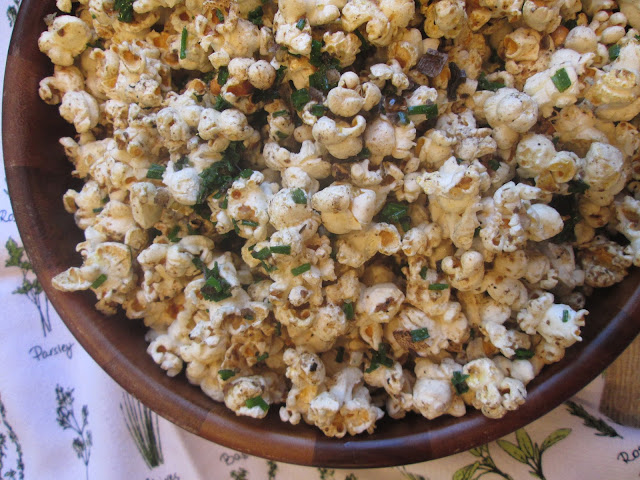 When Heidi Swanson won the vote as our next IHCC chef I had visions of quinoa patties running through my head. Without a doubt, the very first recipe I was going to share would be her Quinoa Patties, with a southwest twist. I had visions of those golden brown patties artfully arranged on a plate with some salsa and slices of ripe avocado. I bought all the ingredients.

Hours later, I was sitting on the back porch with the dog, enjoying the cool breeze, and realized it was the most glorious fall day. No way was I going to spend that gorgeous day inside making quinoa patties. Quick glance through Heidi's Super Natural Every Day and I nearly squealed with delight when I found this perfectly easy, and quick, recipe for Popcorn with Mustard, Thyme, Chives & Browned Butter.

Score! Mustard is one of my favorite ingredients so my interest was piqued. Bonus, I was also able to clean out my pantry a bit by using the last of my popcorn kernels and the last of my fresh herbs. I love it when a plan comes together like that!

So, here it is. A delicious popcorn recipe to share with your loved ones. Perfect to eat on the sofa while you're binge watching episodes of your favorite show. Browned butter is always a welcome addition with it's warm nutty flavor. The two tablespoons of Dijon mustard was just the right amount, leaving behind a subtle flavor of Dijon. To me, the star was the addition of the chives. I found myself searching for the bits that were heavy on the chives. Those bites were quite simply my favorite! A definite make again recipe! 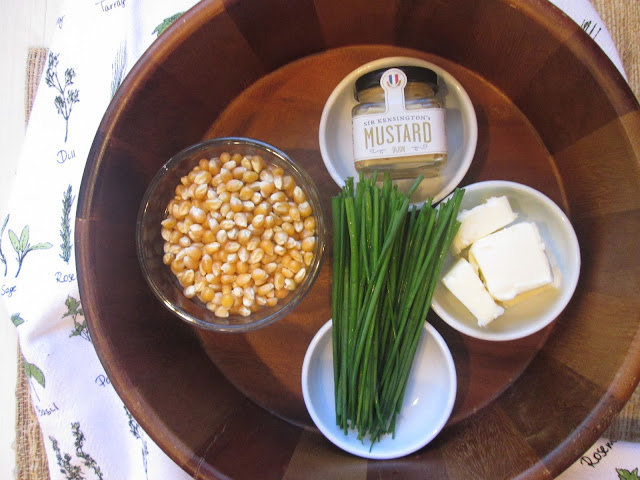 Heat the butter in a deep, heavy saucepan over medium heat. Add a few popcorn kernels to the pan and cover. Once they pop, add the remaining kernels and shake the pot until they cover the bottom of the pan evenly. Place the lid on the pan, leaving just a sliver of a crack, and shake intermittently while the popcorn pops, until there is a 5-second pause between pops. Remove the popcorn from heat and transfer all the popped corn to a large bowl, leaving any unpopped kernels behind.

In the meantime, melt the butter over medium heat and let it sizzle away until it has browned a bit and is fragrant. Whisk in the mustard and salt. 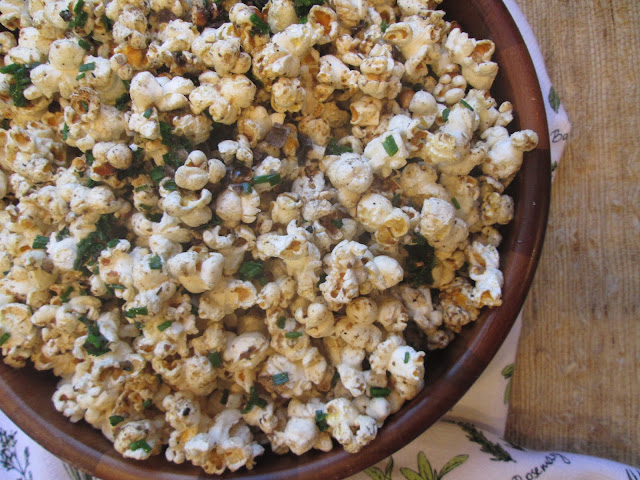 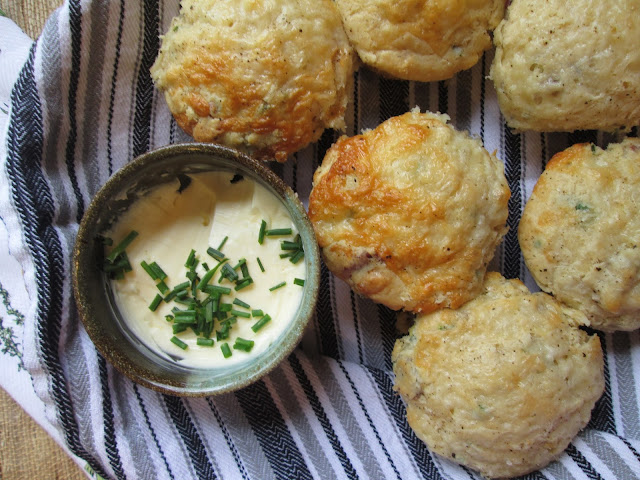 This is  I Heart Cooking Club's seventh year and Curtis Stone is our 14th chef. During this time we've cooked with some pretty amazing chefs such as Jacques Pepin, Rick Bayless, and Yotam Ottolenghi and, I have to say, Curtis is right there at the top of the list! He is hands down one of my favorites. His recipes are very approachable and family-oriented. I never once felt like the ingredient list was too long or the recipe too daunting. I found the recipes very well-written and, on top of that, every single recipe I tried was a smashing success.

I have all of Curtis' cookbooks but found I favored his Relaxed Cooking the most. I love that he has an entire book dedicated to simple and quick food that always delivers.  This recipe for Lozza's Corn and Bacon Muffins is a perfect example. These muffins are very low effort, but they are also crazy addictive! Lovely little fluffy clouds of cheesy goodness with sweet pops of corn and yummy little streaks of bacon. These are absolutely heavenly fresh out of the oven with a smear of butter. I'm gonna go ahead and say that no one could stop at just one! I think these muffins would be perfect to serve for the upcoming holidays. I know they will be making a repeat performance at my table!

Listed below are my top ten favorite Curtis Stone dishes in no particular order. Thanks to Curtis for a wonderful 6 months. I know I will be revisiting his cookbooks in the future! 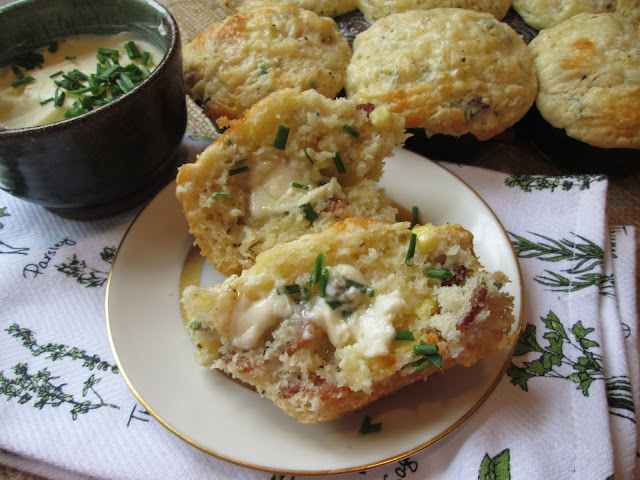 Notes: Somewhere I read that this recipe called for self-rising flour so I used that and had wonderful results. I would say it's safe to use either all-purpose or self-rising.

Preheat the oven to 400F. Cook the bacon in a large heavy saute pan over medium heat for about 8 minutes, or until it is browned and crisp. Using a slotted spoon, transfer the bacon to paper towels. Brush 12 standard-size muffin cups generously with some of the bacon drippings from the pan, and set aside 1/2 cup remaining bacon drippings to cool slightly. Discard any remaining bacon fat.

Use a sharp knife to slice the corn kernels off the cob. You should have about 1 cup.

Whisk the flour, baking powder, salt, and cayenne pepper in a large bowl to blend. Whisk the milk, eggs, and reserved bacon drippings in another large bowl to blend; then stir in the bacon, 1-1/2 cups of the cheese, the corn kernels, and the chives. Stir the milk mixture into the flour mixture just until blended. Spoon the batter into the prepared muffin cups, dividing it equally and mounding it generously. Sprinkle the tops of the muffins with the remaining 1/2 cup cheese. Bake for about 18 minutes, or until the muffins are golden and a tester inserted into the center of one comes out clean. Let the muffins cool slightly in the cups.  Then run a small sharp knife around the muffins to loosen them from the cups, remove them, and serve them warm with salted butter. 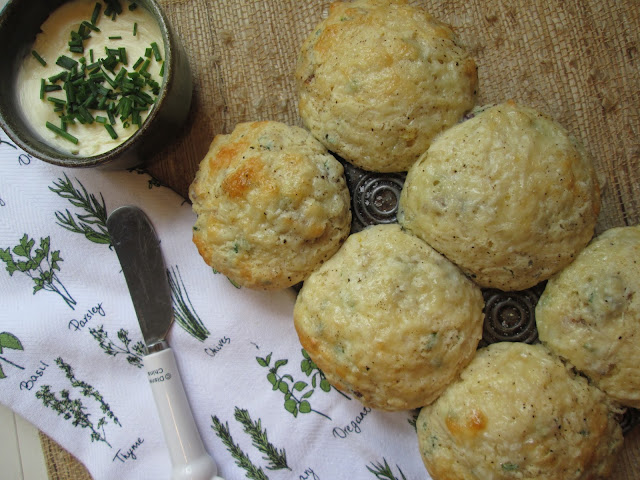 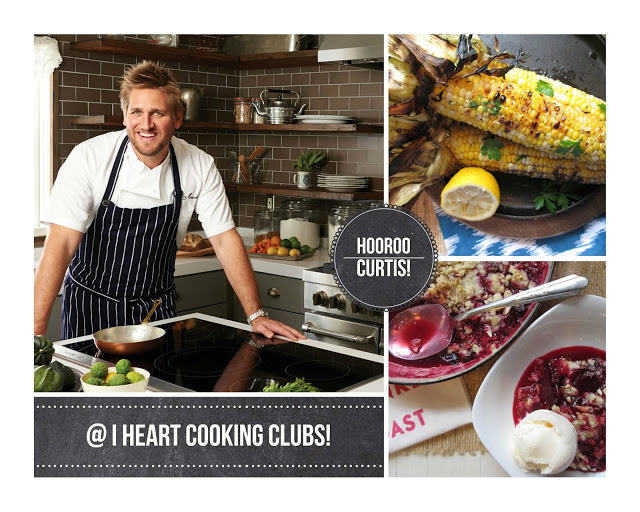 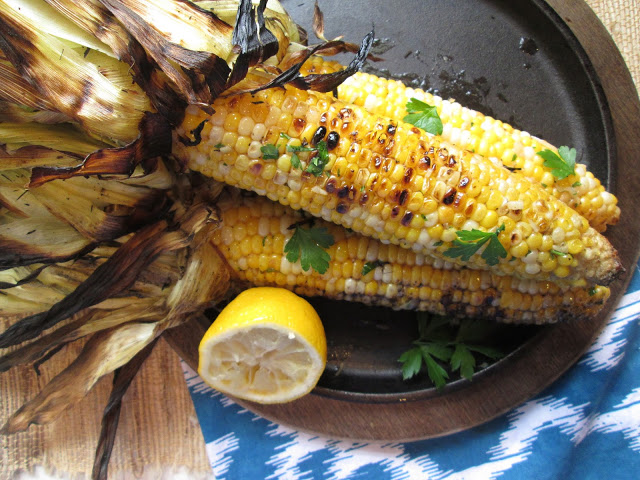 Grilled Corn On The Cob with Parsley and Garlic Brown Butter 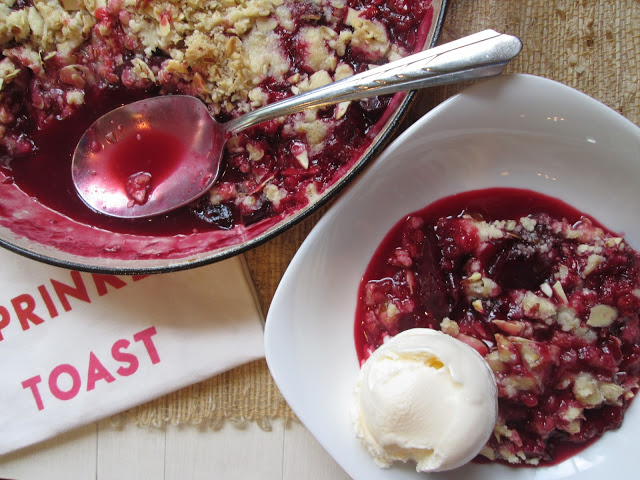 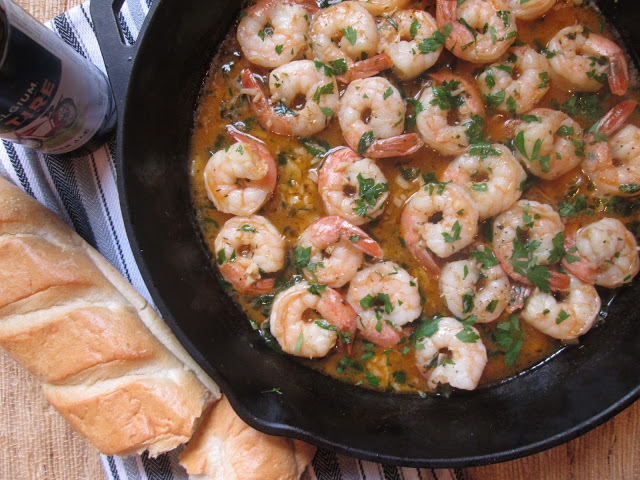 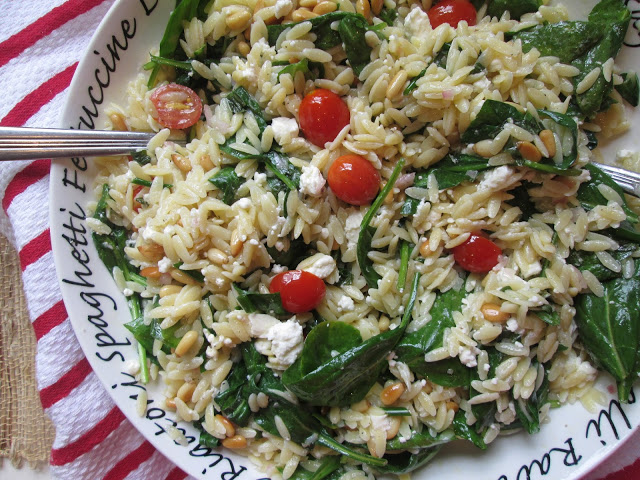 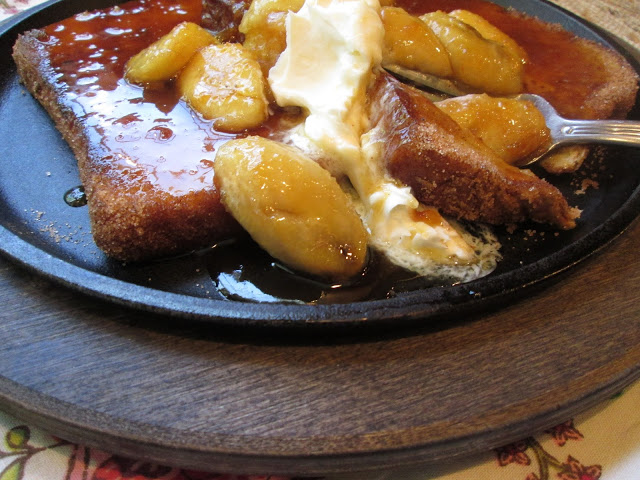 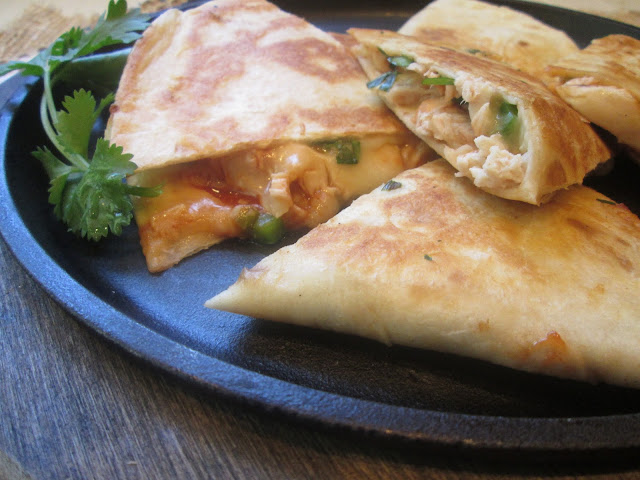 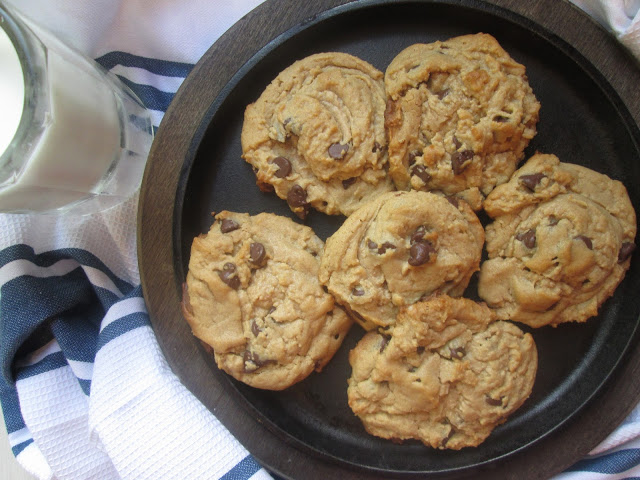 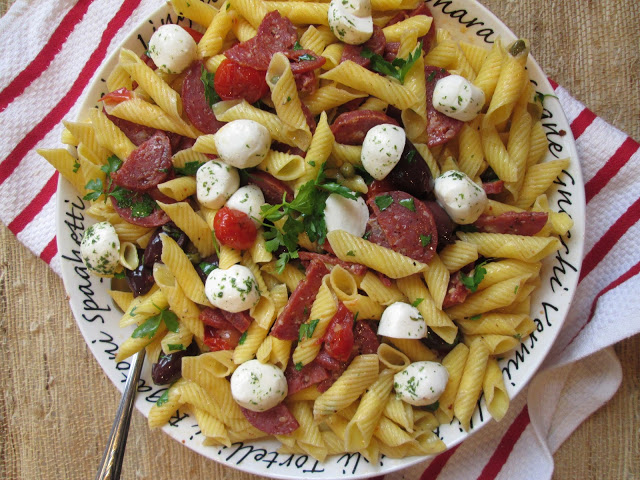 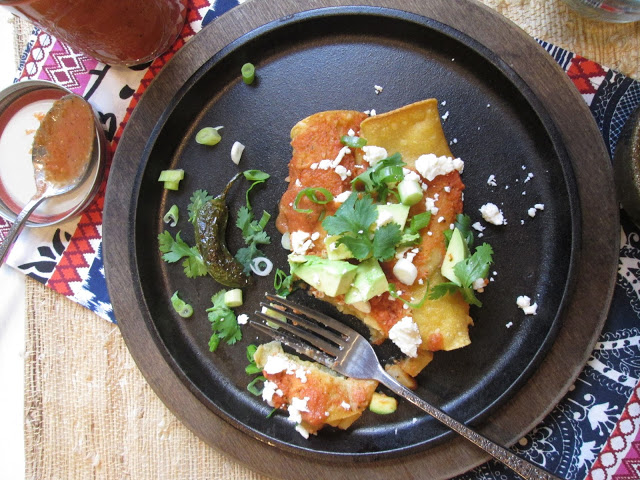 Lozza's Corn and Bacon Muffins
(recipe found on this post)