Ravioli with Creamy Tomato Sauce and Cheese and Rosemary Breadsticks 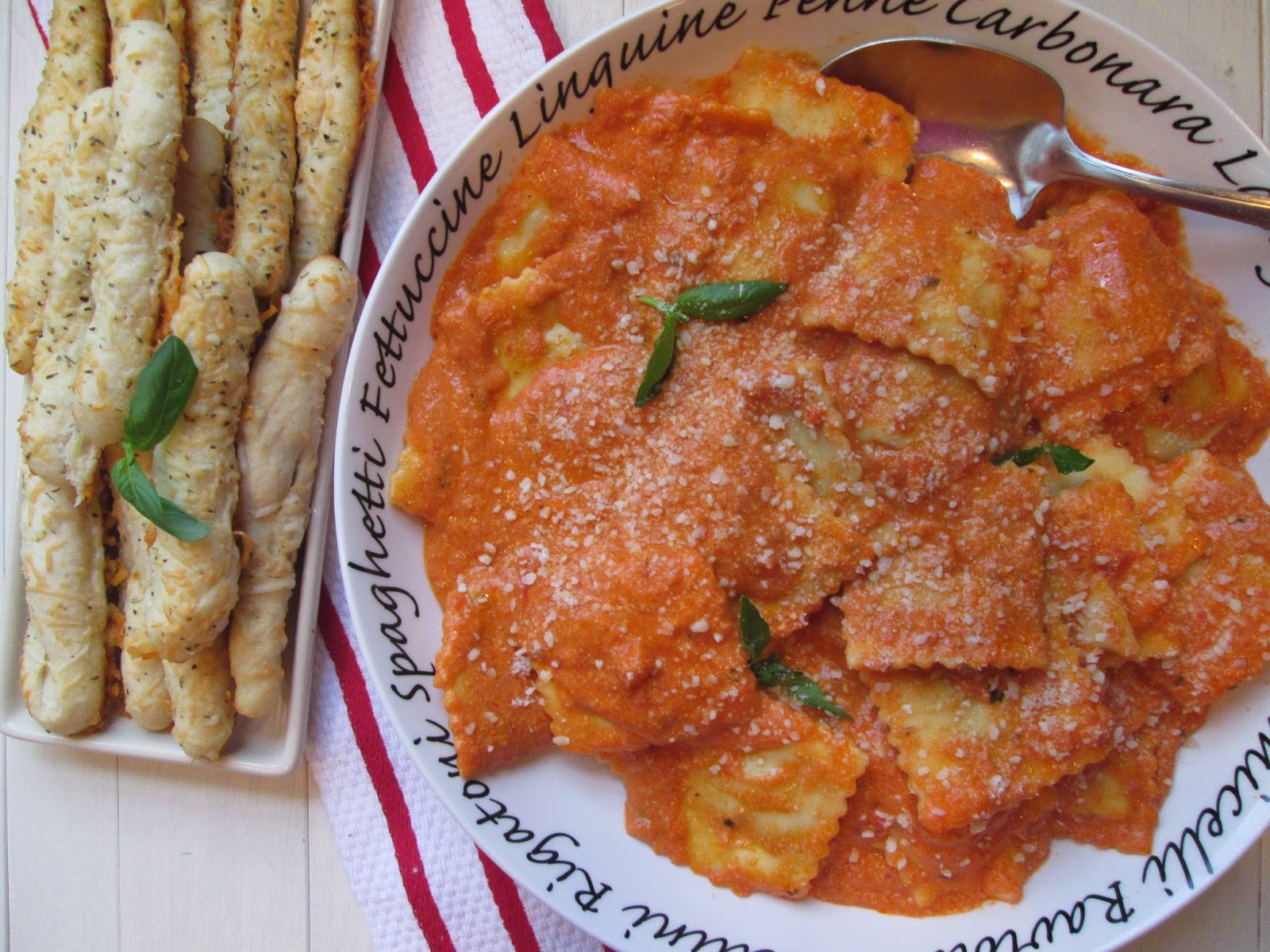 Let's talk tomato sauce.  Sometimes tomato sauce can be somewhat acidic. When my daughter was little she didn't care for that sharp flavor so I would tone down the tomato sauce by adding a little cream.  As a bonus, the cream caused the tomato sauce to turn pink, and since pink was her favorite color it was an all around success.  The addition of cream was such a hit that I rarely make any tomato sauce without adding a splash, or two.

This recipe for Ravioli with Creamy Tomato Sauce caught my attention because it calls for ricotta cheese to be melted into the tomato sauce.  I was interested in trying this new version of creamy tomato sauce and I must say we did enjoy it.  After all, it's certainly hard to argue with idea of adding any kind of cheese to tomato sauce.  This ravioli was a fast and easy family dinner that was loved by all.  We also loved dunking the cheesy breadsticks into the leftover sauce.  Delicious! 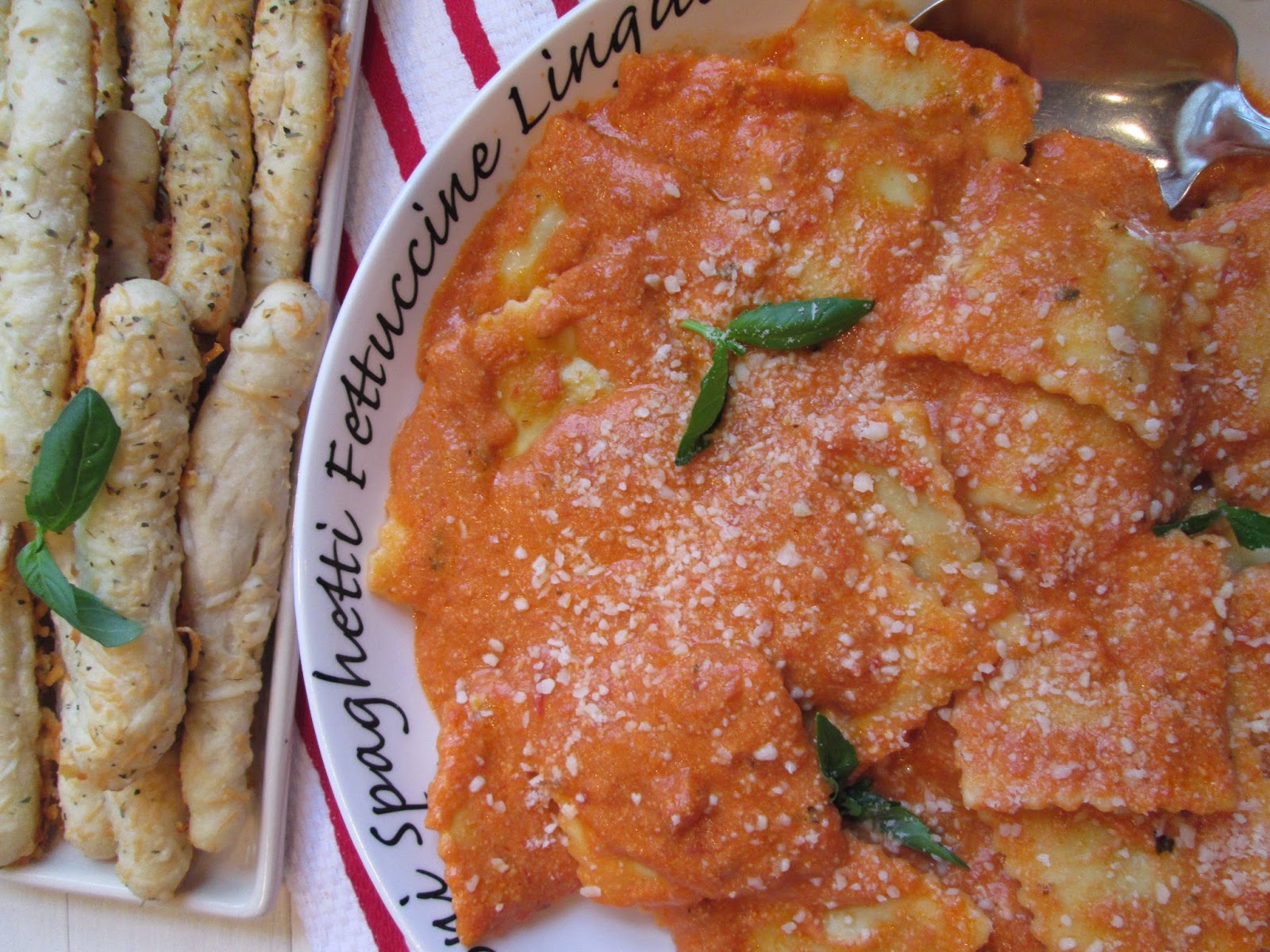 Bring a large pot of salted water to a boil. Add about 1/4 cup olive oil to the water to help prevent pasta from sticking. Add the ravioli and cook until al dente, stirring occasionally, about 5 minutes. Drain the ravioli, reserving 1/2 cup of the cooking water. Toss the ravioli with the remaining oil to coat.

Meanwhile, bring the marinara sauce to a simmer in a medium saucepan over medium heat, whisking often. Whisk in the ricotta and enough reserved cooking water to thin the sauce to desired consistency. For a thicker sauce, use less pasta water; for a thinner sauce, add more water. Return the sauce to a simmer. Season the sauce to taste with salt and pepper.
Gently toss the ravioli with the creamy tomato sauce, sprinkle with Parmesan cheese and basil, and serve immediately.
Cheese and Rosemary Breadsticks
Recipe found on Food Network
by Giada De Laurentiis
Serves 4-6

Bake until the breadsticks are golden brown, about 10 to 15 minutes. Transfer the warm breadsticks to a basket and serve. 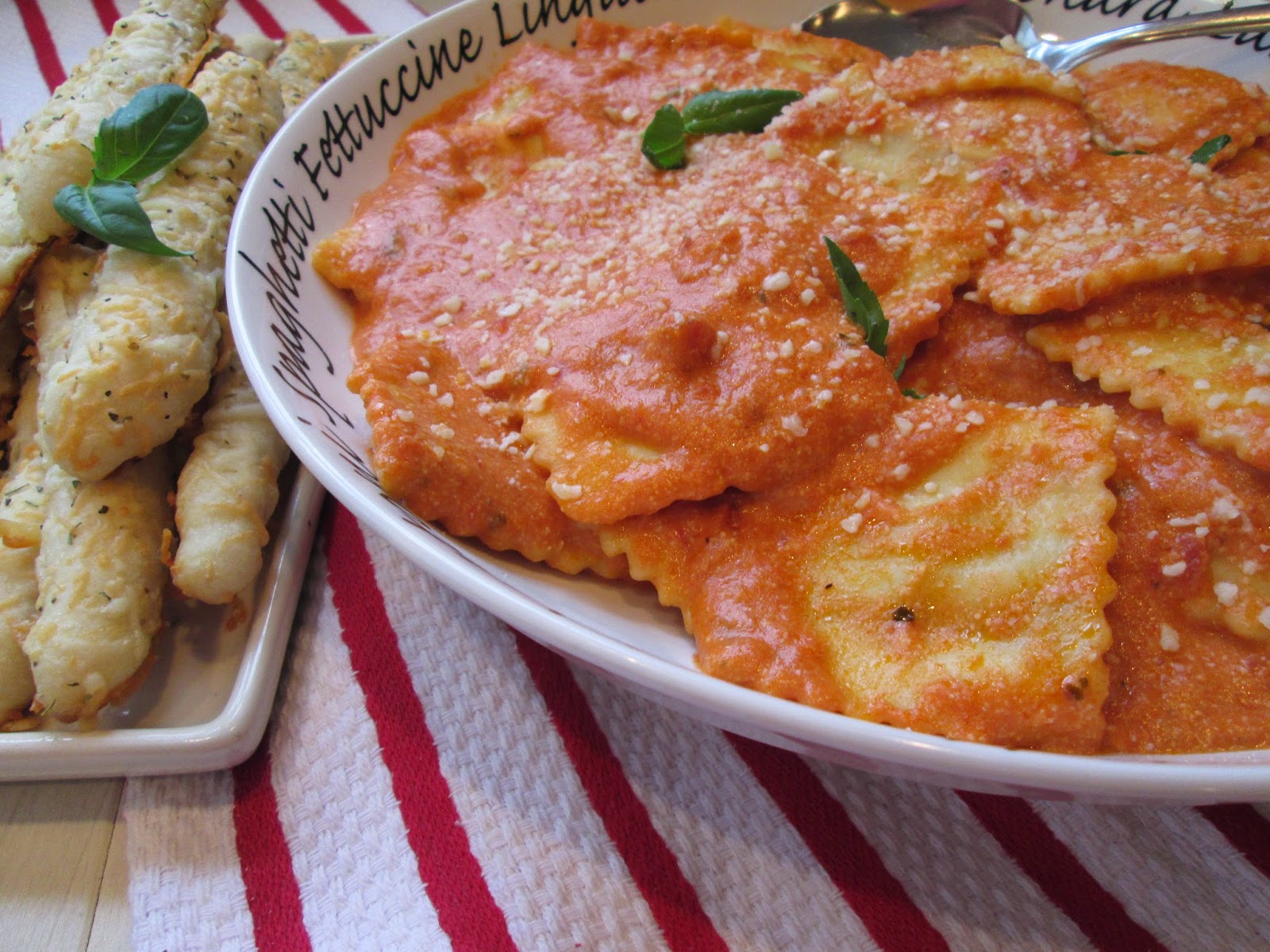 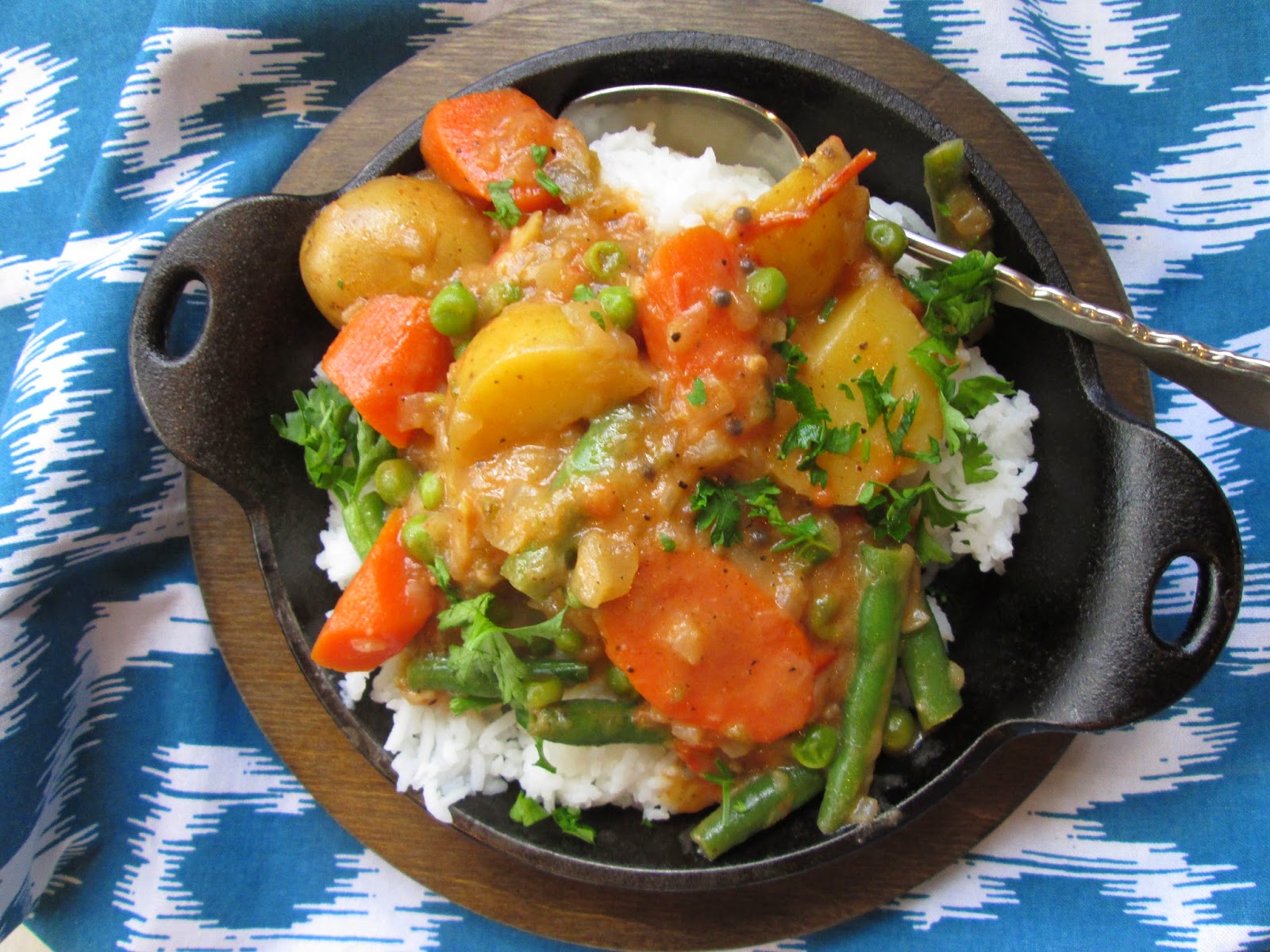 While this recipe starts off like a Madhur Jaffrey recipe that's where the comparison ends for me.  Madhur's recipes were always full of spice and lots and lots of flavor. This recipe for Kayi Korma Curry is courtesy of Diana Henry and it's an extremely mild vegetable curry.  It's packed with onions, garlic, chilis, carrots, tomatoes, potatoes, peas, and green beans. These ingredients usually produce big flavors but not so much in this case. This was an extremely mild curry that just didn't deliver the big flavors I was craving.  nstead I found myself adding more chili, ginger, garlic, coriander, and lots of pepper and salt.  I never seemed to find a good balance and in the end it just fell flat for me.  That's okay though.  I enjoy learning what works for me and what doesn't. 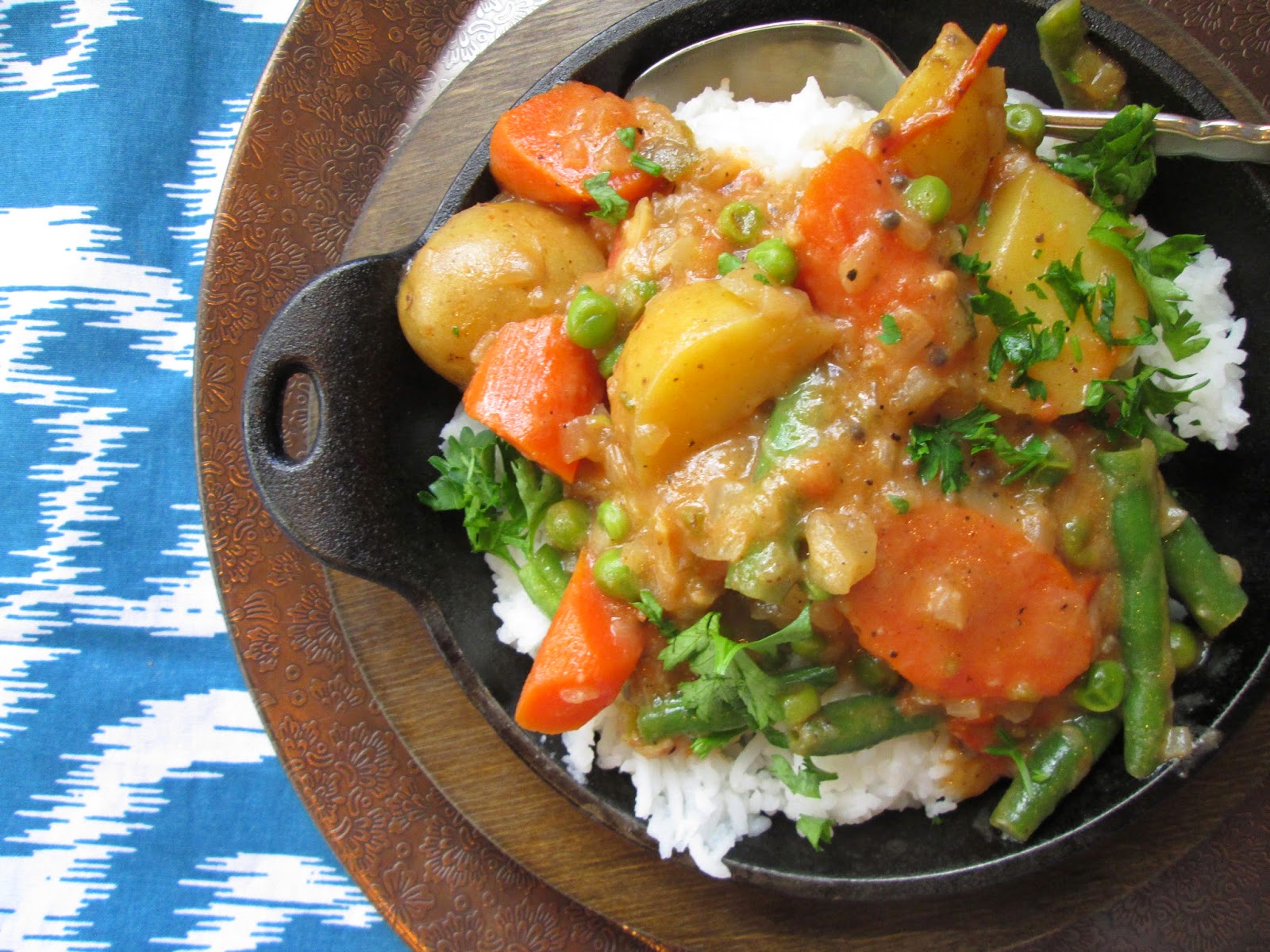 Heat the oil in a pan and add the mustard seeds. As soon as they start to pop add the onions. Fry over a medium heat until they are a good brown colour. Do watch to make sure they don’t burn. Add the garlic, ginger and chilli and cook for a further five minutes or so, then add the ground coriander and turmeric and cook for a minute to release the spices’ fragrance. Add the tomatoes, carrots and potatoes, stir everything round and cook for about four minutes to soften the tomatoes, then add enough water just to cover the vegetables, followed by the coconut cream. Season and bring to just under the boil. Turn down to a simmer and allow the vegetables to cook until they are almost tender. You may have to add more water. The sauce should just coat the vegetables. The peas and beans only need to cook for about three minutes, so add them towards the end of the cooking time. Add half the lime juice, taste, adjust the seasoning and decide whether you want more lime juice. Stir in the chopped coriander just before serving and decorate with a few whole sprigs. Serve with plain boiled basmati rice. 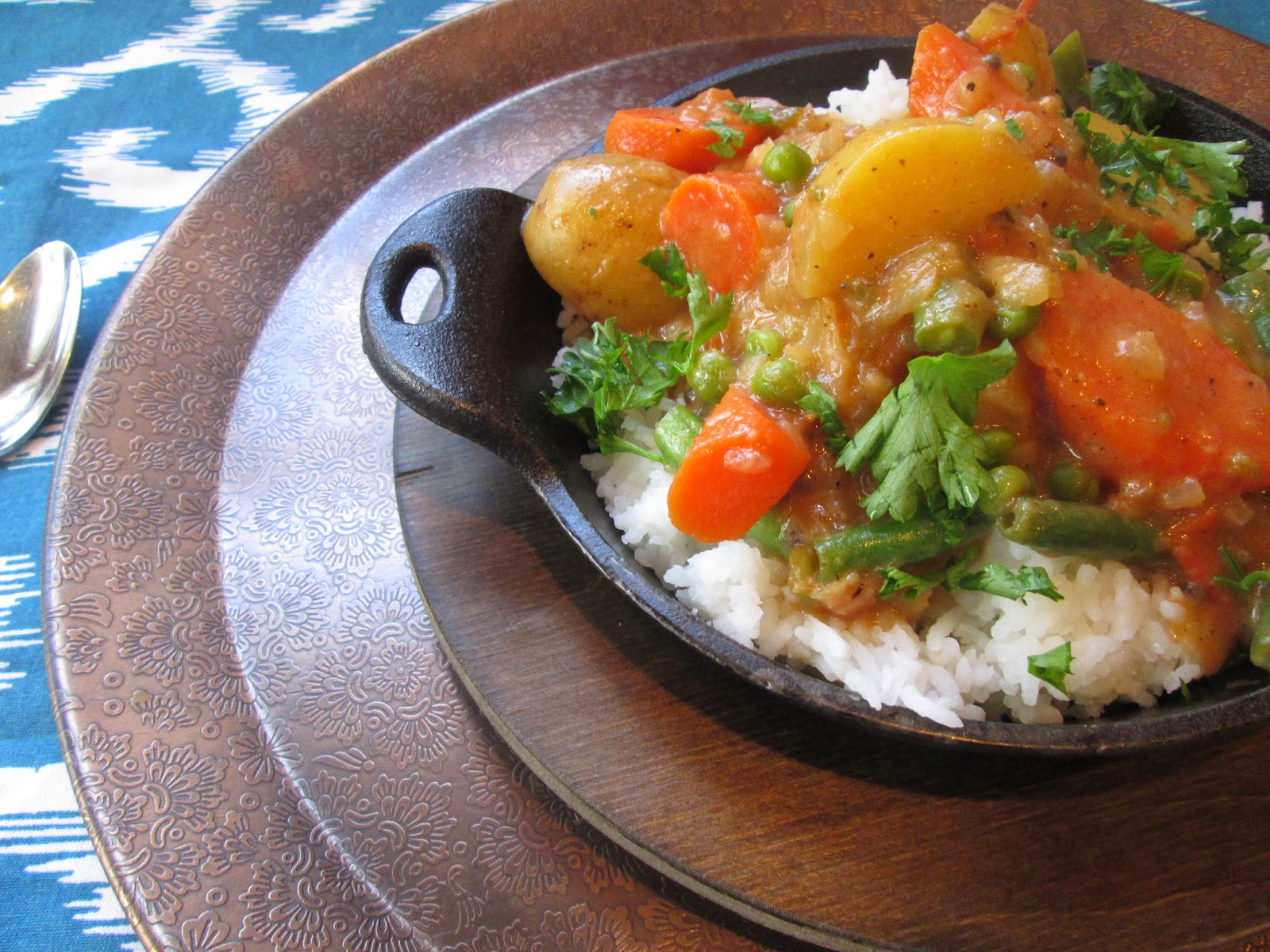 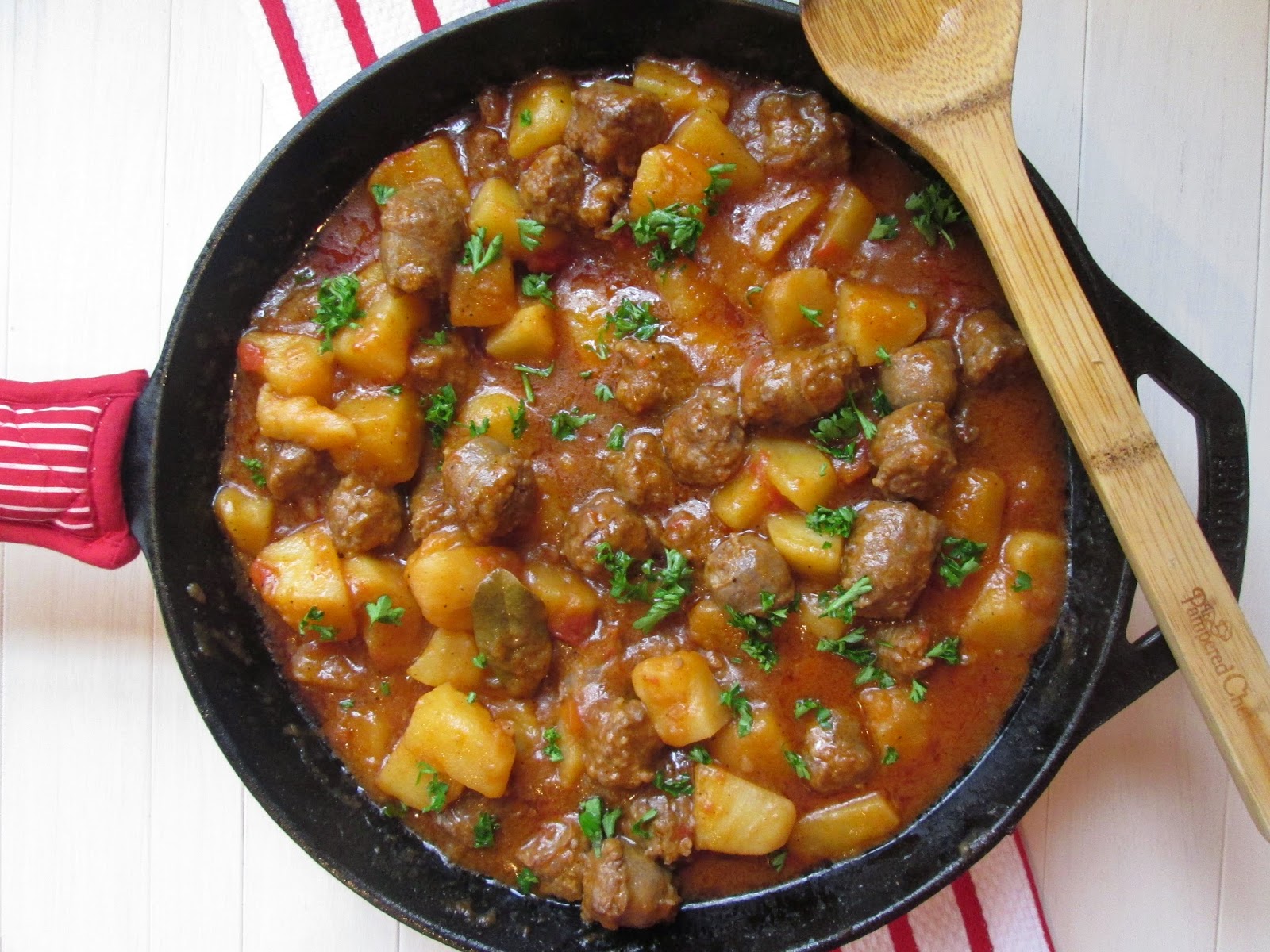 It's Mystery Box Madness week over at I Heart Cooking Clubs.  Mystery Box week is quite a challenge mainly because the possibilities are endless.  We have a list of ten mystery ingredients from which we need to choose at least three ingredients and then we choose any recipe from one of our eleven IHCC chefs.  It's always somewhat overwhelming for me because there are so many different ways to combine the ingredients and so many different chefs' recipes to chose from.  Decision making...not my strong suit.

This week our mystery ingredients were: potatoes, buttermilk, flour, paprika, onion, any kind of leafy green, lemon, honey, shrimp, and feta.  Originally I wanted to make fried chicken but I waited until the last minute and my chicken didn't have enough time to marinate in the buttermilk.  Procrastination...the story of my life.  So, I chose to look through my Tessa Kiros cookbooks and when I saw her recipe for Sausage and Potato Goulash I knew I had a winner.  Tessa's goulash featured three of the mystery box ingredients (potatoes, onion, and paprika), it's easy with quick clean up (one pot meal); and extremely family friendly! This recipe was so fabulous! We loved the thick creamy paprika flavored sauce and the velvety texture of the potatoes.  It was a definite crowd pleaser! Highly recommend it if you have some meat and potato lovers. 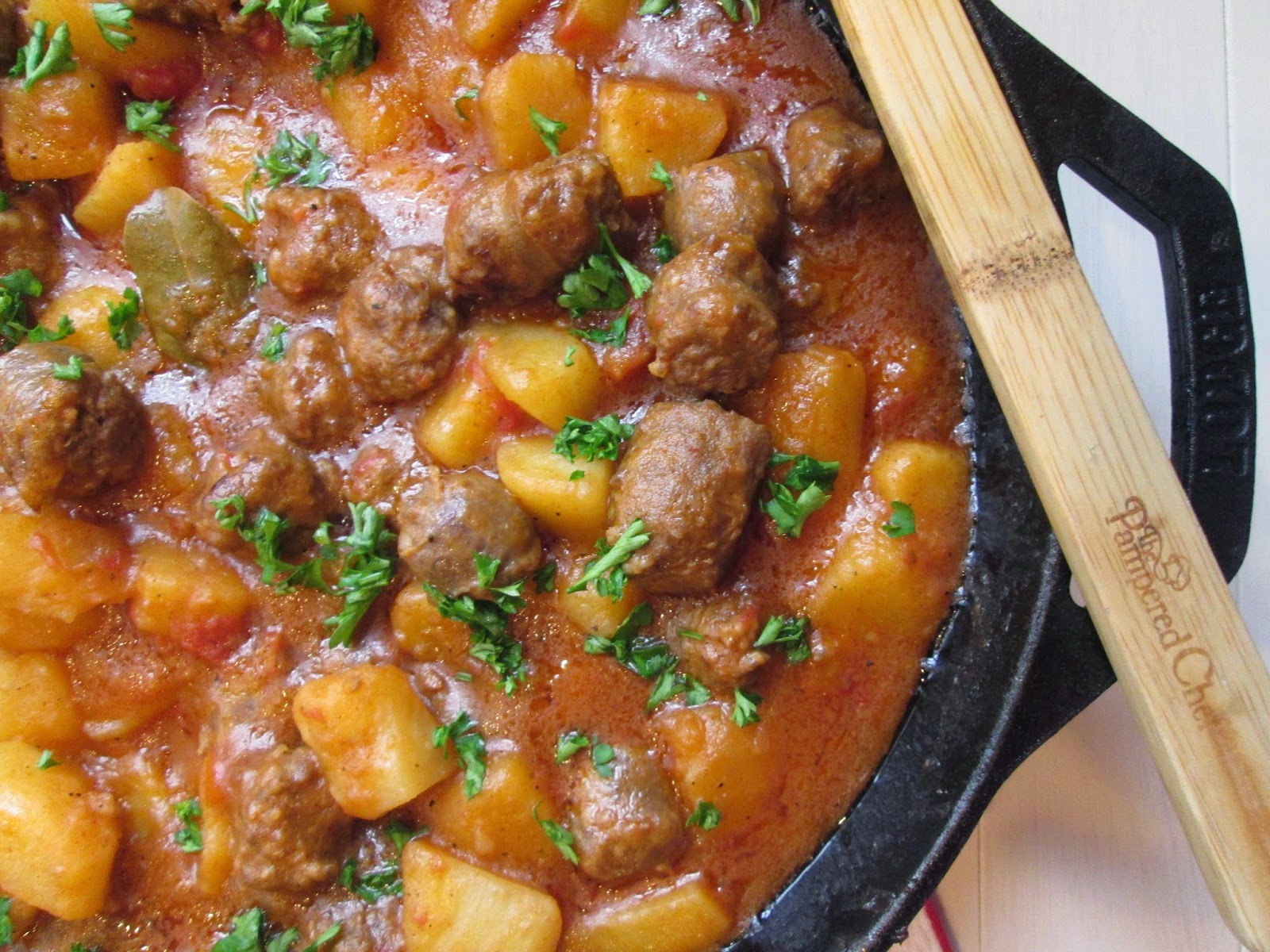 Note: The goulash wasn't as thick as I'd hoped so I took out 4-5 tablespoons of the sauce, added 1 tablespoon of cornstarch to it, mixed well, and stirring it into the goulash and continued to cook until thick, as desired.

Slice the sausages into rounds about 1/2 inch thick.  Heat the oil and butter in a large heavy-bottomed pan (cast iron is best) and saute the onion for a couple of minutes over medium heat.  Stir in the paprika, cook for 30 seconds or so, and then add the sausages.  Continue cooking, stirring fairly often, until the sausages turn golden in places.  Add the potatoes, tomatoes, cinnamon, bay leaf, and 2 cups of hot water.  Season with salt and bring to a boil.

Lower the heat, cover, and simmer for about 20 minutes until the potatoes are softened and the goulash is thick and stewy.  Stir with a wooden spoon from time to time and loosen the bits at the bottom to make sure they don't stick.  If the potatoes are not quite done after that time, take the pan off the heat and leave it with the lid on for the potatoes to continue steaming (see also note above regarding thickness of goulash.* Mix the parsley through and serve hot directly out of the skillet. 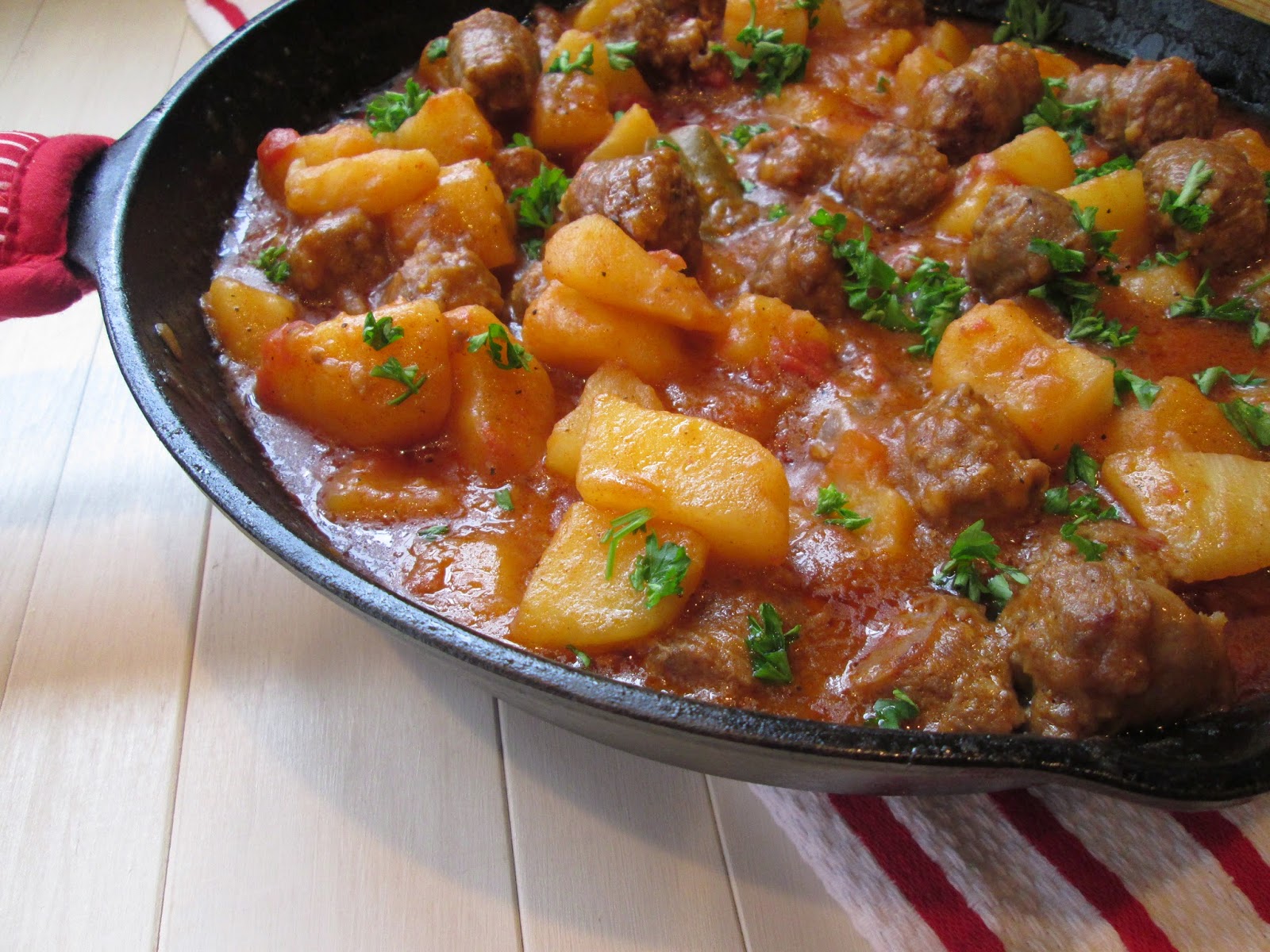 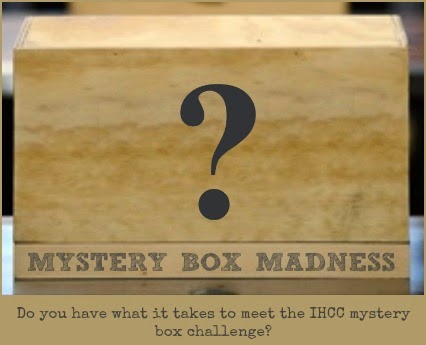 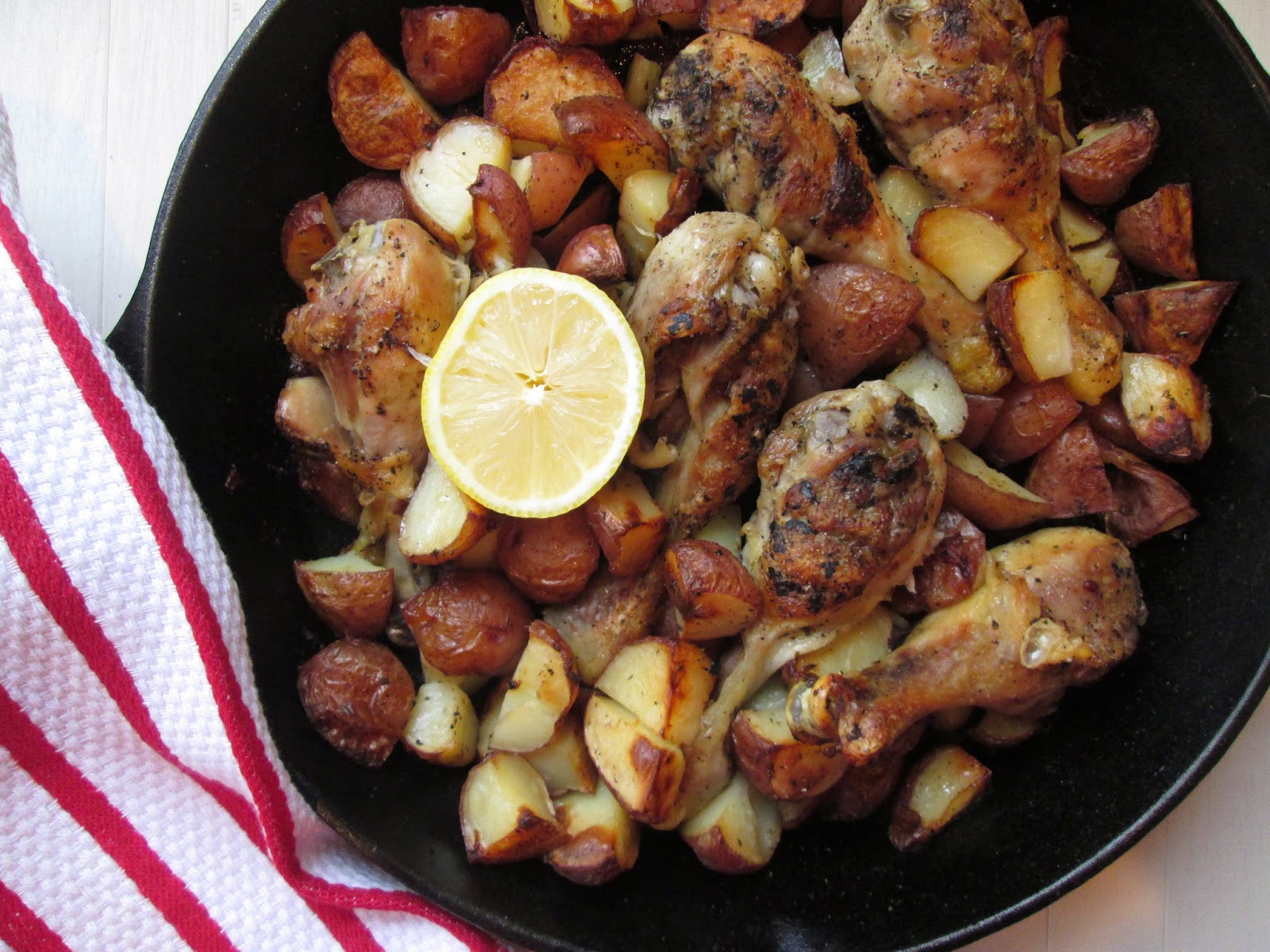 No school and no work for the last 16 days, but like all good things, that ends tomorrow. Back to the grindstone.  So as we prepare the backpacks and the lunchboxes we slow down and enjoy one last lazy day before the madness ensues.  Start your ovens.  Cue the Netflix.  Get comfy.

This is a cozy little Sunday Supper.  A cast iron skillet brimming with simple roasted chicken and baby potatoes adorned with fresh steamed green beans and a good drizzle of the most bright and refreshing garlic cream dressing.  Wow does that dressing jazz things up a bit! This is everything I want winter comfort food to be.  It's familiar but has a fun little twist with the dressing, it's healthy yet very comforting, and most of all it's a great family-pleasing meal! It was the perfect thing to enjoy on our last lazy day of Christmas break. 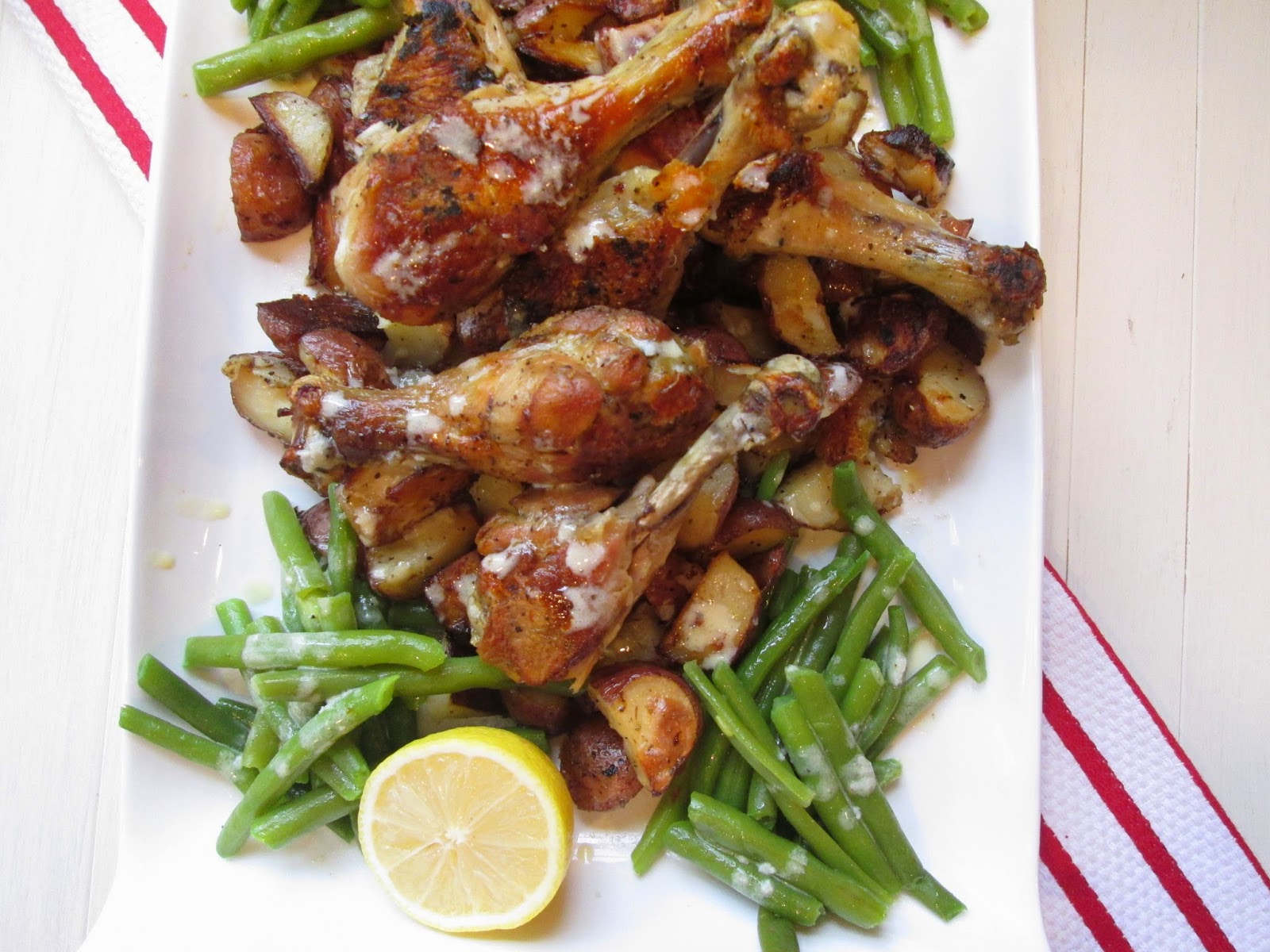 Preheat the oven to 400F.   Season the chicken with salt and pepper to taste.  Place the oil in a large (12") cast iron skillet over medium heat.  When the skillet is ready (hot), add the chicken legs and sear for a few minutes on each side until golden brown.  Place the quartered potatoes and rosemary (if using) in the skillet with the chicken and put the skillet into the oven.   Roast for about one and a half hours, until the potatoes are tender and golden.  Shake the potatoes around a bit while cooking – dark, crusty edges are especially nice.


While the chicken is roasting, prepare the dressing. Put the mustard, garlic, balsamic and lemon juice into a small bowl and whisk together with a fork. Season and whisk in the oil followed by the cream. Check for seasoning – it might seem slightly strong but it's going to dress potatoes so needs to balance them.

Also, during this time, steam or boil the beans for three to four minutes or until slightly tender but still al dente. Rinse in cold water, drain and gently pat dry with a clean tea towel.

Remove the chicken and potatoes from the oven and place onto a platter with the green beans.  Drizzle the garlic cream dressing over top the platter, reserving some dressing to serve on the side.  Garnish platter with lemons and herbs, if desired.  Serve immediately and enjoy! 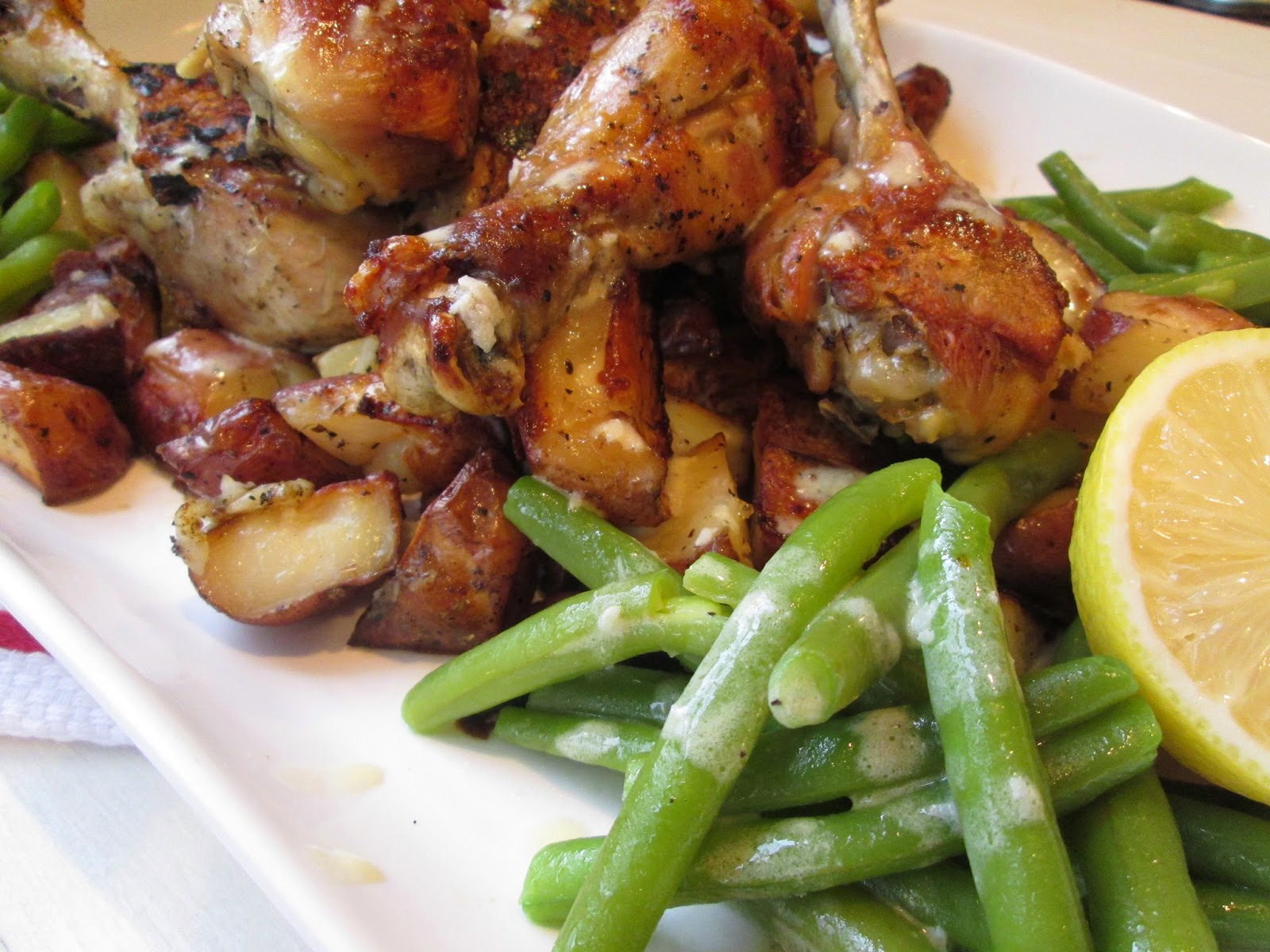