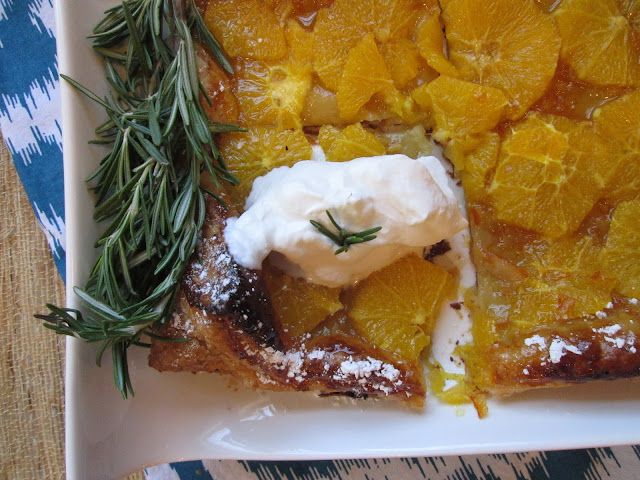 I had high hopes to make a really special new Brunchmas dish this week, but time got the best of me. I was too busy doing last minute shopping, wrapping, decorating, baking, and cooking up non-blog dishes.

So, here is a recap of some of the dishes I think would be Brunchmas-worthy!

Ottolenghi's Shakshuka It certainly fits the bill as far as representing all the Christmas colors, right? The red and green and front and center and the dish is healthy, light, fresh, and delicious. Plus, it's gorgeous and can be served family style or individual. 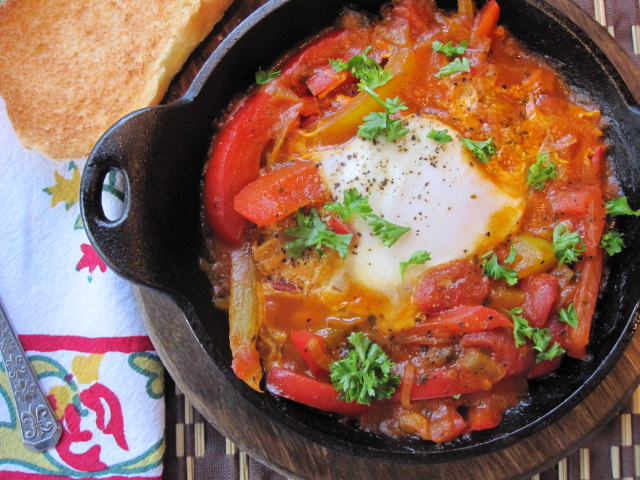 Giada's Breakfast Tart and Fruit Salad with Honey-Lime Syrup I made this breakfast tart years ago, but I still remember it fondly. Pancetta, mascarpone, Gruyere, and green onions really make a flavorful taste sensation! Plus, the recipe is kinda perfection! Giada's Fruit Salad with Honey-Lime Syrup was a wonderful accompaniment and let's face it....fresh fruit isn't what it's meant to be during the winter months so the honey-lime syrup really brings it all to life! 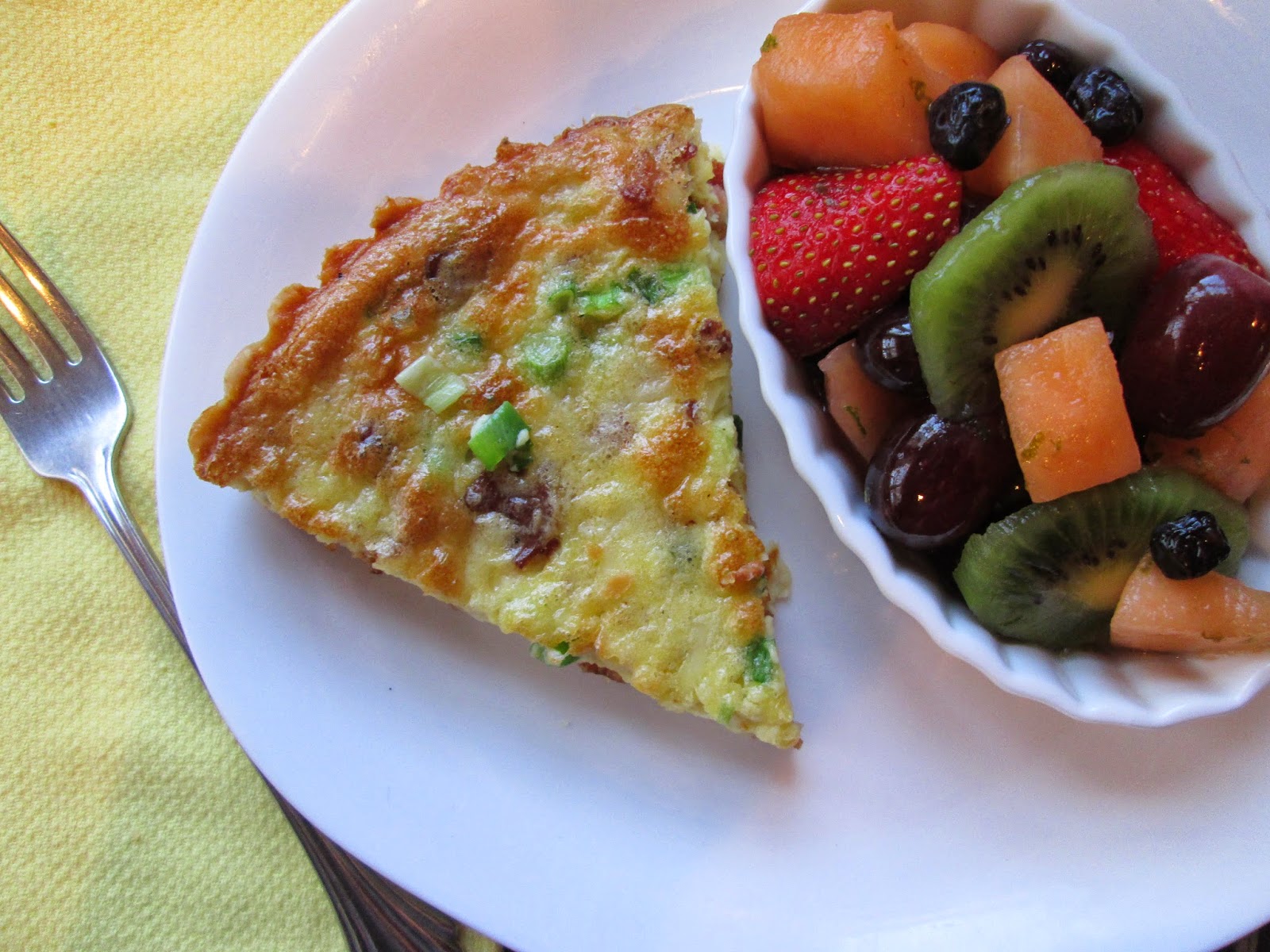 Ina's Tri-Berry Oven Pancakes No one really wants to stand by the stove flipping pancakes on Christmas day, so Oven Pancakes or Dutch babies are perfect for Brunchmas! Ina Garten's recipe is the perfect choice for Christmas Day! Serve family-style or individual and have a nice selection of fruits. 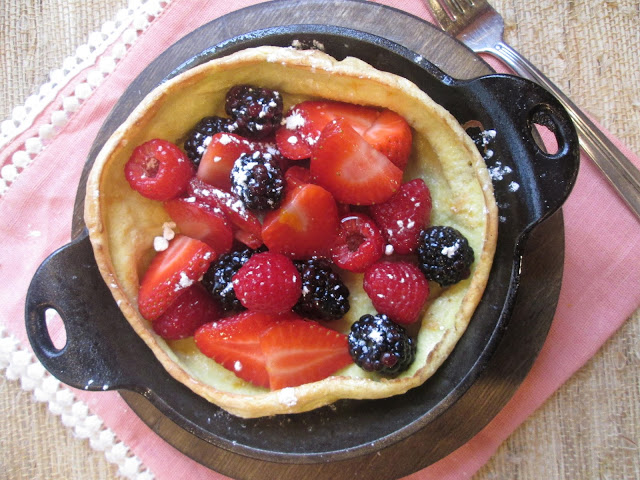 Herbed-Baked Eggs These Herbed-Baked Eggs are hands down the easiest way to do any brunch, while also making something that feels special. All you need is a baking dish and some butter and cream. Crack your eggs into the dish and then top with various herbs, cheese, and garlic. These could be personalized to suit all tastes and flavor profiles! Love them! 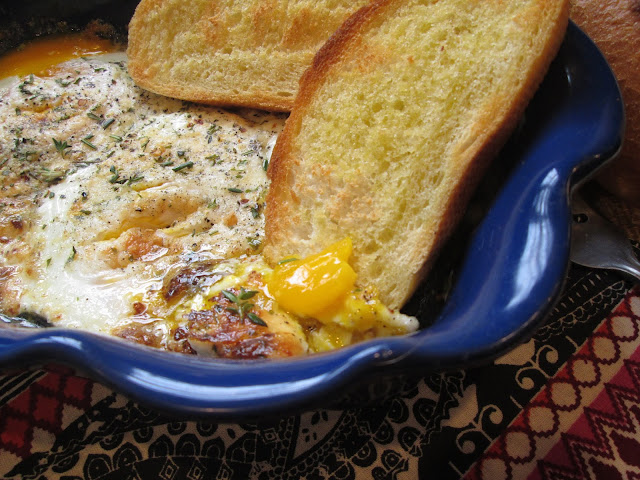 Winter Citrus Tart w/ Rosemary Whipped Cream  Look no further if you need a special wintery brunch dessert because Curtis Stone's Winter Citrus Tart with Rosemary Whipped Cream is perfect for the holidays! I mean oranges are all the rage at Christmastime, right? They are juicy and delicious and in season! Plus, we decorate with them, we make simmer pots with them and we make desserts and cocktails with them! This is THE PERFECT and easy dessert for your Brunchmas.
Plus, it's worth mentioning that this glorious dessert takes only a mere handful of ingredients: puff pastry, orange marmalade, oranges, cream, and rosemary! It is the epitome of easy, beautiful, and delicious! Everyone will be so impressed! 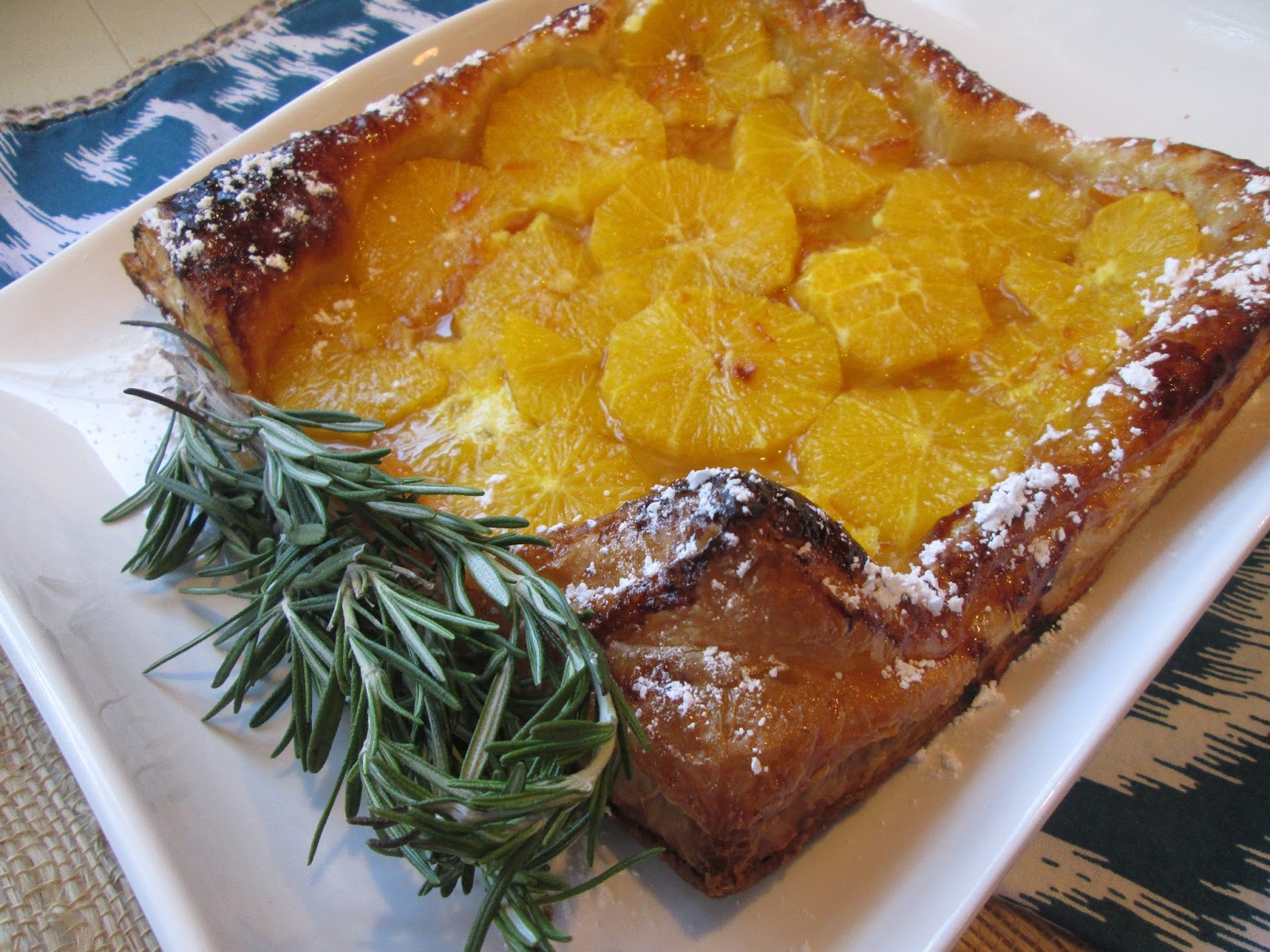 I hope everyone celebrating had a wonderful and Merry Christmas!
Posted by Kim at 5:44 PM 3 comments: 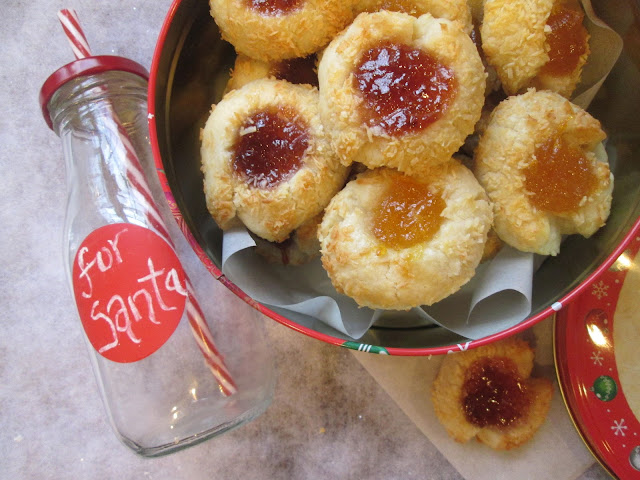 My mom and I used to make a jam thumbprint cookie like this when I very young. I believe ours were rolled in crushed walnuts before placing jam in the center. In truth, I think I like that version the best, both for nostalgia and also for taste, however these are lighter and sweeter and definitely delicious in their own right!

Ina's thumbprint cookies have a shortbread base, which goes over real well with my husband who loves all things shortbread! As mentioned above, Ina also rolls her cookies in coconut flakes before inserting the jam in the center, which really lightens things up from the typical nutty version, and I think creates an altogether different background.

Ina wrote the recipe for both raspberry and apricot jam, but I have a huge variety of jams, jellies, and preserves and with the coconut flavor in mind I wanted to create somewhat of a more tropical version so I chose some mango preserves. That combination was not for my husband, so he wanted to have just plain strawberry for his. I went with some strawberry-rhubarb perserves, but shh....don't tell him and he won't even know.

The dough has to chill and it is somewhat finicky to roll into balls, cracking and what not, but it is not that bad as the warmth of your hands makes the dough balls nice and smooth. They take a quick dip in an egg wash, then a roll in the coconut flakes, then you make an indentation with your finger and insert the jam before baking.

These cookies are light and sweet with just a hint of coconut flavor. I like both the mango and the strawberry-rhubarb flavors, but in my opinion, the mango goes so much better with the coconut. The funny thing is, my husband agreed! He said I could've made them all mango.

I think these would make for a great addition to your holiday cookie collection! So many of  holiday cookies are rich and decadent and these feel like and fruity and refreshing in comparison. These are a wonderful and welcome change.

Merry Christmas and Happy New Year to all who are celebrating! 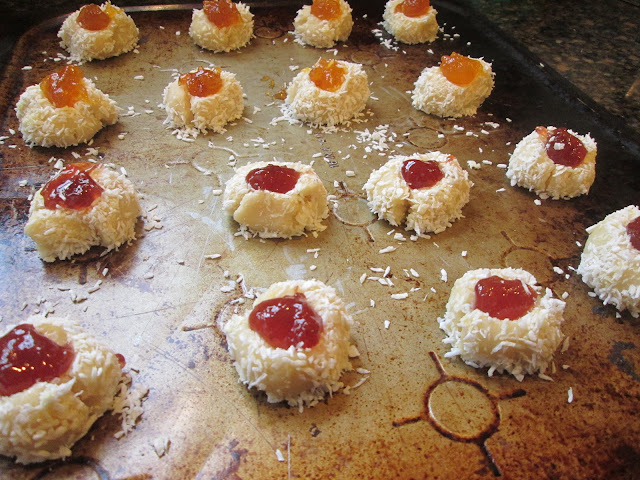 Raspberry and/or apricot jam (or any jam you like)*

Preheat the oven to 350F. In an electric mixer fitted with the paddles attachment (or with an electric mixer because you don't have a paddle attachment), cream together the butter and sugar until they are just combined and then add the vanilla. Separately, sift together the flour and salt. With the mixer on low speed, add the flour mixture to the creamed butter and sugar. Mix until the dough starts to come together (mine didn't, probably because I didn't have the right paddle attachment, but I just used my hands and that worked too). Dump on a floured board and roll together into a flat disk. Wrap in plastic and chill for 30 minutes.

Roll the dough into 1-1/4 inch balls (if you have a scale they should each weight 1 ounce). Dip each ball into the egg wash and then roll it in coconut flakes. Place the balls on an ungreased cookie sheet and press a light indentation into the top of each with your finger. Drop 1/4 teaspoon of jam into each indentation. Bake for 20 to 25 minutes, until the coconut is golden brown. Cool and serve. 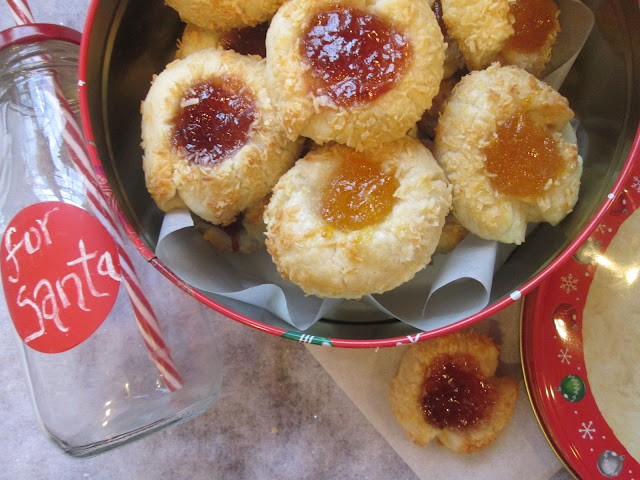 Festive Appetizers For The Holidays! 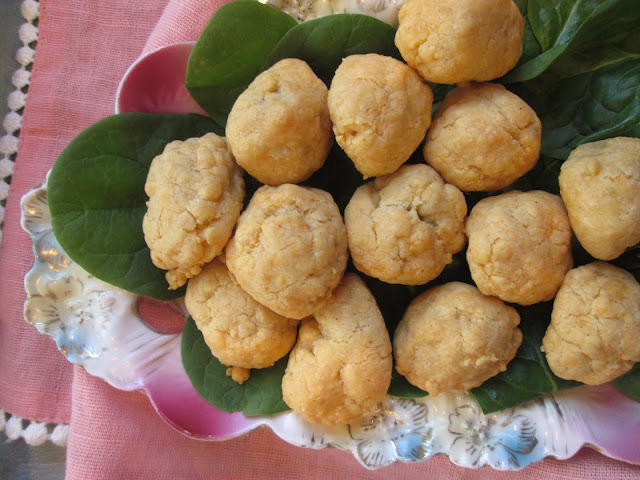 There are so many wonderful festive holiday appetizers! I had planned to share a new one with you all today, but it just wasn't in the cards. I pulled a muscle in my back earlier in the week and it was starting to improve until Saturday night when the tornadoes wrecked havoc all over Kentucky. I woke up at 2:22 in the morning to sirens blaring and the weatherman shouting that "tornadoes were imminent and spotted nearby, moving a mile a minute." He kept shouting "seek shelter immediately." Well, it put the fear of God in me and let's just say I moved my 46 year old body way too fast, re-injuring my back somewhere in the panic of seeking shelter immediately. I can't even complain about my back though because we are all safe. There are too may who cannot say the same.

So, I will count my blessings and rest my back and share TWO FESTIVE APPETIZERS that I think would make a great addition for any holiday party! First up is Ruth Reichl's Retro Baked Cheddar Olives, followed by Ina Garten's Kielbasa with Mustard Dip. Both dishes would be the hit of any party and both would be great served warm or at room temperature!

Everyone needs some delicious and easy appetizers up their sleeve for the holiday season and these are just the thing. No fuss, no muss. Just make them, serve them, and you're golden! Click on the recipe title to be directed to the recipe! 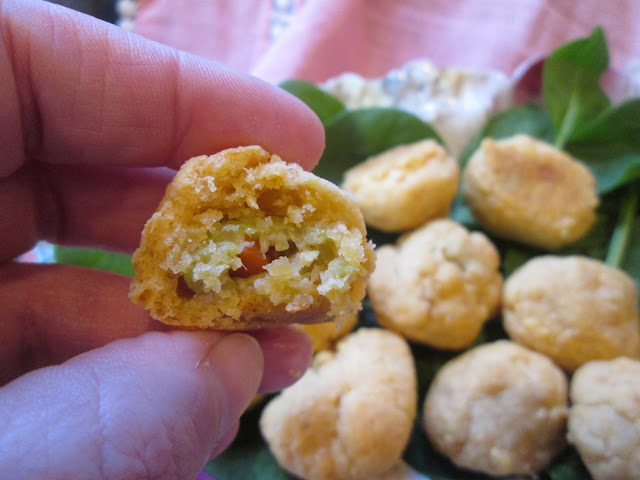 A retro appetizer if there ever was one, these Baked Cheddar Olives are unique and addictive! I think they would make the most wonderful festive appetizer for your holiday party. The green olive with the red pimento center brings the colors of the season to the table and baked cheddar coating is just like those cheese crackers everyone loves.These tasty pop-in-your-mouth goodies will be the talk of the party! 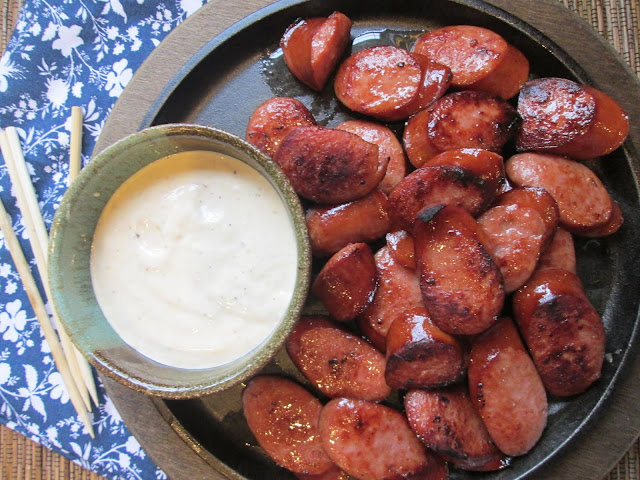 If you're in the mood for something a bit more substantial, or something that is rather dip-worthy, then Ina's Kielbasa with Mustard Dip is totally the move! Those savory and flavorful kielbasa nuggets go so well with the zippy mustard dip. It's like a burst of flavor in your mouth! I made these for the first time a little over a year ago and I bet I've made this 15 times since then. These would be a total hit at any get together or party! 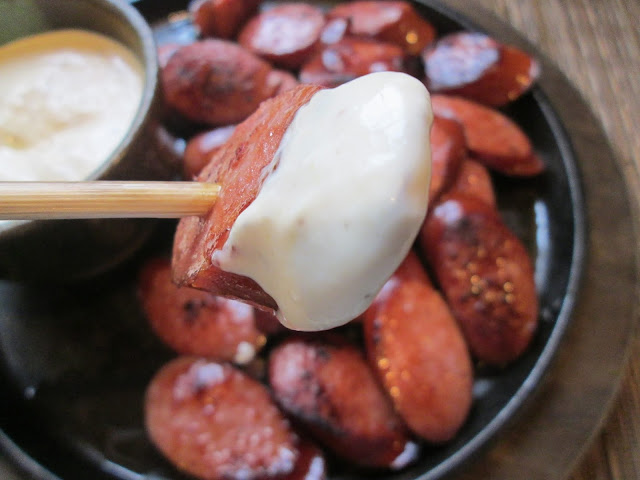 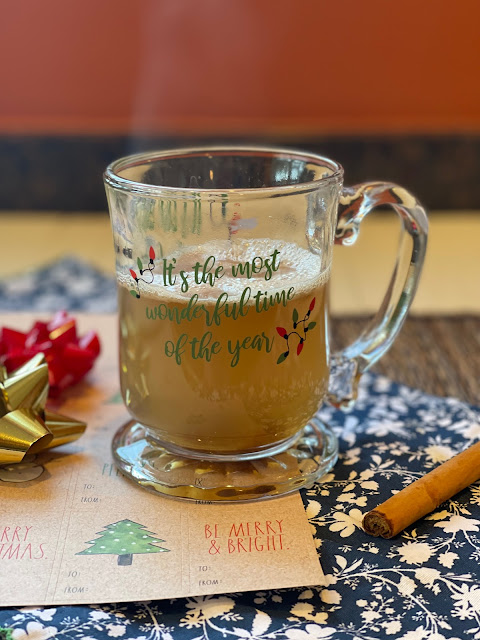 Have you ever drank butter? I haven't. Until today!

I've always wanted to try the notorious Hot Buttered Rum. It just seems like THE ULTIMATE winter cocktail, both nowadays and way back when. If a drink has that much notoriety then it just has to be good.

I start with some Carta Negra rum, otherwise known as black rum. Black rum is aged in barrels, is darker in color, and some say has deeper, richer flavor.

Then you need some butter. Yes, you are going to drink butter. Just get over it and try not to think about it. People have been doing it for hundreds of years.

Now, I did some research and there are a couple different methods for making a Hot Buttered Rum. Some melt the butter in a pan with the spices, then add the rum and the water. Others make a butter mixture, place the butter in the bottom of the glass or mug, heat the rum and water in a pan and simply pour it over the butter. I did the latter option, but I really don't see it making a difference in the end. The butter will melt either way.

Most recipes flavor the butter with sugar or honey, cinnamon, cloves, and sometimes vanilla. I think this is something you can really make your own. Once I saw the addition of vanilla there was simply no turning back. I had to have the vanilla. 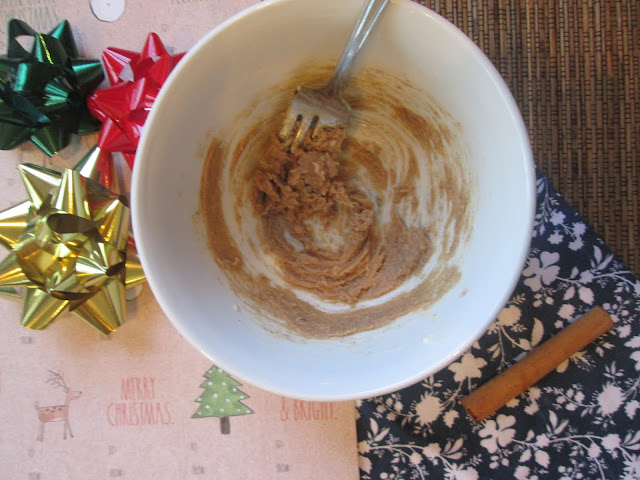 I began with about a tablespoon of room temperature butter in a small bowl. I have to admit I was a little queasy thinking about drinking that tablespoon of butter in a drink, but I was committed. I added a pinch of cinnamon, a teaspoon and a half of brown sugar, and some vanilla bean paste to taste. I mixed it up and added it to the bottom of my glass toddy mug. Then I added about 1 cup of water and 1.5 ounces of black rum to a pan and heated it up until it was close to boiling. I poured the rum and water mixture over the butter, stirring with a spoon, and garnished with a cinnamon stick.

I have to admit that at first I wasn't sure, mostly because the rum was very strong. However, I am a total lightweight and pretty soon I started to feel my cheeks heat up and a rather pleasant calm settle over me. I have to admit to really loving this drink. If you're a lightweight like me, one will do!

Just like the Hot Toddy, the Hot Buttered Rum is like a giant hug, warming you up from the inside out. I'm not lying, these types of drinks will really warm a girl up!

I see many Hot Buttered Rums in my future! 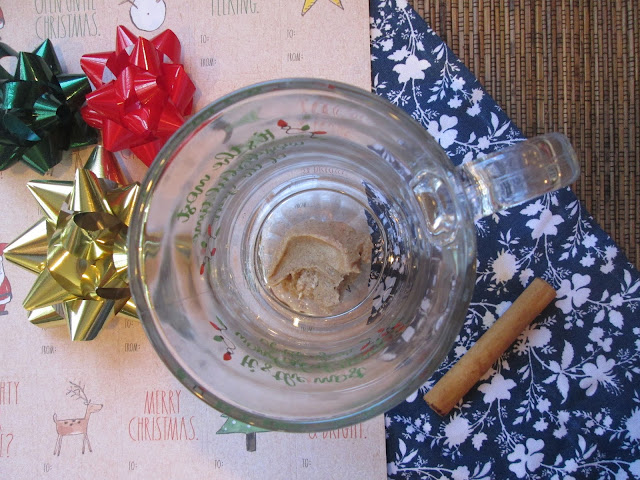 pinch of cinnamon, or to taste

Note: I chose option#2 below.

Option#1: Over a low heat, melt the butter in a pan with the sugar and spices. Turn off the heat and add the rum and stir well. Pour the contents through a sieve into a mug or toddy glass and top with hot water, to taste. Garnish with a cinnamon stick and grated nutmeg.

Option#2: Mix up the butter, brown sugar, cloves, cinnamon, and vanilla in a small bowl. Using a spoon, gather up the butter and place into the bottom of a mug or toddy glass. Heat the rum and the water (I used 1.5 - 2 ounces rum to 1 cup water). Heat the rum/water to the desired temperature and pour over the butter, into the mug, stirring to combine. Garnish with a cinnamon stick and grated nutmeg. 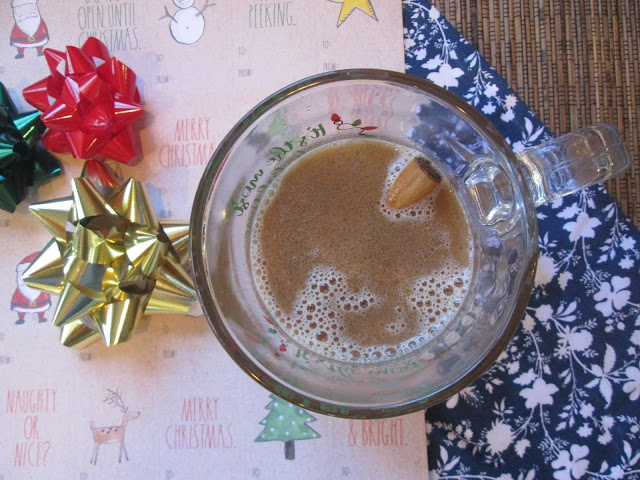 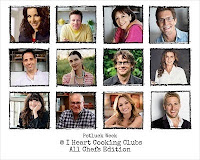