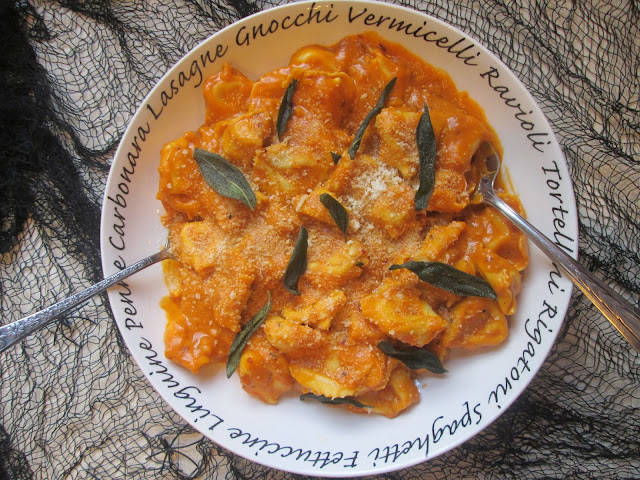 I really wanted to make Half-Baked Harvest's Sage Browned Butter Chicken Pot Pie this week, but necessity and time dictated otherwise. You see, I have this superpower called hoarding and it gets me into trouble. I had no business buying more food until I used up the hoards of Costco-sized tortellini, can after can of coconut milk, can after can of pumpkin, packet after packet of sage, and bag after bag of Parmesan.

True story. At the beginning of the pandemic I was afraid of running out of regular cow's milk, so I found myself buying can after can of coconut milk, 12 cans to be exact. When I hoard things, I don't play around. It's kind of a problem, unless of course, there really is an apocalypse. I will not be caught without.

So, thanks to my hoarding abilities, this glorious and spooktacular dish was able to grace my table on a day when ghosts and goblins came to town and candy was passed out at a spectacular rate. It is a hearty and wonderfully creamy and comforting meal for any day of the week, but would make for a great weekday meal on a busy night. I actually loved it to pieces and can't wait to eat the leftovers for lunch throughout the week.

Tip#1:This recipe was originally made with vodka, but I didn't have any of that so I subbed white wine and changed the title to Brown Butter Pumpkin Alla Grigio Tortellini. I don't really know if that works or not, because my wine didn't have a screw on lid so I felt compelled to drink it all. Which leads me to tip #2.

Tip#2:If you only plan on cooking with wine (and not therefore drinking it) please make sure you get one with a screw top lid so you can keep it for further cooking. This will prevent you from imbibing a touch too much. 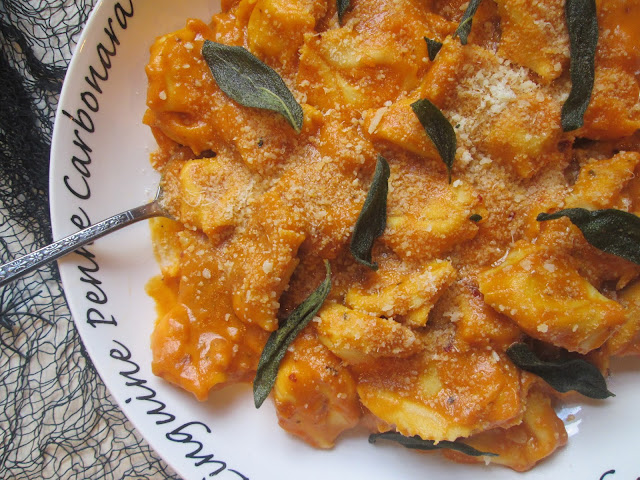 To the skillet, add the olive oil, shallot, garlic, and oregano. Cook until the shallots begin to caramelize, about 5 minutes. Reduce the heat to low, add the tomato paste, pumpkin, and red pepper flakes, cook 4-5 minutes, until thickened. Stir in the vodka, or white wine, cook another 2 minutes. Stir in the cream, 1 tablespoon butter, and the parmesan. Season with salt and pepper. Keep warm over low heat.

Bring a large pot of salted water to a boil. Add the tortellini and cook according to package directions until al dente. Just before draining, remove 1 cup of the pasta cooking water. Drain.

Add the tortellini to the vodka/wine sauce, tossing to coat. If needed, thin the sauce with pasta cooking water.

Divide the tortellini among plates and top with crispy sage and parmesan. Enjoy! 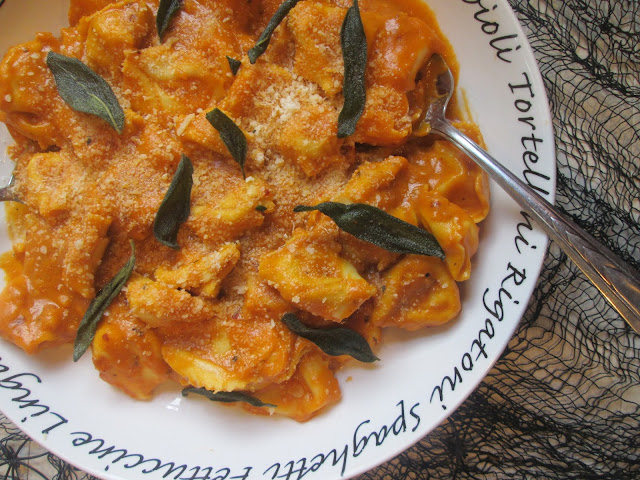 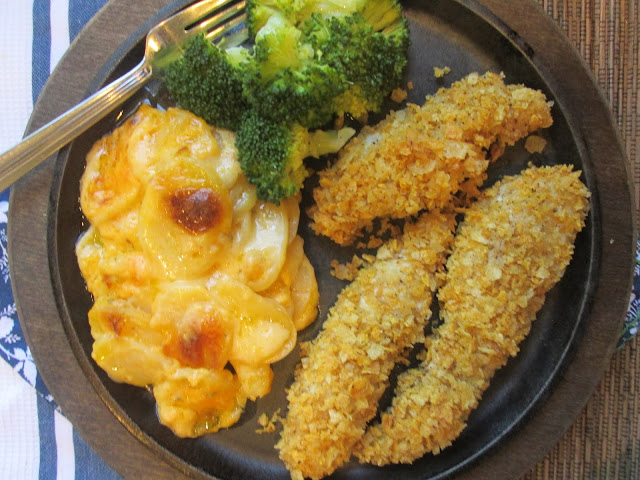 My son and I have been binge watching the latest season of Locke & Key on Netflix. We have literally been waiting years to catch season 2, thanks to the pandemic. Let me just say, if you have older teens, this does not disappoint.

I wanted to make something quick, but also something we could watch while binging episodes. Half-Baked Harvest's Potato Chip Chicken fits the bill. It couldn't be any easier, it's kid-friendly, it's delicious, and it's perfect for dipping and dunking while you watch TV.

All you need to do is dip chicken tenders in melted butter, then coat them in a finely crushed combo of cornflakes and potato chips and bake! I love the idea of using various kinds of chips: tortilla chips, BBQ chips, sour cream n' onion chips...you name it!

We loved these potato chip chicken tenders served with some steamed broccoli and some super cheesy and comforting au gratin potatoes. The potato chips give the chicken a light and flaky crispety-crunchety delicious flavor. They are SO GOOD! This is one of those meals that will go on repeat! 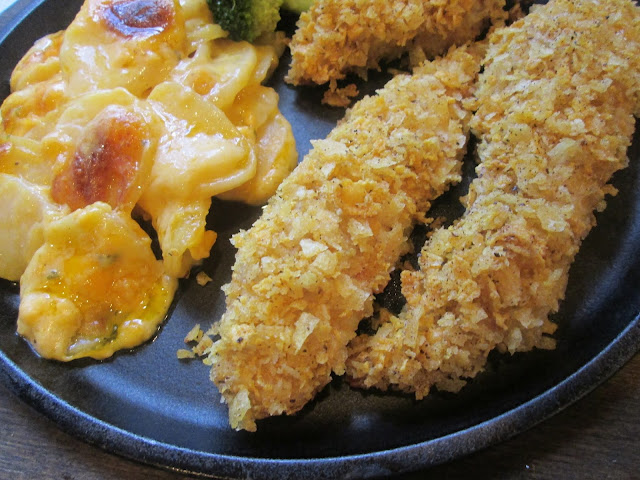 Working with one piece at a time, dip the chicken in the butter, allowing the excess to drip off, then dredge through the potato chip-cornflake crumbs, pressing gently to adhere. Place the coated chicken on a baking sheet as you work. Season with seasoned salt and pepper.

Bake for 25 to 30 minutes, or until the crumbs are golden and the chicken is cooked through. Serve warm. 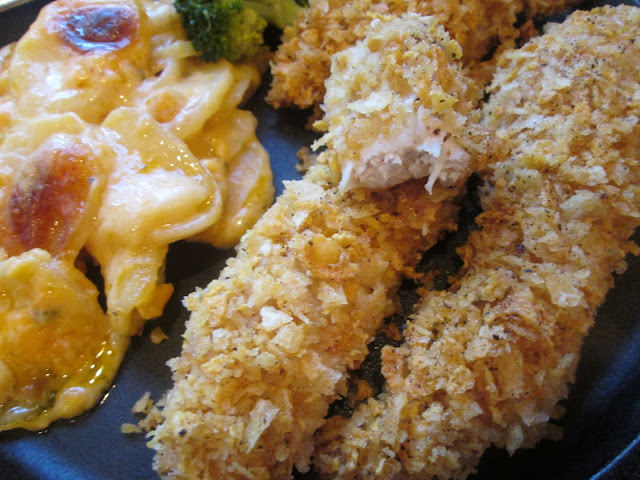 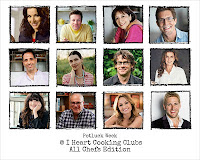 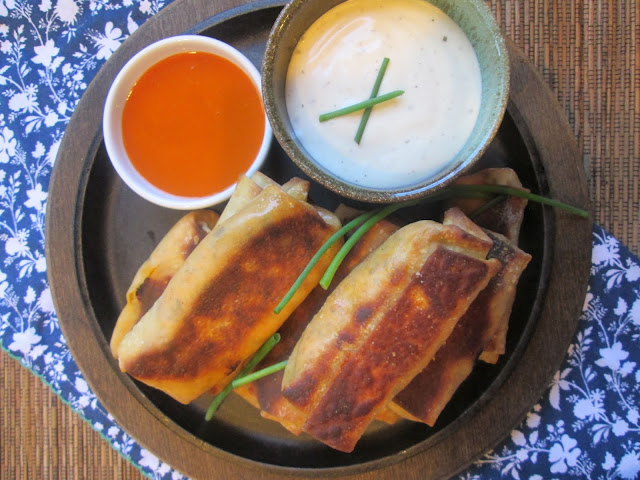 These are the perfect tailgate recipe for football season and guess what, they are really pretty healthy! Tieghan of Half-Baked Harvest packs the buffalo chicken filling with TONS of flavor! It starts with shredded chicken and then she adds buffalo sauce, greek yogurt, and lots and lots of herbs like: chives, dill, onion powder, garlic powder, and parsley. Then there's cheddar cheese and blue cheese. I'm telling you, that filling is like a flavor bomb!

Then you just place some filling in the egg roll wrapper and wrap it up! It's easy peasy. Tieghan bakes her egg rolls, making them much healthier (and every bit as crunchy) as fried egg rolls. These turn out so delicious and flavorful and are great dunked into some more buffalo sauce and/or some ranch.

Best of all, the egg rolls stay hot/warm for a really long time. They are best served straight from the oven while still hot, but they are still delicious when warm or at room temp. We loved them! 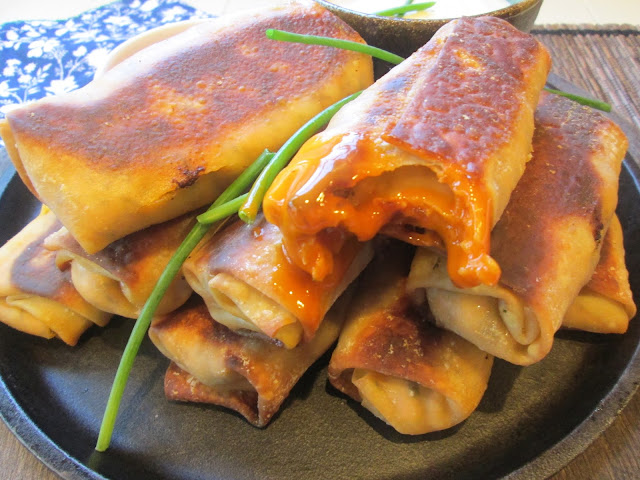 salt and pepper, to taste

In a bowl, combine the chicken, yogurt, buffalo sauce, chives, parsley, dill, onion powder, garlic powder, and a pinch of salt. Stir in the cheeses.

To assemble, spoon 2 tablespoons of filling onto each wrapper. Brush water around the edges of the wrapper, then roll up and place on the baking sheet. Brush each roll lightly with olive oil. Transfer to the oven and bake for 10-12 minutes, then flip and cook another 8-10 minutes more, or until the rolls are crisp.

Serve the egg rolls with fresh herbs, buffalo sauce, and plenty of ranch for dipping. 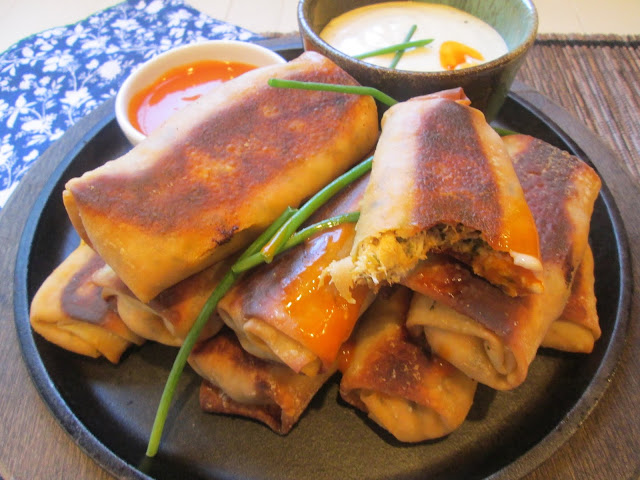 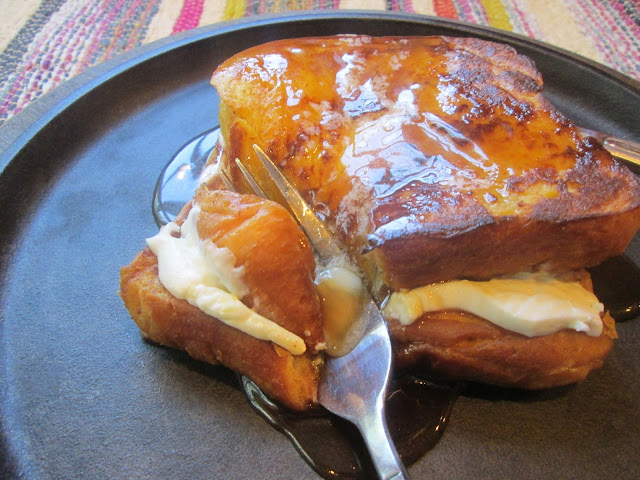 Each and every single time Tieghan Gerard of the Half Baked Harvest fame posts something, I pretty much want to stop everything I'm doing and make that recipe right then and there! I own both of her cookbooks and pretty much stalk her on social media, waiting for the next new recipe.

I am so happy we will be cooking along with Tieghan at I Heart Cooking Clubs for the next six months because it will give me the push I need to cook some of the recipes I've bookmarked over the years. You see, I bought both of Tieghan's cookbooks and I've pinned tons of her recipes on Pinterest, but I haven't really made any. I'm somewhat of a procrastinator like that. I kinda need a deadline.

I fussed and fussed over which recipe to choose to share first. Tieghan loves burrata cheese and I pretty much live for burrata so at first it was going to be something burrata. Then I was going to make one of her festive and amazing fall cocktails, like this "I Put a Spell On You" Poison Apple Martini (....it's the edible gold glitter for me). I was even tempted to make one of her pasta dishes. But then I got around to looking at her breakfast recipes and well, breakfast is my very favorite.

Everything was making me swoon in total delight, but it's October, and I'm nearing the end of my Fall Break from school, so some celebratory breakfast was in order. Pumpkin Spice French Toast with Cider Syrup....yes, the french toast is stuffed with cream cheese. Yes, it is a total splurge. Yes, it is totally knock-you-out delicious and worth every single last bite.

I made my annual fall trip to Trader Joe's a week or so ago and I bought all the fall things, including a can of pumpkin and their brioche bread. I like to keep that brioche in the freezer for the sole purpose of making french toast. Now, I don't know about you, but I keep apple cider stocked in my fridge all fall season. So I had all the things I needed to make this french toast. I guess it was fate.

I started by making the apple cider syrup. I was a little worried it wouldn't cook down to a syrup consistency but it did. It's so good. I wish I would've doubled the recipe. If you make this, go ahead and double the recipe. I definitely will from now on.

Then I mixed up the custard for the french toast: eggs, milk, pumpkin, pumpkin pie spice, cinnamon, vanilla, and salt. Tieghan says that you can cut into your french toast and stuff it with cream cheese prior to dunking in the custard and frying, but I chose to spread the cream cheese (needs to be room temp) on top of one piece of french toast and then sandwich it with a second piece. Either way, you can't go wrong.

THIS PUMPKIN SPICE FRENCH TOAST WITH CIDER SYRUP WAS INCREDIBLE! It had a lot going on: sweet, tangy, creamy, a little salty, and a little crispety-crunch on the edges. I ate both pieces and then I had to have a third piece. I HIGHLY SUGGEST you make this sometime this season! It's a 10! 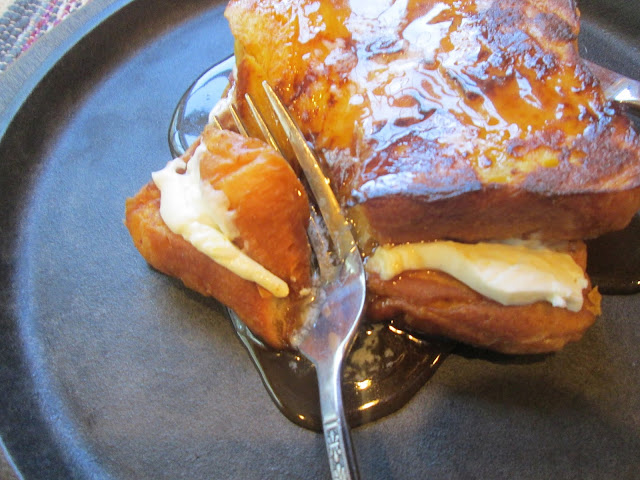 Adapted from Half Baked Harvest

Note: You definitely want to double the cider syrup recipe! It is so good! Also, you can cut into your french toast and stuff it with cream cheese, but that is a lot harder than simply spreading it onto one cooked piece of french toast and topping with another. I do it using the later method because I like easy!

In a shallow, medium size bowl, whisk together the eggs, pumpkin, milk, vanilla, pumpkin pie spice, cinnamon, and salt until combined. Dip the stuffed bread into the egg mixture, allowing each side to sit for 1-2 minutes in the egg mixture. The bread can sit in the egg mix up to overnight, if desired (this overnight stuff never works well for me).

When ready to cook, heat a large skillet over medium heat and coat with butter. When the skillet is hot, cook the bread in batches (do not overcrowd) until golden and crisp, 3 to 4 minutes per side. Remove and serve immediately drizzled with the cider syrup.

Cider Syrup: Add the maple syrup and apple cider to a medium size sauce pot. Bring to a boil over high heat. Simmer for 10-15 minutes or until the mixture has reduced by half and is syrupy. Remove from the heat and stir in the butter. Keep warm until ready to serve or store in a glass jar and warm over the stove before serving with the french toast. 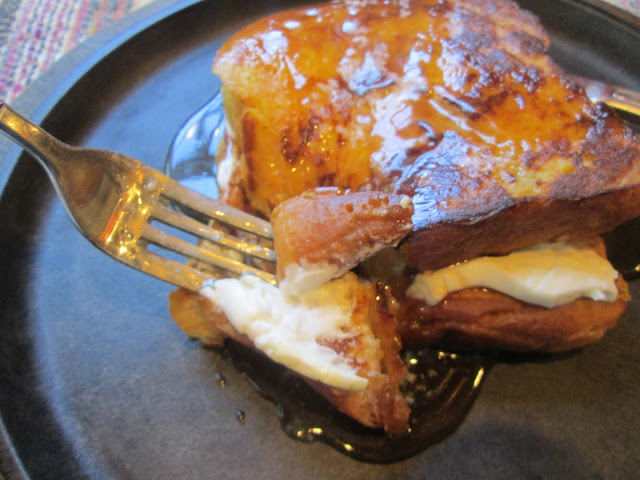 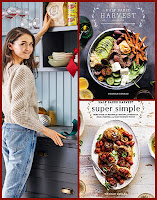