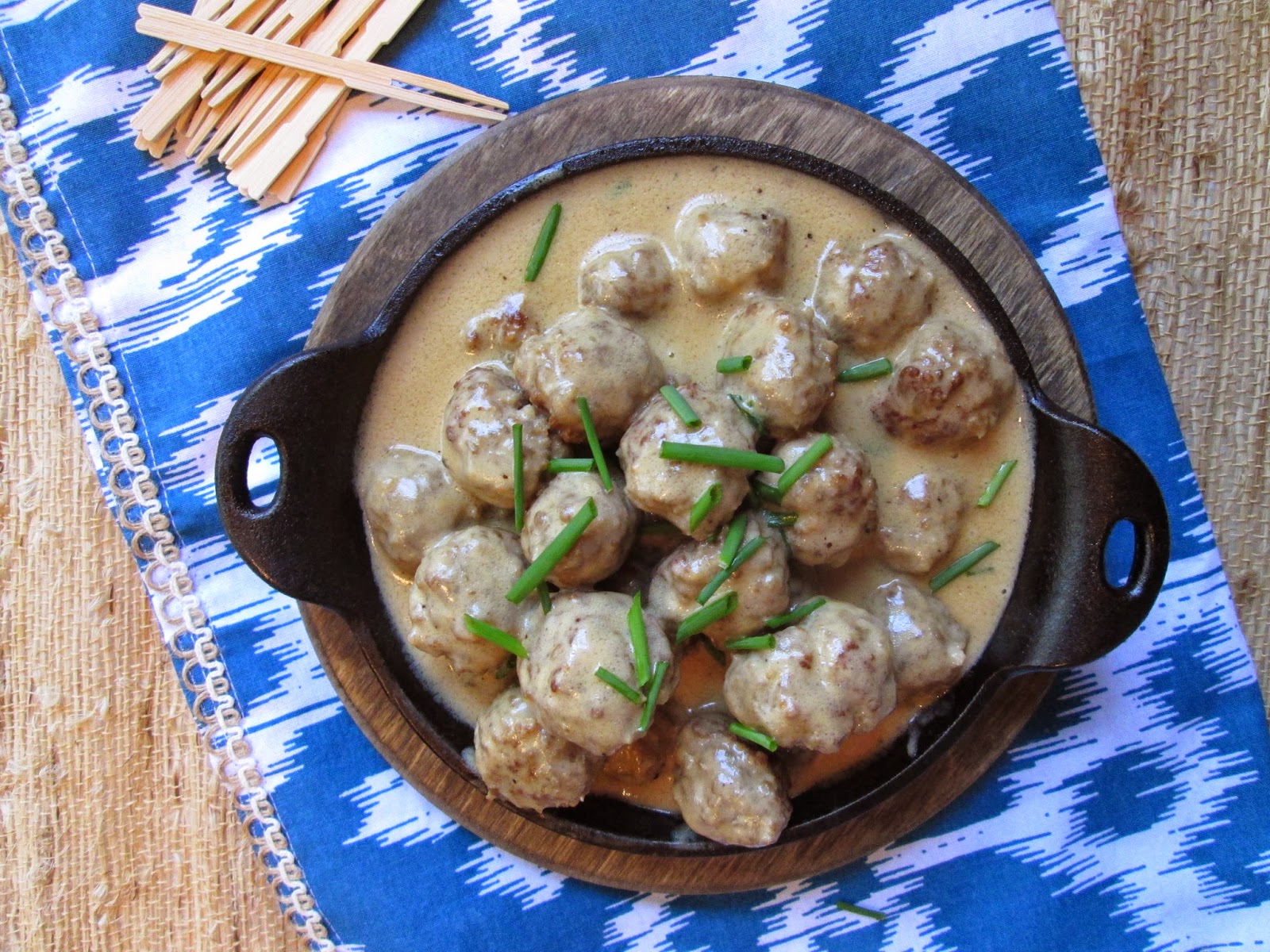 Flavorful sausage balls swimming in a creamy sauce that hints of mustard.  Top it all with a scattering of chopped chives and you'll want to grab a skewer and shove one in your mouth quicker than you can say delicious.

I served these sausage balls in a heated cast iron serving dish as an appetizer.  I've also served them over egg noodles as a main course.  I can't decide which I like better.  It's hard to beat a meatball as an appetizer and anything over pasta is always a hit so either way is a win as far as I'm concerned. 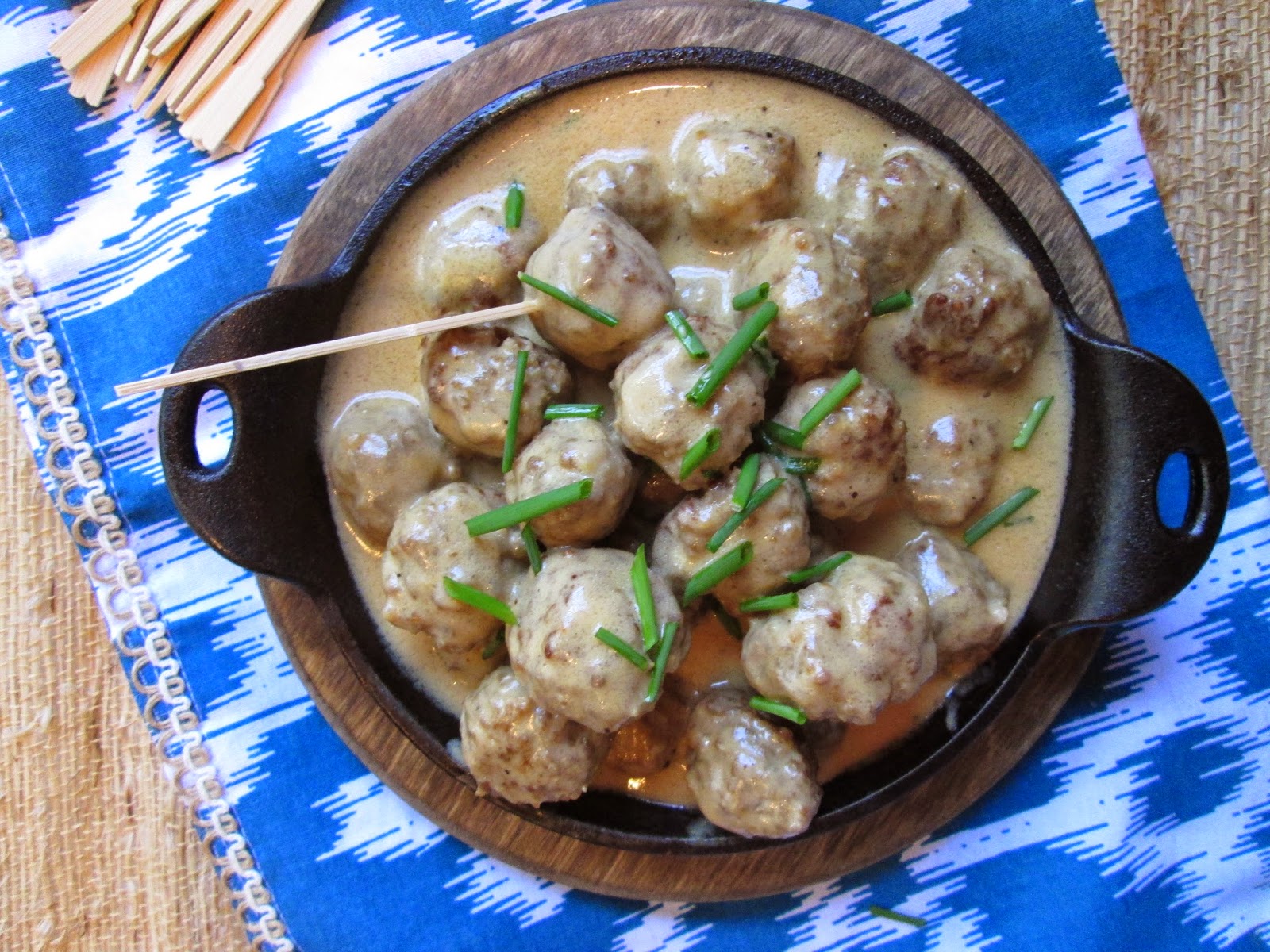 The recipe
Remove the skins from 1 pound of really good-quality butcher's sausages. Roll the sausage meat into about 24 balls, slightly smaller than a golf ball. Warm a nonstick frying pan over a moderate heat and cook the balls until they color, turn them over and continue cooking until they are evenly browned. Tip away any excess fat and pour in 2 cups of beef stock. Bring to the boil, allow to reduce a little then pour in one cup of double cream and stir in a tablespoon of Dijon mustard. Season with salt and pepper and continue cooking for 15-20 minutes. Remove the balls to warm dishes, turn the heat up under the sauce – there will be lots of it – and let it reduce a little. It will not thicken. Pour the sauce over the meat balls and serve with a fork and a spoon for the sauce. A few snipped chives can be added if you wish.
The Trick
Get a good sausage. Perhaps something with plenty of parsley and pepper in it. To peel them, slit the skin from one end to the other with a knife, pull the skin apart and squeeze the filling out into a bowl. Beef up the seasoning a bit if you like, with some chopped thyme, crushed garlic, black pepper or grated parmesan. Use a good-quality stock.

The Twist
Add chopped dill to the meatballs and sauce. Use crème fraîche instead of cream. For a less-rich dish, leave out the cream. For a milder version use chicken stock instead of beef. Serve with wide ribbon noodles, such as pappardelle. Instead of using shop-bought sausage meat, season plain sausage meat as you wish. Try juniper, thyme, garlic, cumin or ground cardamom. 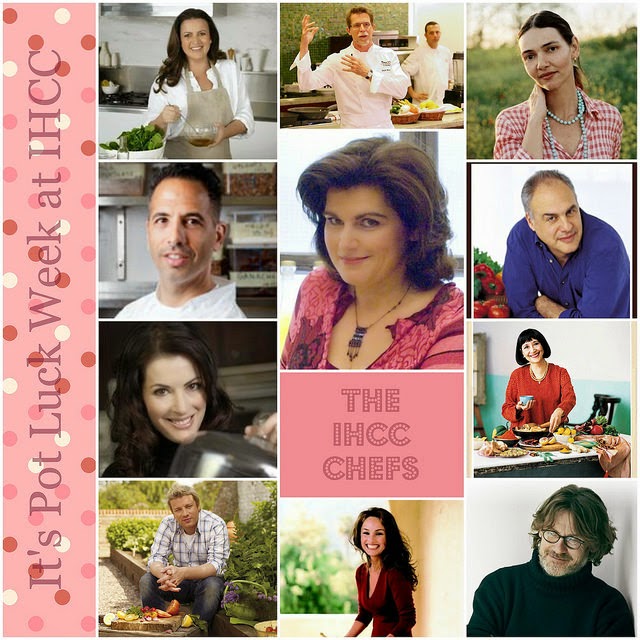 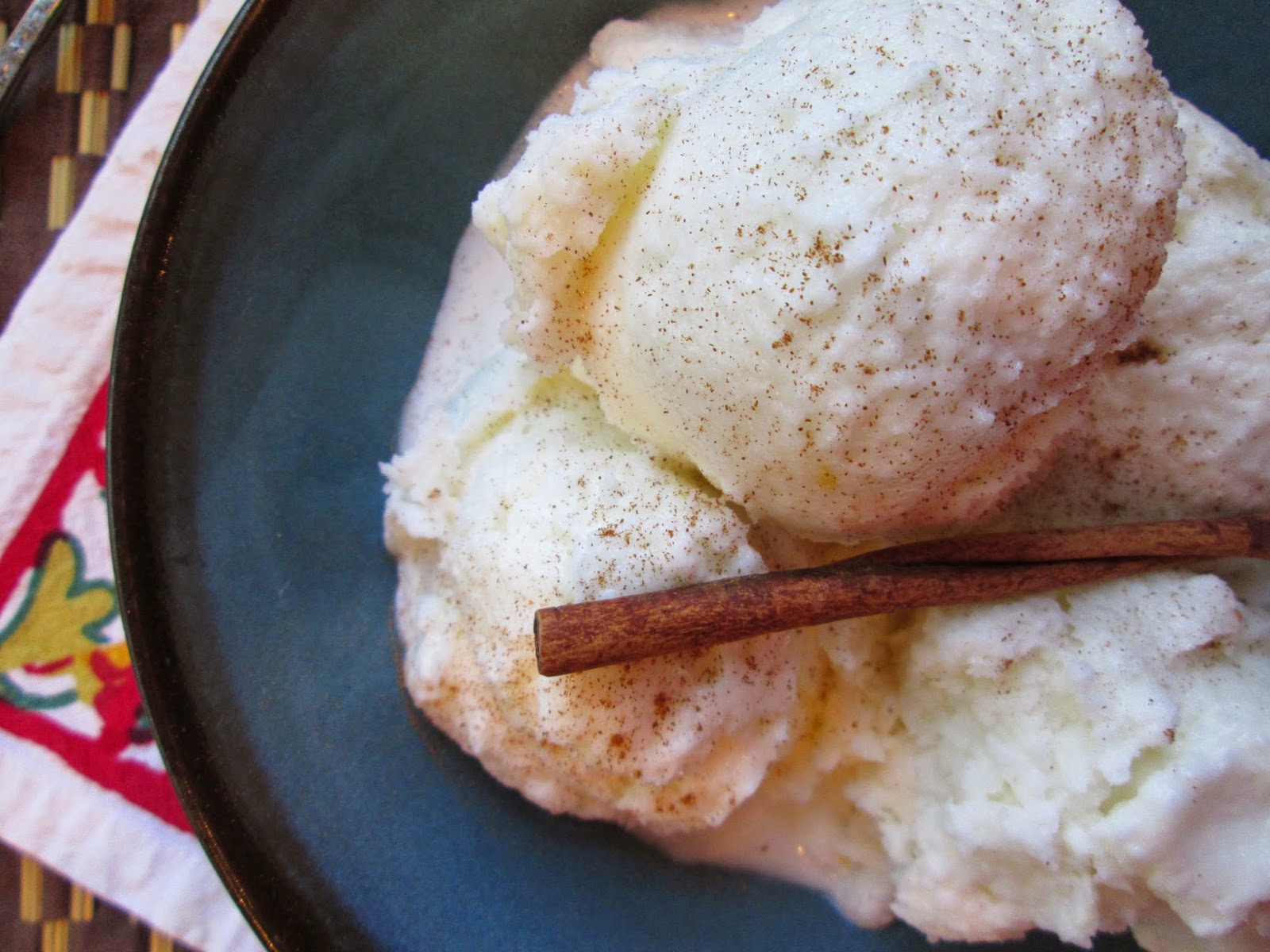 Leche Merengada actually means "meringued milk" and that's actually all it is.  An icy cold treat that is an easy blend of egg whites, milk, and cream. In this recipe for Leche Merengada a cinnamon stick is added to provide a lovely hint of cinnamon flavor.  The addition of cinnamon makes this ice cream the perfect pairing for just about any fall dessert, such as apple pie.  Best of all, this is a simple mixture of ingredients.  You do not need to fuss with making a custard.  You don't even need to own an ice cream machine.  Simple and fuss-free.  Just the way I like it. 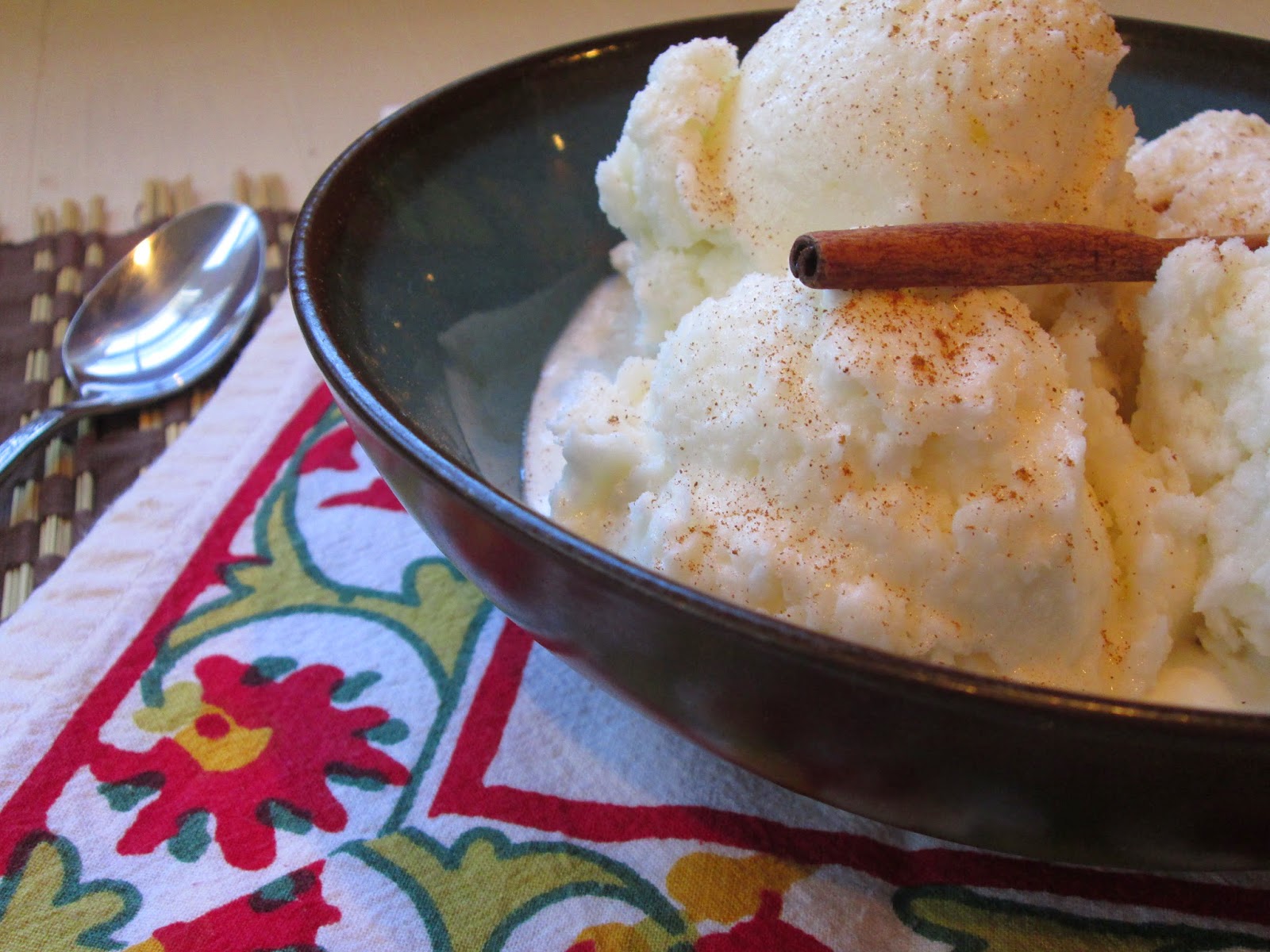 Put the milk, cream, 3-1/2oz of the sugar, the lemon zest, and cinnamon stick into a saucepan.  Bring to just under the boil.  Remove from the heat and let the mixture infuse for about 40 minutes.  Strain the mixture through a sieve and add the brandy.

Whisk the egg whites with the remaining sugar until stiff.  (Note: I had quite a bit of trouble getting my egg white and sugar mixture to become stiff.  I added a dash or two of cream of tartar and this seemed to do the trick). Fold this into the cream and milk mixture - it will seem impossible to incorporate, but don't worry; it will all get beaten together during the freezing process.  Either still-freeze, beating the mixture from time to time with a hand whisk, or churn in an ice cream machine.  Sprinkle with cinnamon before serving. 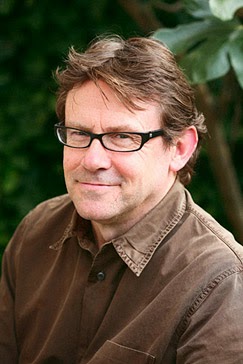 Over at I Heart Cooking Clubs  we have been cooking and celebrating the recipes of Nigel Slater for the past six months.  This is our very last week cooking with Nigel and I always like to end my six month run with a favorites roundup.

I can honestly say spending time in the kitchen with Nigel was a very pleasant adventure.  His recipes were simple, no-fuss, and very family friendly.  Everything we tried was delicious.  However, I ran across a few favorites that I have turned to again and again.  These were the recipes that were repeated in my kitchen over and over and have since become favorites. 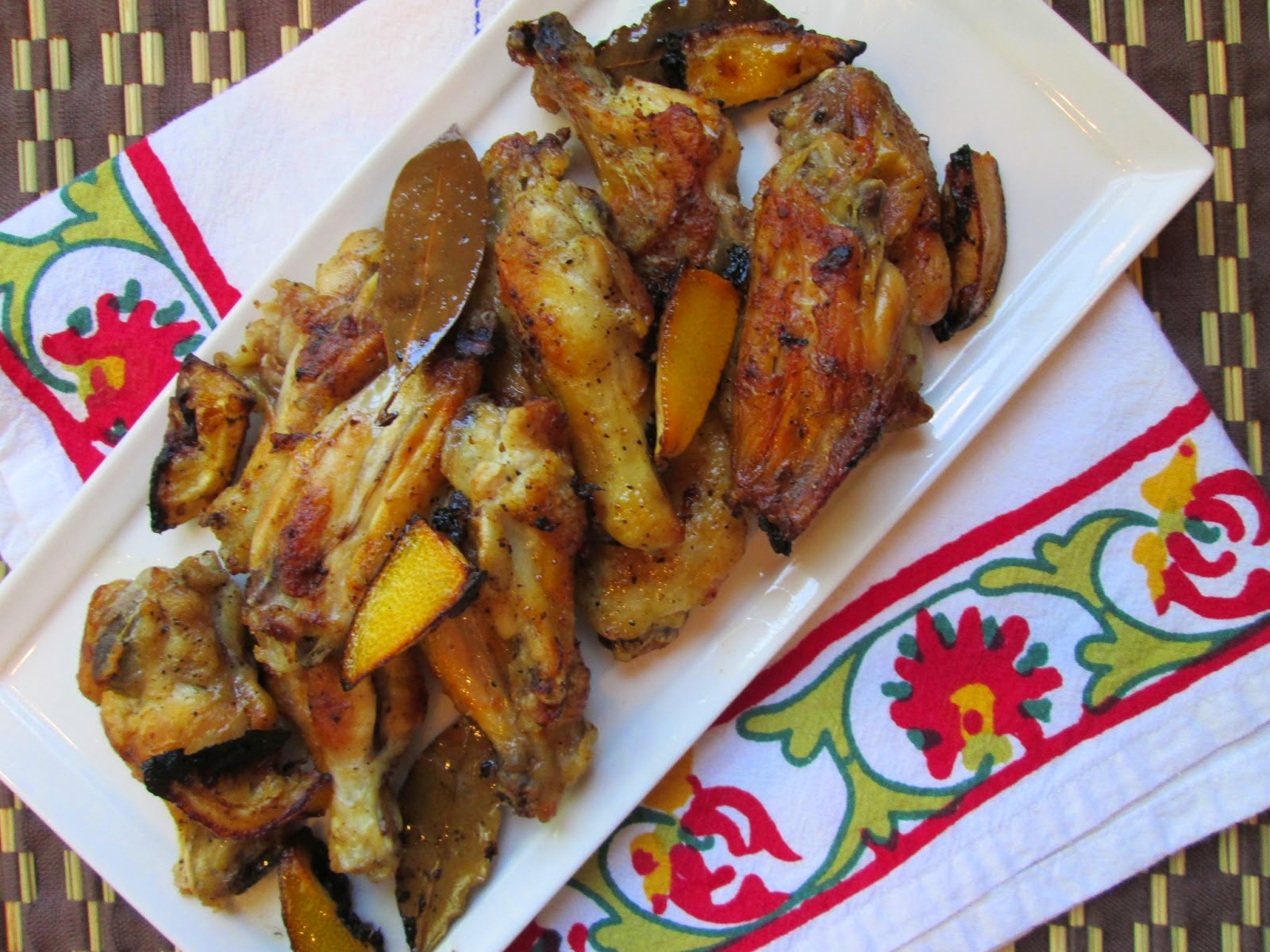 Nigel's Roast Chicken Wings are so unbelievably delicious.  After spending some time in the oven the chicken wings become very crispy, sticky, and coated with flavor.  I actually prefer these wings to the deep fried version.  We have made these wings several times now and each time we change the flavor profile a little. We've tried them plain with salt and pepper, lemon and pepper, with a buffalo dry rub, and with Lawry's seasoning.  Delicious each and every time. 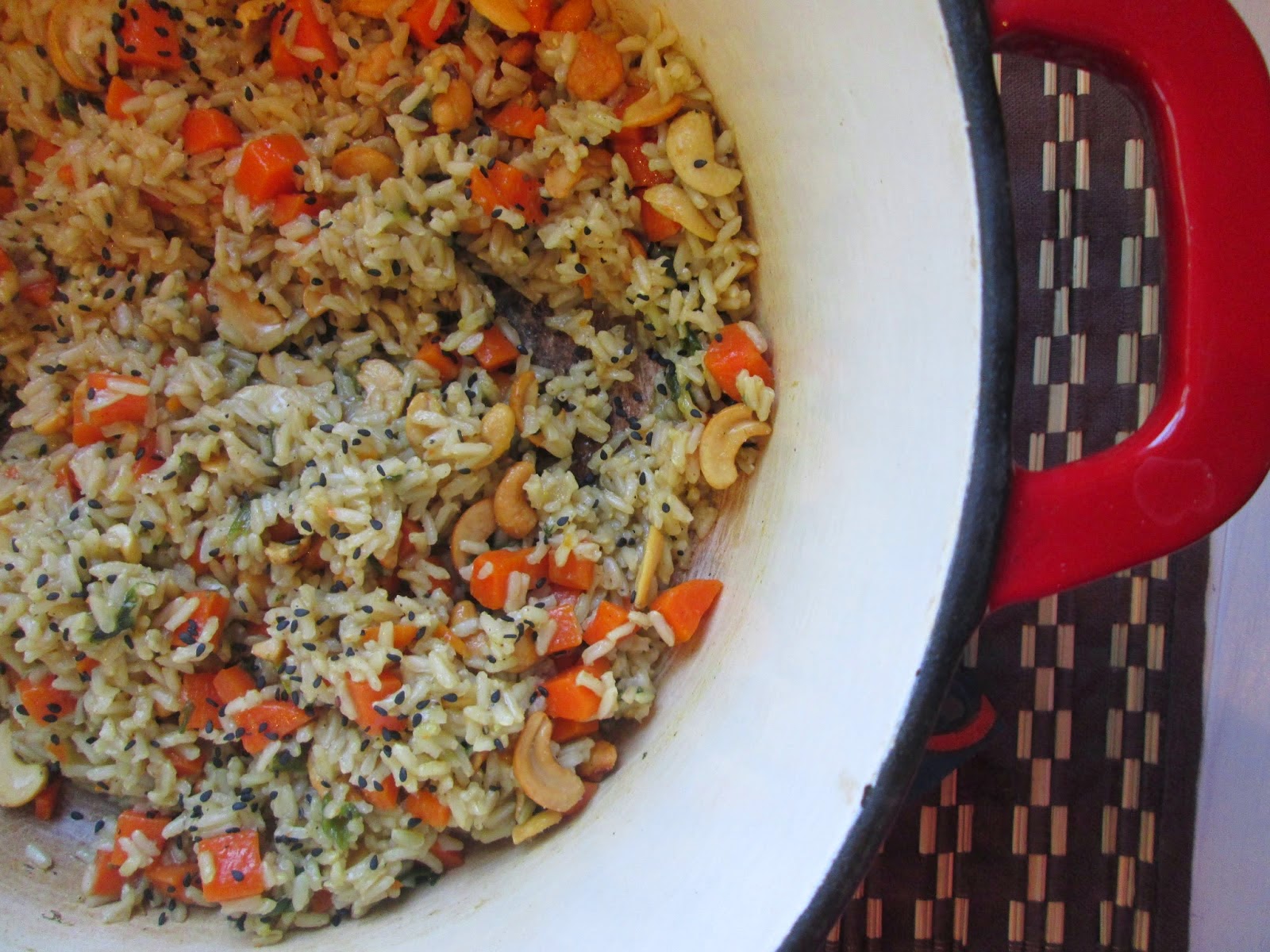 Nigel's Brown Rice, Carrot and Cashew Pilau looks like a really simple dish.  At first glance it might not really get your attention.  I'm here to tell you that it is an incredible rice dish!  I love the chewy texture of the brown rice, the sweetness of the carrots, and the crunch from the cashews.  I've made this rice dish nearly every week since.  It can be served as a side dish, but with a little broccoli or shredded chicken mixed in it is substantial enough for a main dish. 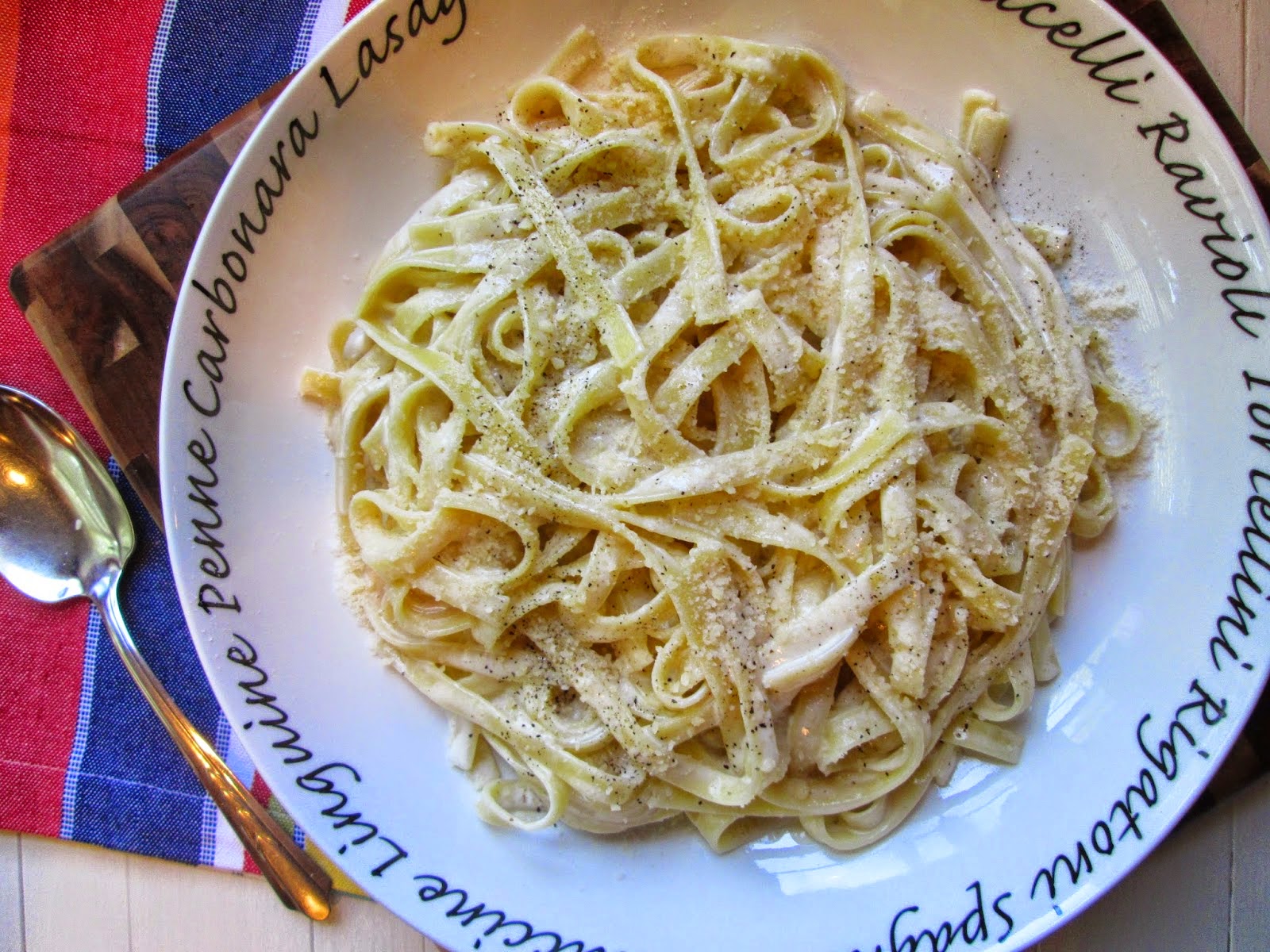 My daughter, who is a total pasta fanatic, loves Fettucine Alfredo.  Lucky for her this is a good thing because she actually needs to gain weight.  I've made different versions of Fettucine Alfredo in the past and they can be tricky and never really seem to turn out well.  This version of Fettucine Alfredo is the easiest I've tried and it's also the best I've tried.  Major Score!  Five simple ingredients and you are all set for an indulgent and comforting pasta dish.  Odds are you have everything you need to make this on hand.  I highly recommend this dish! 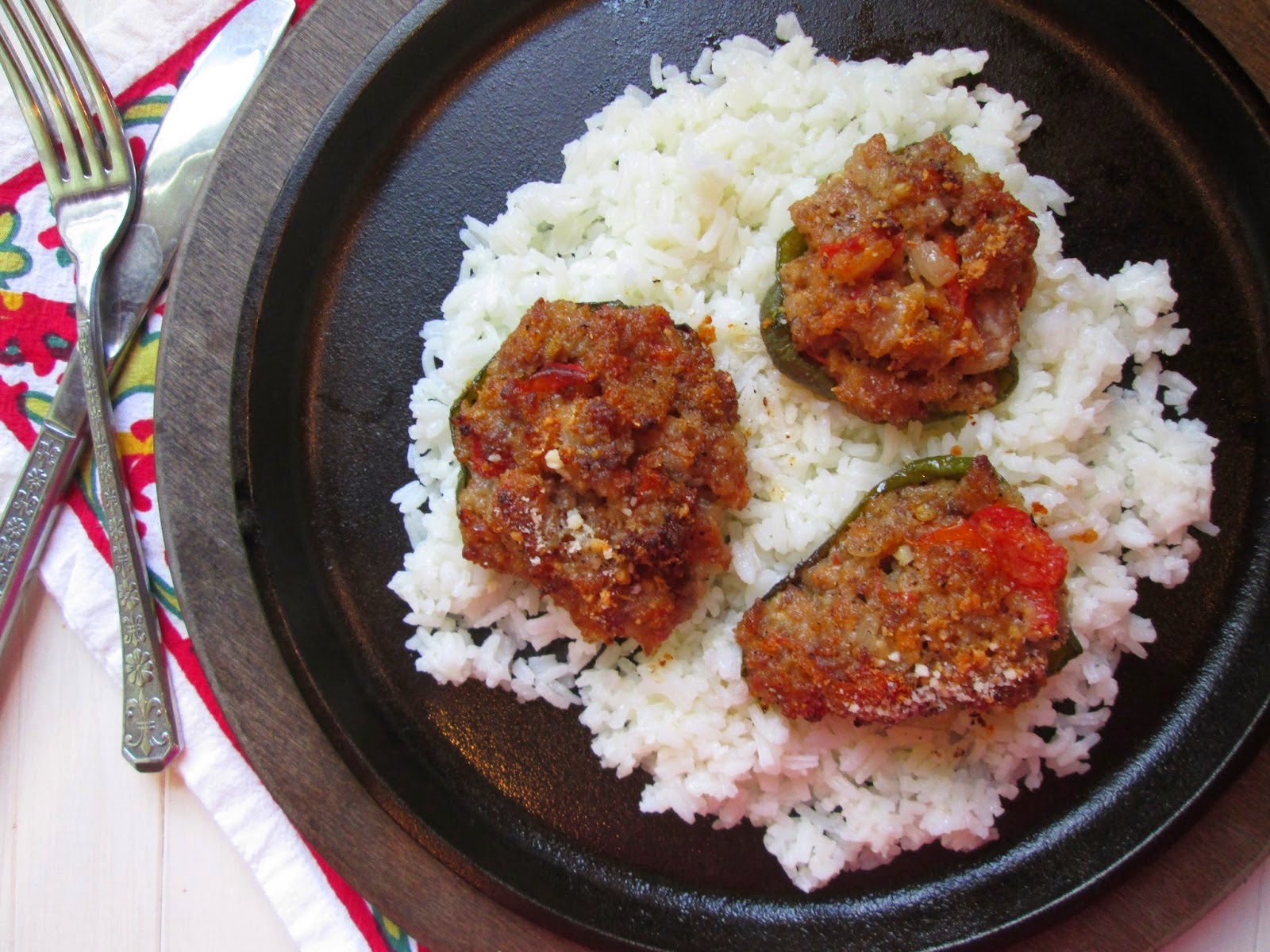 Stuffed peppers are a real favorite in my house so I may be a bit biased when it comes to them.  Saying that, these Peppers Stuffed with Pork were some of our favorite stuffed peppers ever!  Of course, I should take this time to say that pork is probably our meat of choice so again there may be a bit of bias going on.  These were so addictive and hard to stop eating. They went quickly.  Too quickly. 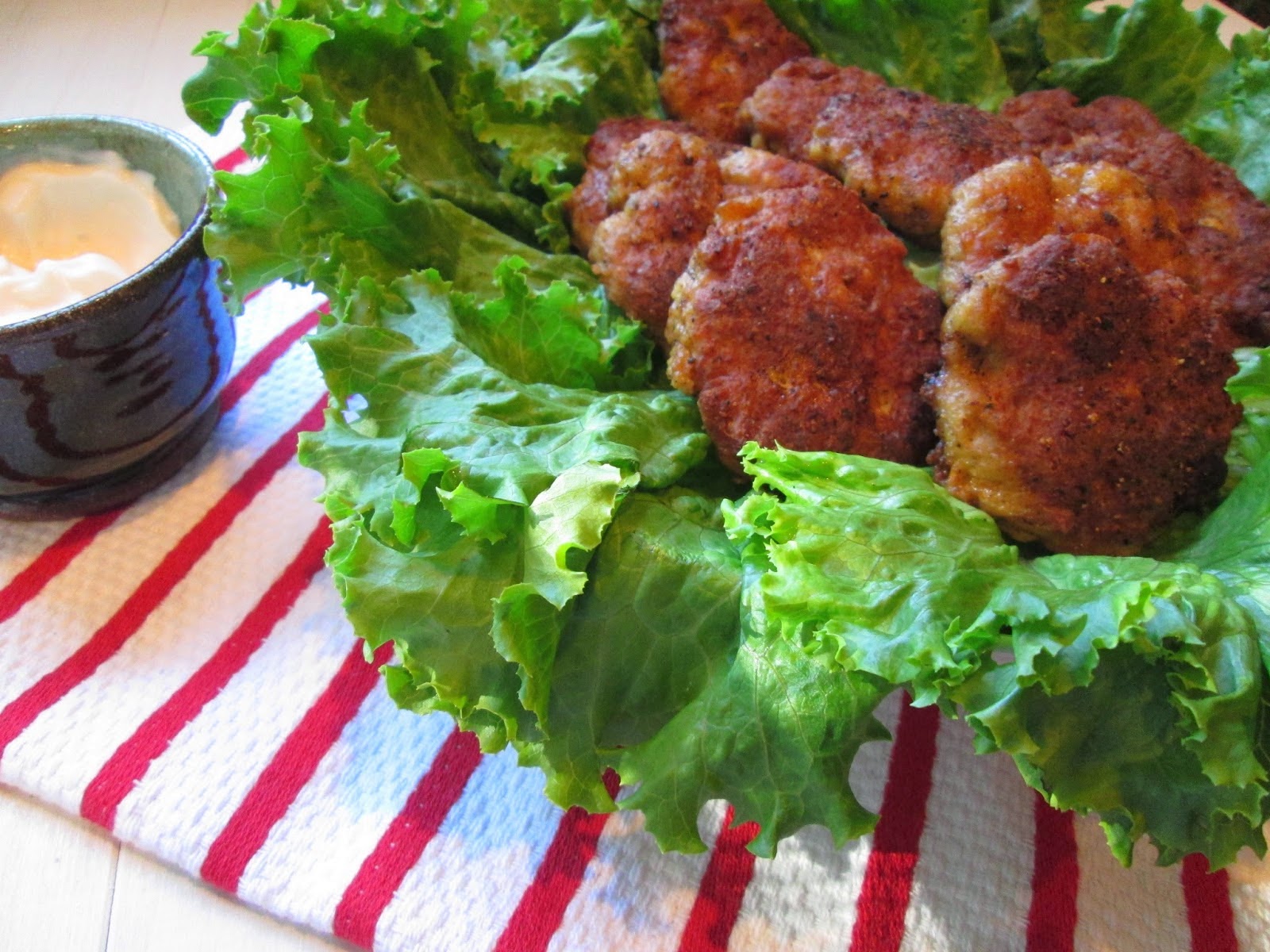 Chicken Cakes with Lettuce and Mayo

I'm ending my roundup with these Chicken Cakes with Lettuce and Mayo.  There's shredded chicken, bacon, and cheese and it's fried in bacon fat.  Enough said, right?  Pretty much speaks for itself. 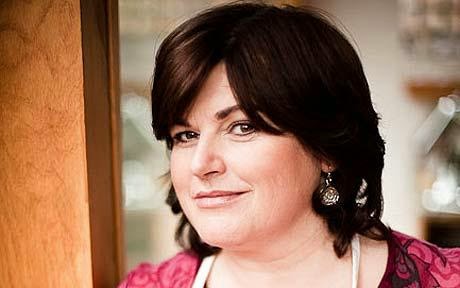 Next week we will begin cooking the recipes of Diana Henry.  Diana Henry has written seven cookbooks and writes a column for The Telegraph.  She has a plethora of recipes to chose from and it is going to be a very fun six months.  If you'd like information on joining us, head over to the I Heart Cooking Clubs Welcome page.