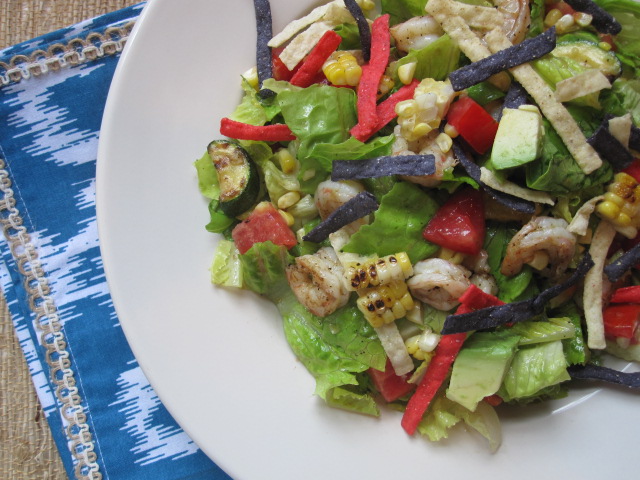 Sometimes I've just gotta keep it real, so here goes.  I've been wanting to make this salad ever since I received my copy of Weeknights with Giada, which was over a year ago. In fact, it was the number one recipe I wanted to make after paging through the book.  Any reasonable person would have went out, bought the ingredients, and made the salad. What did I do?  I stared at the recipe in the book and thought about all the washing, chopping, grilling, whisking, and tossing.  Then I just flipped the page to something easier and more convenient.  For an entire year!

Last week I was flipping through the book again and this recipe was staring me right in the face.  I decided it was time to make the salad.  I bought the ingredients with the intention to make the salad for dinner that night.  Truth: it took me three days to psych myself up and make the salad! I may just be the Queen of Procrastination!

I had to force myself to get started on the salad, but I'm so glad I did!  This salad is bursting with bright fresh flavor and hits all the notes that a good salad should.  You get the crispness form the lettuce and tortilla strips, the creaminess of the avocado, the smokiness from the grilled corn and zucchini, tender bites of sweet grilled shrimp, and the fresh flavor of juicy summer-ripe tomatoes.  This colorful salad gets tossed in a zingy and refreshing lemon vinaigrette that quite simply brings all the flavors to life.

I might just have it in me to make another one. 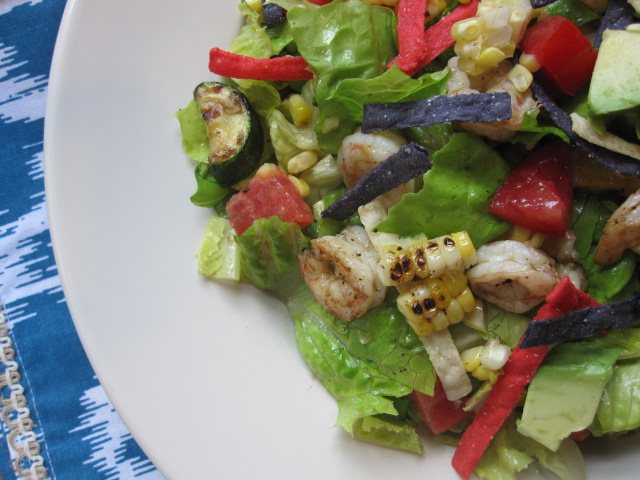 Drizzle the corn, zucchini, and shrimp with olive oil.  Season with salt and pepper to taste.  Grill the corn and zucchini for 2 minutes on all sides until crisp-tender.  Grill the shrimp for 2 to 3 minutes on each side, until the shrimp is opaque and cooked through.

In a small bowl, whisk together the lemon juice, extra virgin olive oil, agave nectar, minced/grated garlic, and salt and pepper to taste.  Whisk until smooth.

Pour the dressing over the salad (use discretion as you may not need to use it all) and toss until all the ingredients are coated.  Season to taste with salt and pepper.  Garnish with tortilla strips and serve. 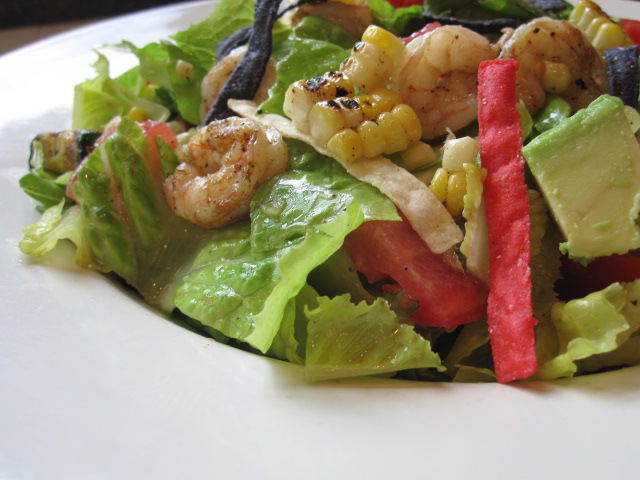 Tahini is a paste made from sesame seeds that is used in both sweet and savory dishes.  Tahini smells very similar to peanut butter so when I saw this recipe for tahini cookies in Yotam Ottolenghi's cookbook, Jerusalem, I knew I'd have to try them.


I would describe these cookies as a cross between a shortbread cookie and a peanut butter cookie.  They certainly have the texture of a shortbread cookie, but the mild flavor of a peanut butter cookie.  I enjoyed these cookies because they weren't too sweet and had a pleasant mild flavor.  I would have preferred just a touch more tahini because the flavor was quite subtle, but otherwise I really enjoyed these.  Definitely a fun cookie to make if you have extra tahini on hand! 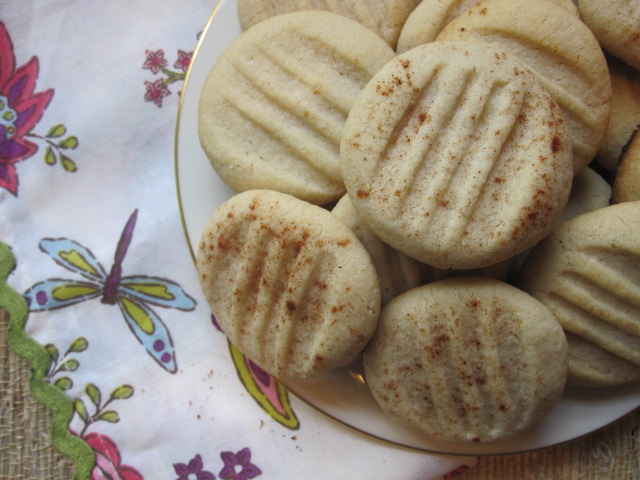 
Note: These cookies do benefit from a sprinkling of sugar or cinnamon/sugar prior to baking.

Preheat the oven to 400F.  Place the sugar and butter in a stand mixer fitted with the beater attachment and beat on medium speed for 1 minute, until just combined but no aerated much. With the machine running, add the tahini, vanilla, and cream, then add the flour and beat for about 1 minute, until the dough comes together.  Transfer to a work surface and knead until smooth.

Pinch off 2/3 oz/20g of the dough and roll into a ball between your palms.  Use the back of a fork to push down lightly on top of the ball so that it flattens just slightly and takes on the marks from the tines.  Place on a baking sheet lined with parchment paper.  Continue with the rest of the dough, spacing the cookies 1-1/4 inches apart.  Sprinkle a little cinnamon and/or sugar, or both, on each cookie and then bake for about 10 minutes, or until golden (you have to watch them closely as the bottoms will brown very quickly).  Transfer to a wire rack to cool before serving.  They will keep in a sealed container for up to 10 days. 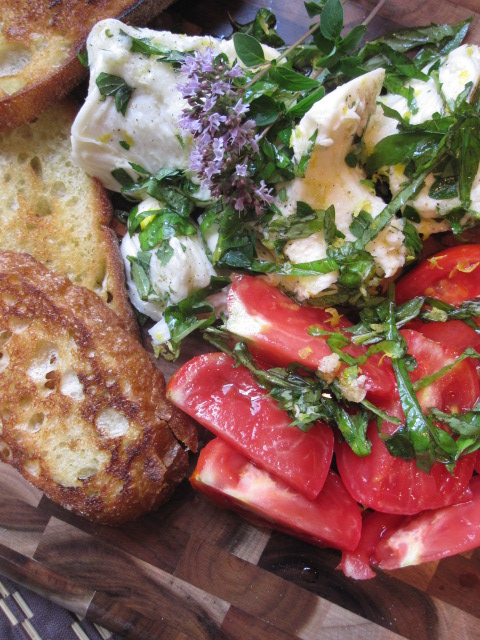 Last week my kids went back to school.  My daughter was really psyched for her first day of seventh grade at the middle school.  My son was really excited for his first day of first grade.  I was super prepped, really organized (for the first time ever), and fairly confident that all would go well.  Everyone really had a positive attitude and all was good.  Then the first day of school came and it was pretty much a nightmare.

Turns out my son's first grade teacher isn't real good at anything, especially when it comes to following safety and health guidelines.  For those of you that don't know, my son has severe food allergies and certain procedures are supposed to be followed at school. To sum things up, the teacher followed none of the procedures or rules.  In fact, she violated every single one and then some.  It made for a very frustrating and worrisome week.  It was also quite surprising because I've always felt like child safety is one of the strong suits at this particular elementary school.  I ended up having my first trip to the principal's office, but I think the issues are finely under control.  I certainly hope so, anyway.

Prior to all the problems, I had hoped to enjoy lots of time in my kitchen while the kids were in school.  However, all the issues caused so much concern I barely had time to slice a tomato and make a quick marinade.  Lucky for me, that's pretty much all that was needed for a fresh and flavorful light meal.

This recipe was definitely a bright spot in my week.  I was able to pick the tomatoes and herbs right from my own backyard.  Making this dish was somewhat therapeutic for me.  There's no way you can look at all those bright colors and fresh flavors and not be happy.  I served the marinated mozzarella and fresh tomatoes over some good crusty bread.  It was crazy delicious!  I'd definitely recommend taking advantage of the fresh summer tomatoes and herbs right now.  Choose this recipe, or a similar recipe, and you will absolutely brighten your day! 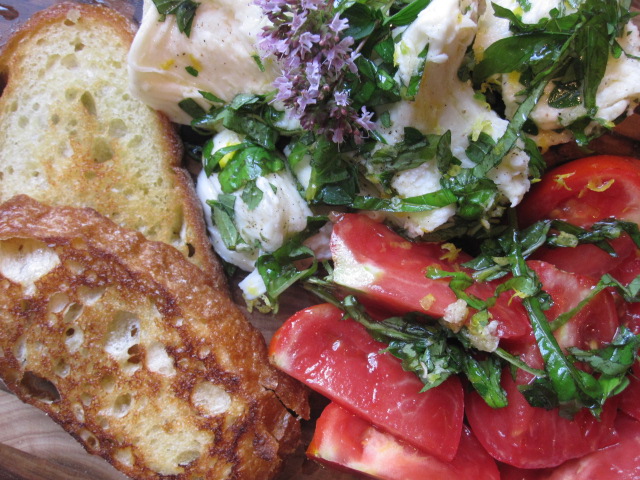 To make the marinade: Add the marinade ingredients to a small bowl.  Mix thoroughly.  Break the mozzarella roughly with your hands.  Smear it with the marinade and set aside for 15 - 30 minutes.

To serve, cut the tomatoes into wedges and plate along with the marinated mozzarella.  Drizzle with extra olive oil.  Serve with good crusty bread. 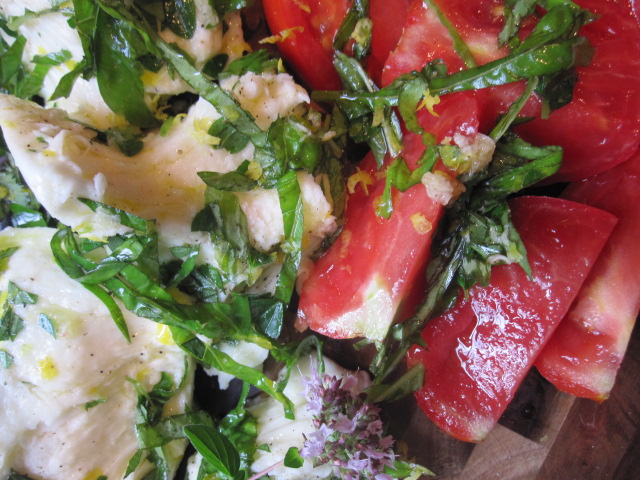 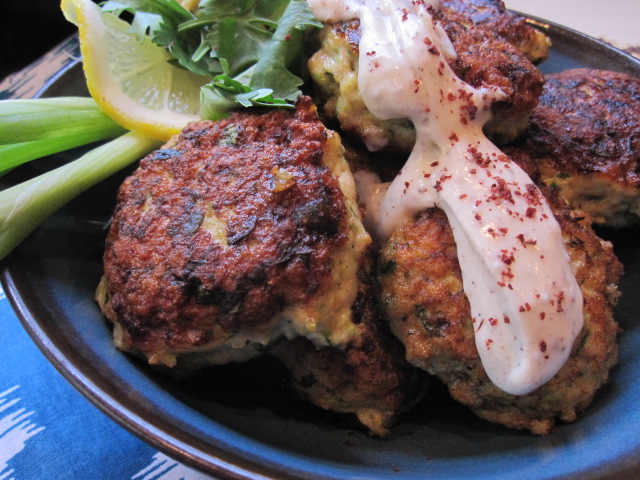 These Mini Turkey and Zucchini Burgers are exploding with flavor (zucchini, green onions, mint, cilantro, garlic, cumin and cayenne).  In addition to their wonderful flavor, these burgers are also incredibly moist.  In fact, the mixture was so moist I had to add breadcrumbs in order to shape the patties.

These burgers are tasty all on their own, but they are absolutely addictive when paired with this refreshing and creamy sumac dipping sauce.  For those of you who have not tried sumac, it is a bright red spice that is popular in Middle Eastern cooking.  Sumac is usually described as sour, but I don't feel like that's a positive or accurate description.  I would describe sumac as a colorful, bright, and refreshing spice that is reminiscent of citrus.  I'm crazy for the bright red color and the special zip it adds to dishes. 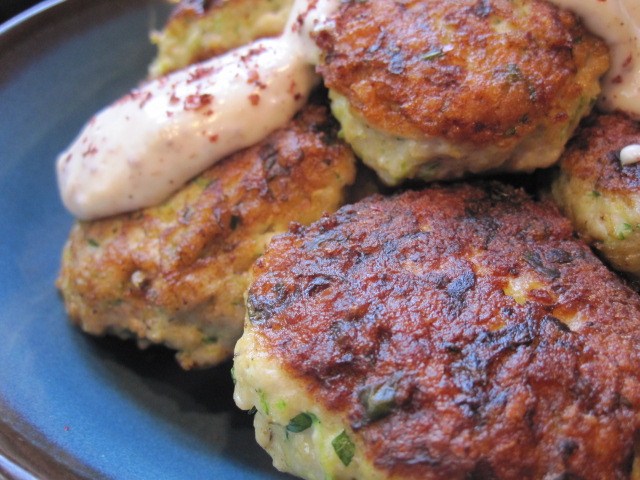 Note: This recipe was originally written to include a scant 1/2 cup sour cream plus a scant 2/3 cup Greek yogurt.  If you'd prefer this option then simply omit the mayo in the above recipe and replace it with the sour cream and Greek yogurt.  All other ingredients remain the same.

First make the creamy sumac sauce by placing all the ingredients in a small bowl.  Stir well and set aside or chill until needed.

Preheat the oven to 425F.  In a large bowl, combine all the ingredients for the burgers except the canola oil.  Mix with your hands and then shape into about 18 patties/burgers, each weighing about 1-1/2 ounces.

Pour enough canola oil into a large frying pan to form a layer about 1/16 inch on the pan bottom.  Heat over medium heat until hot, then sear the burgers in batches on all sides.  Cook each batch for about 4 minutes, adding oil as needed, until golden brown.

Carefully transfer the seared burgers to a baking sheet or cast iron skillet, as I've done here, and place in the oven for 5-7 minutes, or until just cooked through.  Serve warm or at room temperature, with the sauce spooned over on the side. 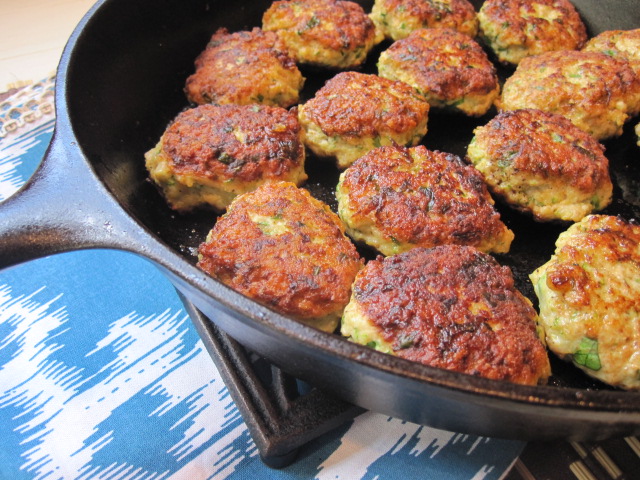