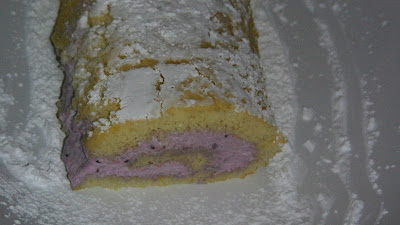 I have been trying blackberry desserts lately in favor of my Mom. She loves desserts containing lime, lemon and blackberries. I found this recipe in Martha Stewart's Baking Handbook and it is not online. It is a basic recipe for a sponge cake that is baked in a 17 x 12 inch rimmed baking sheet for about 10 minutes and then immediately laid out on a powdered sugar covered kitchen towel. Once the cake cools it is filled with a creamy blackberry filling. The cake is then rolled back up and coated with more powdered sugar.

The filling was the easiest part of this recipe. It is simply 1 pint of blackberries smashed with a fork. I strained my smashed blackberry mixture to remove most of the seeds (Martha does not call for straining). Beat 1 cup of cream with 3 tbsp. powdered sugar and fold into blackberries. This is a lovely light purple color and delicious on its own.

The cake batter was a little frustrating make. For the first time, I didn't feel like the recipe was written clear enough. There was one list of ingredients and several steps and I ended up adding sugar to wrong mixture. There was an egg yolk mixture, an egg white mixture, and a dry mix that is folded together and baked. In the end, the cake turned out to be a dream to work with as far as rolling is concerned.

This is a huge cake that would easily serve 12-18 people. I cut the cake in half and took half to my mother-in-law and half to my mom. Everyone really enjoyed the light and airy aspect of this cake. They said it had a melt-in-your-mouth quality. My husband also enjoyed it and he doesn't even like blackberries. I didn't really know what to think of it. I realize that it is a "sponge cake" but it was very spongelike. It seemed like the cake was lacking flavor and was rather light and mild. Maybe this is someone's idea of a fabulous dessert, but I want my desserts to be sinful, rich, and decadent : ) I don't know if I would make this one again.
Posted by Kim at 1:01 PM