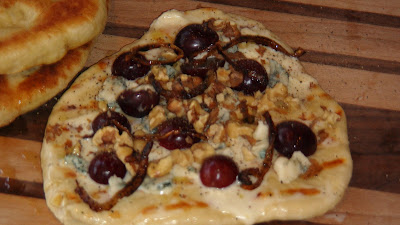 First of all, ignore the way the caramelized onions look in the picture. After I took the picture I ate the flat bread and then realized the onions look like worms! Not so appetizing. On to the recipe. Naturally I could not find flatbreads to make this recipe, so I had to make my own. This is not a bad thing because I am part of a group called BYOB (Bake your own breads). The flatbread recipe will be in my next post and I encourage anyone to make them. They are delicious and you cook them in a skillet so there is no long baking times.

In Tyler's description he says that this recipe is a truly unique flavor profile. I have to admit that I was skeptical to try this recipe and wanted to try it out for myself first just in case. The first few bites were a little strange, but the more I ate of it the more addicted to it I became. I ate the whole flatbread! This dish is hard to explain, but my flatbread was warm and soft like a pillow. It had the shape and shape of a pita bread, but the taste of a pizza dough. There were so many tastes and textures in this one because you have soft from the bread, creamy from the cheese, crunchy from the grapes and walnuts. The dish is sweet, nutty, tangy, cheesey and a little smoky from the grill. This is a must try and would be an easy dish for spring or summer. Tyler's flatbread was one large flatbread that would serve up to 6 people. I think this would make a good appetizer because it would be something unique that people would talk about. I'll stop babbling now, here is the recipe:

In a large saute pan heat a 2 count of olive oil over medium-heat. Add onions and slowly caramelize until brown and creamy. Set aside.

Preheat the grill to high. Quickly and carefully wipe the grate with oiled paper towels to create a nonstick surface. Brush the flat bread with oil and season with salt and pepper. Reduce grill heat to medium. Grill bread on both sides until warmed through and brown with grill marks.

Quickly transfer flat bread to a platter and smear with mascarpone while still warm. Sprinkle with Gorgonzola, caramelized onions, toasted walnuts, and grapes. Season with a few turns of freshly ground black pepper, drizzle lightly with some additional oil, and top with a shower of fresh parsley.