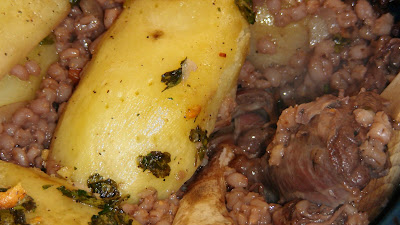 I have to say that this was the least favorite of the Tyler recipes so far. The picture in the book looked very tasty. I mean how can you go wrong with stew topped with potatoes, right? While the dish wasn't bad, it was something I would never make or serve again.

This recipe is mainly a braised dish cooked in the oven for about 3 and a half hours. You flour the lamb shanks and sear them on the stovetop. Once they are browned, you add garlic, carrots, onion, cloves, thyme, and a bay leaf. Cook this mix for 2-3 minutes, and then add a bottle of red wine and 1 quart of beef broth. Cover and braise 2 hours. After braising 2 hours, you peel 6 potatoes and halve them. You place them over the stew, cutting potatoes if necessary, and baste them with a garlic-parsley butter and cook, uncovered, for another one and a half hours.

I bought the lamb shanks at Whole Foods and they in turn bought the lamb from a local source here in Kentucky. The lamb was fresh and looked great. When the dish was complete, the lamb did fall off the bone, but it was somewhat fatty and you could still see a lot of connective tissue. Each lamb shank was mostly fat and connective tissue therefore it didn't net very much meat in the end. I spent quite a bit of time before serving trying to separate the meat and arrange it on a serving dish.

The barley had soaked up quite a bit of the red wine and was almost purple. Although it looked slightly strange, it was okay to eat. It did however taste a lot like drinking red wine, which was also strange. My husband made the comment that the whole dish tasted like barley and reminded him of drinking beer! I wouldnt' say this was a bad thing, but I think the barley was something we just weren't used to eating.

In addition to the lamb being so fatty, and the barley tasting so much of red wine, the potatoes were rather hard and never really got very soft. I followed Tyler's directions and basted them with quite a bit of butter and then even added more butter because I felt like it couldn't hurt anything.

We each had one serving and when we were done I knew that I should not save the leftovers. I was happy that I had halved the recipe and only bought 3 lamb shanks. I took the potatoes off the top and saved them for breakfast this morning and then we tossed the rest. I am not fond of throwing food away and probably only do this once or twice a year, but there was no point keeping it.

I only recommend this dish if you know that you love lamb shanks and barley. If you do decide to make this dish I would also recommend that you try baking your potatoes or cooking them in some other method to ensure they are soft when the dish is complete. The recipe is not included in this post, but I would be happy to email it to anyone if they wish to try this dish. 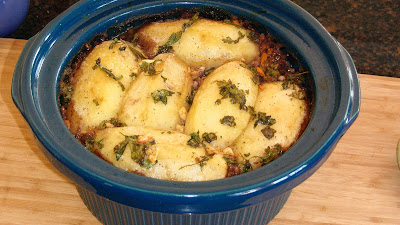