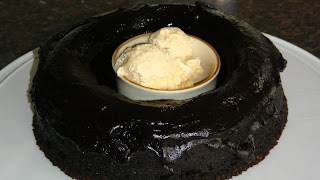 This is a delicious Root Beer Bundt Cake from the new cookbook, "Baked". I saw a post about this recipe on My Baking Adventures by Megan. She has a group of people who do informal bake alongs and was kind enough to share this recipe with me. I have been curious about the recipes from this new book, which has been featured on the Martha Stewart show. The people who wrote the book have a bakery in NYC and seem to have some unique combinations and flavors. After making this cake, I would love to buy the cookbook. I'm sold!

The base of this cake is root beer and dark chocolate. Overall, the cake has 2 cups of root beer (I used A&W). I think the dark chocolate compliments the root beer and helps to bring out the flavor. The frosting also consists of root beer, 2 oz. dark chocolate, powdered sugar, butter, salt, and dark unsweetened cocoa powder. My frosting was somewhat thick, so I added about another tablespoon of root beer to thin it out. This made the frosting capable of spreading. I have a small bundt pan, so I was also able to make 4 ramekins for individual servings later. I plan on taking the bundt cake to my in law's this afternoon. My father-in-law is a sucker for chocolate and has been known to keep Hershey miniatures in his t-shirt pocket to snack on throughout the day!

I thought this cake was fabulous and a great break from the norm. It was chocolately, but not too sweet and you could taste the root beer for sure. The frosting was also somewhat salty and I thought this was a great compliment to the cake. You have to have the vanilla ice cream with the cake because it really does taste a lot like a root beer float. I really liked this recipe and will probably make it again one day. For now, I am going to try and refrain from desserts for the next month. I'm getting ready to go on a cruise in a month and I need to fit in the bathing suit!!

Preheat the oven to 325 degrees. Generously spray the inside of a 10” bundt pan with nonstick cooking spray.In a small saucepan, heat the root beer, cocoa powder and butter over medium heat until the butter is melted. Add the sugars and whisk until dissolved. Remove from the heat and let cool.In a large bowl, whisk the flour, baking soda and salt together.In a small bowl, whisk the eggs just until beaten, then whisk them into the cooled cocoa mixture until combined. Gently fold the flour mixture into the cocoa mixture. The batter will be slightly lumpy - do not overbeat it, as it will cause the cake to be tough. Pour the batter into the prepared pan, and bake for 35-40 minutes, rotating the pan halfway through the cooking time, until a small sharp knife inserted in the cake comes clean. Transfer the pan to a wire rack to cool completely. Gently loosen the sides of the cake from the pan and turn it out onto the rack.

Root Beer Fudge Frosting:Put all the ingredients in a food processor. Pulse in short bursts until the frosting is shiny and smooth.Use a spatula to spread the fudge frosting over the crown of the bundt in a thick layer. Let the frosting set before serving, with the ice cream on the side.

Please do yourself a favor and try this one!!
Posted by Kim at 12:20 PM