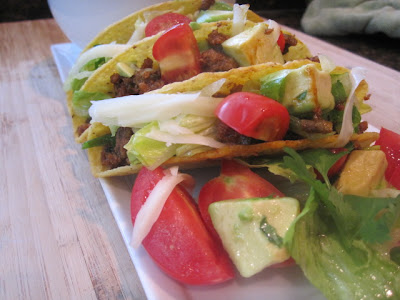 The secret ingredient to these tacos is Italian dressing! Sounds crazy, right? Herbie's Tacos is a recipe I found in Katie Lee's second book, The Comfort Table: Recipes for Everyday Occasions. Crispy fried white corn tortillas are stuffed with a spicy and extremely flavorful ground turkey filling and then topped with lettuce, scallions, cilantro, tomatoes and avocado that have been dressed in Italian dressing. According to Katie, "If they're not dripping down your hands, you didn't do something right." 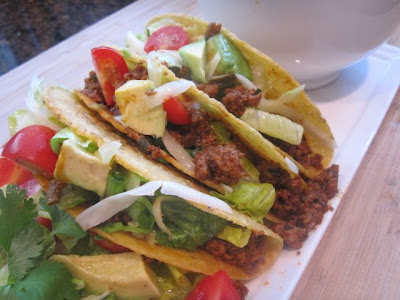 For the Taco Meat: In a large skillet over medium-high heat, heat the oil, cilantro, and scallions. Add the chiles and cook 1 minute, stirring constantly. Stir in the turkey, using a wooden spoon to break up the meat. As the meat is browning, stir in the garlic salt and chili powder. When turkey has cooked through, about 8-10 minutes, stir in the hot sauce and green sauce. Lower the heat to a simmer. Stir occasionally.

For the Salad: As the meat simmers, in a large bowl, toss all salad ingredients with the dressing. Refrigerate until needed.

For the Shells:
Line a baking sheet or large plate with paper towels. In a medium skillet, heat the oil over medium-high heat. When the oil is hot, use tongs to place a tortilla gently in the oil one at a time. After only 5 seconds, in one motion, turn the tortilla over and fold it in half. Cook 20 seconds, flip and cook an additional 20 seconds. Lift out of the oil and drain on the paper towels. Repeat with the remaining tortillas, one at a time. (The shells should not be too crisp when they come out of the oil. If they become too crisp tacos will be difficult to stuff).

Assemble the tacos by spooning the meat into shells and topping with cheese, salad and sour cream.

Notes/Results: This recipe really exceeded my expectations. The taco filling had BIG FLAVOR, more so than any I've tasted before. Looking at the filling you could see all the green flecks of cilantro and scallions and there was hints of garlic with a little bit of heat from the chiles and the taco sauce. The salad with the Italian dressing was a fun touch and added extra flavor that married well with the taco filling. I didn't make my own taco shells as stated in the recipe and confess to using boxed taco shells but these were still some fabulous tacos. Loaded down with big flavor these tacos are a fabulously messy flavor explosion that will indeed drip down your hands and onto your arms as you eat. I will be making these again and also topping my tacos with Italian dressing in the future.


Note: I am a complete saltaholic and found the seasoning in this recipe to be right on. For anyone who does not like very salty food, I would suggest reducing the garlic salt to 1 tablespoon. 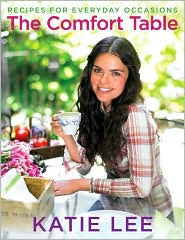