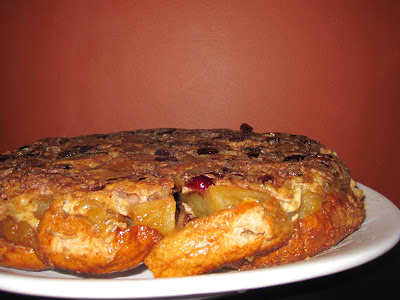 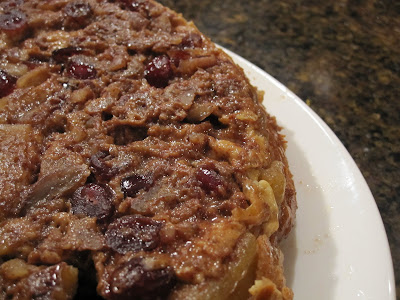 This is the last week for Tyler Florence Fridays, a cooking group that I will surely miss. Tyler Florence Fridays was the first cooking group that I joined and I enjoyed every minute of it. Along the way, I have met the kindest bloggers who I would consider great friends. I want to say a special thank you to Deb at Kahakai Kitchen, Natashya of Living in the Kitchen with Puppies, and Megan of My Baking Adventures. You all are to thank for starting and heading up such a wonderful group! Fridays will never be the same.

In the spirit of Tyler Florence Fridays, I am going to continue to post my weekly Tyler recipe on Fridays. I have at least forty-two recipes left in Stirring the Pot, so I have quite a few more Tyler recipes to share!

For the last week of TFF, I chose to make Baked Breakfast Apples with French Toast Crust. I have seen this made several times by other group members and it always gets great reviews. Armed with apples from a recent trip to the orchard I set out to try this recipe. It was very, very easy to put together.

To prepare the french toast, combine eggs, milk, vanilla, cinnamon, and salt in a shallow bowl, whisk until well combined. Lay challah slices in egg mixture to coat, turning slices occasionally to allow bread to absorb all of the liquid.

For the filling, place a 10-inch oven-safe skillet over medium heat. Add butter and brown sugar and cook for 2-3 minutes, until lightly golden and caramelized. Remove from heat. Sprinkle in the cranberries, pecans, and cinnamon. Gently press apple halves into the caramel so they are "standing" and line up one behind another so there is a flat surface on top (you may need to cut some of the halves to fill in the gaps).

Preheat oven to 350F. Place the soaked slices of challah over apples so they are completely covered. Bake in the middle of the oven for 55 50 60 minutes, until the top is golden and puffy and the apples are knife-tender. Cool slightly. Place a large platter over the top of the skillet. Being very careful, turn the skillet and the platter together, so the skillet is on top and the whole french toast dish comes out on the platter. Remove the skillet. Serve warm.

Notes/Results: This recipe is easy to throw together and is a great way to serve breakfast/brunch without a lot of fuss. It smells wonderful baking in the oven! Six medium-sized apples filled my 10" cast iron skillet perfectly. I can never find challah or brioche locally, so I subbed a thick sliced whole wheat bread (I'm trying to lighten things up anyway). It is only fair to say that I don't LOVE cooked apples. That being said, I liked this dish, but probably would not make it again. I think if baked apples are your thing, then this is definitely a recipe worth trying out. I liked the crispiness of the crusty toast when it was first out of the oven. The pecans and cranberries are a great addition. This is great served on it's own, as dessert with a scoop of vanilla, or with a whipped or poured cream over the top.