Bobby Flay Loves to Talk With His Hands 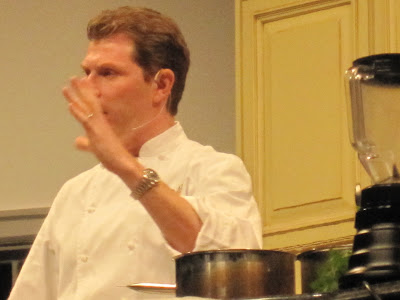 I thought it was the Italians that were known for talking with their hands? Maybe it's the Irish that love to talk with their hands. In fact, this was one of the first things I noticed about Bobby Flay. The man loves to talk with his hands. I thought it was rather cute. He was very animated and all, but I really wanted a picture of his face. In addition to talking with his hands (a lot), he is also a very quick mover. I did manage some better pics, that I will post tomorrow. In the meantime, I thought these were cute.

I also wanted to say thanks to everyone for all your sweet comments yesterday! I love reading my comments and yesterday's were filled with very kind words. I treasured them all! 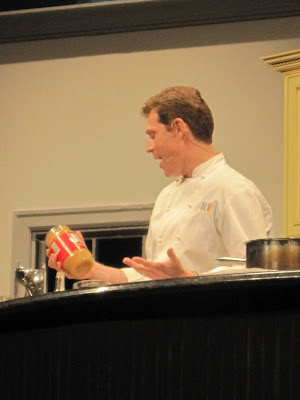 In both of these pictures (above and below) Bobby is extolling the virtues of Jif peanut butter. He used peanut butter in a glaze/sauce for some ribs that he made. Bobby shared with us that Jif was his favorite brand. He likes creamy in recipes and chunky on his sandwiches. He also said that you could use natural peanut butter, but that he doesn't like the way it separates. He said he prefers the stabilizers in Jif. Everyone in the audience laughed when he said that. 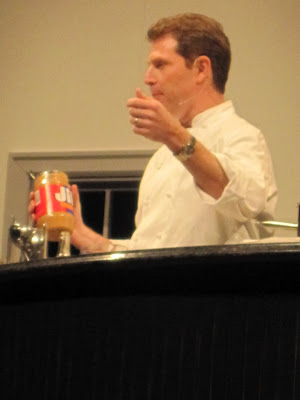 In the picture below, Bobby is talking about his visit the night before to Malone's. Malone's is a very popular steakhouse in Lexington. It's a very nice restaurant, but one that most people can afford to go to here and there. Nothing super duper fancy. He was telling us that they made him wait in line to sit down. He seemed to like that. Later on, he asked the waiter for a specialty aged bourbon that had been aged six years. He was visited by the chef a couple of minutes later. The chef apologized that they were all out of the specialty bourbon. Instead, the chef offered Bobby some 25 year aged specialty bourbon that he kept in his car!! Bobby really enjoyed the fact that this chef kept 25 year aged bourbon in his car. He did end up having some of that bourbon. This picture is him laughing about his experience at Malone's. 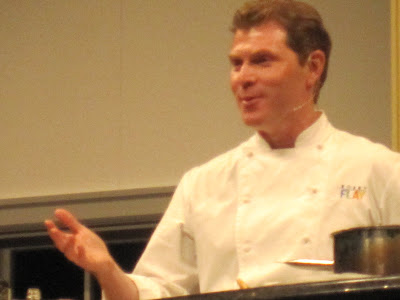 In the picture below, Bobby is busy making my apple dessert. I took this picture while I was standing in line to talk to him. An eleven-year old boy had just asked him what his favorite foods were while he was growing up. He explained that he LOVED deviled eggs, pudding, and lamb with mint jelly. Moments later, he laughed and said that was the "entire extent of his mother's cooking repertoire". Bobby turned the question around and asked the young boy what his favorite foods were. The boy replied salmon and artichokes, which made Bobby laugh. He teased the young boy, telling him that he had just learned what an artichoke was this year. He followed that up by saying how great it is that everyone was interested and learning all about food. He said he hoped that the Food Network had played a big role in that. I was the next person up in line and I shared that I had been watching him on the Food Network for years. I have to say that the Food Network has taught people a lot about food and how to cook. It was their cooking shows that inspired me to get in the kitchen. I, myself, have learned a lot watching the Food Network channel.

Don't you just love the way he's using his hands in every picture? There is a lot I could say about this, but I'll stop here. You know where I'm going anyway:D I'll have some more pictures tomorrow, along with some stories that Bobby shared with us.

I didn't get around to making this week's My Girl Paula selection. My weekend was too busy, and my hubby was sick. This week's selection was Pumpkin Gingerbread Trifle and I bet it was delicious!! Head on over to see how everyone else enjoyed it. I'll be back to My Girl Paula next week with Mini Mummies, a great Halloween recipe for the kids!!
Posted by Kim at 8:50 AM