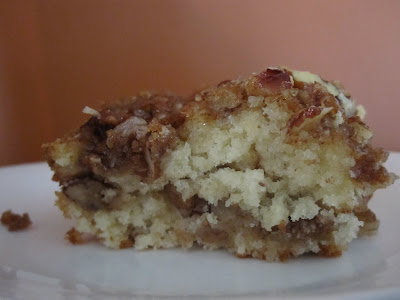 This is my first cake for the Cake Slice Bakers. We are currently baking from a new book, Southern Cakes, by Nancie McDermott. There are so many great cakes in this book, and I'm excited to try my hand at some of them. This was my first coffee cake ever and it was delicious.

The recipe calls for raisins, but I omitted them. I love raisins in cookies, but not cakes. Overall, I thought this was a wonderful recipe for coffee cake. The cake was moist and the recipe produced a lot of yummy crumb topping. I did have a little trouble spreading the second layer of cake batter over the filling, but it worked out great in the end. I halved the recipe, successfully, and ended up with about 9 large pieces of cake. My husband was out of town, so I shared the cake with my mom. My mom loved it and took some to work, where it received rave reviews. If I was going to make a coffee cake, this would be one I would go back to. I might even add in some chocolate chips next time. You can never go wrong with chocolate :D 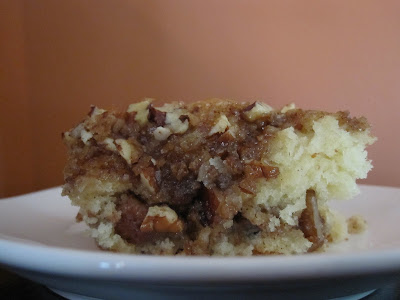 For the Cinnamon Raisin Filling:

To make the filling, combine the light brown sugar, flour and cinnamon in a bowl and stir with a fork to mix everything well. Combine the raisins and pecans in another bowl and toss to mix them. Place the cinnamon mixture, nut mixture and melted butter by the baking pan to use later.

To make the cake batter, combine the flour, baking powder and salt in a bowl. Stir the vanilla into the milk. In a large bowl combine the butter and sugar and beat with a mixer on high speed until pale yellow and evenly mixed, about 2 minutes. Scrape down the bowl to ensure a good mix. Add the eggs and beat for another 2 minutes, scraping down the bowl now and then, until the mixture is smooth and light.

Use a large spoon or spatula to add about a third of the flour mixture to the butter mixture and stir only until the flour disappears. Add a third of the milk and mix in. Repeat twice more until all the flour and milk mixtures have been incorporated. Stir just enough to keep the batter smooth.

Spread half the batter evenly into the prepared pan. Sprinkle half the cinnamon mixture over the batter followed by half the melted butter. Scatter half the raisins and nuts over the top. Spread the remaining batter carefully over the filling, using a spatula to smooth the batter all the way to the edges of the pan. Top with the leftover cinnamon, butter and nut mixture, covering the cake evenly.

Bake for 45 to 50 minutes, until the cake is golden brown, fragrant and beginning to pull away from the edges of the pan. Place the pan on a wire rack and allow to cool in the pan for 5 to 10 minutes before serving in squares right from the pan. The cake is delicious hot, warm or at room temperature.

Stay tuned for next month's recipe, it sounds perfect for this time of year !!
Posted by Kim at 8:11 PM