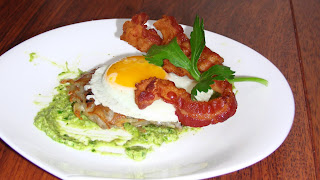 I can honestly say that I will never make this again. It was a disaster in the kitchen and took much longer than I planned. In the book, Tyler starts off by making the crispy potato pancakes, then fries the bacon and the eggs. The last step is making the celery pesto. This was totally against my better judgement and my cooking experience was telling me to start with the pesto, but I wanted to follow his directions.

I started with the potato pancakes and then fried the bacon. I put this on a baking sheet and let it set in the warm oven. I then turned my attention to the celery pesto and realized that I needed to toast the walnuts. I put them in a pan and toasted them. (The oven was already full) After the walnuts were toasted, I started on the pesto. Let me just say that making celery pesto is not a fun thing to do. You combine celery ribs (which I cut small), celery leaves, parsley, garlic, walnuts and olive oil and mix until combined. I wish it were that easy. Nothing would mix together and I think it took me close to 20 or 30 minutes to blitz all that up in the blender. It was entirely frustrating and I almost quit several times. By the time I got the pesto finished the bacon and "crispy" potato pancakes had set warming in my oven for at least 30-40 minutes. Well, you can guess that I was not happy because the whole dish took about an hour and a half and made a heck of a mess in the kitchen. To save anyone else the trouble, I am not going to post this recipe online. It was pretty and tasted fresh, but it is just not for me. Should anyone feel wild and crazy in the kitchen, this is your recipe. Good luck keeping everything hot and totally make the pesto before you even start. I also hope you have an awesome blender. It needs to be the "Hercules of blenders" to cut through celery and walnuts.

I was supposed to cook Shrimp with Sugar Snap Peas and Cashew Butter tonight at my Mom's......
I don't know if I'll get around to that or not. I'm kind of worn out after that mess. Instead we might do something that is less trouble...maybe Zucchini Ricotta Bruschetta. We'll see how I feel after a couple of hours.
Posted by Kim at 12:20 PM