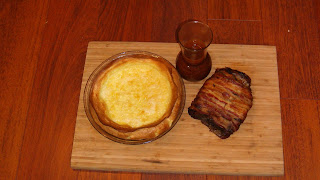 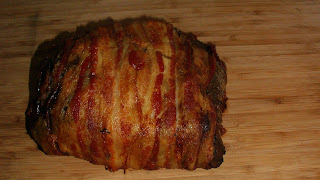 For the roast you begin by laying down a sheet of parchment paper and layering about 6-10 slices of bacon (depends on size of roast). Recipe calls for a 2lb. beef sirloin roast. I bought a 2.5 lb roast. Sprinkle bacon with: 2 cloves garlic, sliced, 2 sprigs rosemary-leaves only, 4 sprigs thyme-leaves only, and kosher salt and freshly ground black pepper. After the bacon is seasoned, you place the roast on top of the bacon and use the parchment paper to wrap the bacon around the roast evenly. The bacon will stretch if you need it to. Use kitchen string the tie up the roast and drizzle with olive oil. Place in a roasting pan and roast at 375F for about 1.5 hours or until meat thermometer reads 135F (for medium-rare) in the thickest part of roast. NOTE: My roast was larger than the recipe stated and 1.5 hours was too long for medium rare. I would start checking around 1 hour. Once the roast has reached the desired temperature, place aside on a plate to rest for 25 minutes.
For the gravy, skim and discard the fat from the drippings in the pan, leaving 1/4 cup remaining. NOTE: I only had 1/4 cup total fat/juice/drippings total in the bottom of my pan. Place roasting pan on top of stove top and set at medium-heat. Sprinkle 1/4 cup flour into pan and stir with a whisk until thickened. Whisk in 1 cup beef broth (I thought I had some beef broth, but didn't. I ended up using spicy V-8). Simmer about 12 minutes until flour is cooked and gravy is slightly thickened. Season with salt and pepper and serve with sliced beef roast and yorkshire pudding.
Yorkshire pudding: Preheat oven to 425F. Grease a round 9-inch baking pan (nonstick) and place in the oven while you make batter. In a large bowl, combine 1-1/2 cups all purpose flour, pinch of kosher salt, 3 large eggs, 1-1/2 cups milk (room temp) and 2 Tbsps, melted unsalted butter. Whisk for 2-3 minutes until smooth and shiny. Pour batter into hot pan and bake about 30 minutes (mine had to bake about 40 minutes) until pudding is puffed and golden. Serve immediately.
The flavor profiles were all there, however my roast ended up being pretty tough. My roast was .5 lbs. larger than the recipe and I followed the time listed (1.5 hours at 375). While cooking from Stirring the Pot, I will start checking with a thermometer periodically. Maybe some of Tyler's suggested "cooking times" are off a bit. However, I do not think that cooking this roast to medium made it tough. It seems like I just got a bad cut of meat. This is rare for Whole Foods, but I guess it happens. Sirloin roast by nature is one of the leaner cuts and when I sliced mine there was a line of fat right down the middle of each slice. Not appealing!! I am pretty convinced it was a bad cut. I would love to hear what others think though. Please share your ideas on this one.
The gravy and yorkshire pudding were great and I will make the pudding again. It is a totally different texture and consistency than anything else. I would liken it to a pancake. This recipe is a keeper!
The pictures for the recipe are not that great. We had a crazy day today. I woke up at 4am with my 2 year old son who had a fever. He insisted on going downstairs to watch Mickey Mouse. Naturally his ears, head, toes and even his milk (yes, even the milk) was hurting and we never went back to sleep. At 8am the fun really starts....try to find a doctor who is open on Saturday, locate the latest and greatest Webkin for birthday party daughter is going to, run out to buy the Webkin and make it home in time for sick toddler to go to doctor's appointment, sick toddler throws up as he is going out the door to doctor's appointment, wash toddler's brand new coat and special blanket, doctor's appointment starts right when it is time to leave for birthday party, answer the question "when can I leave for the party" approximately 100 times, realize that you do not have beef broth as you pull your overcooked roast out of the oven. Use V-8 in place of beef broth, and unlock door for husband and screaming toddler who had no sleep.
Now I have to say that I was pretty lucky in all of this. Yes, I woke up at 4am but it was my husband who went to the store, took the little one to the doctor, and eventually took my daughter to her party. I mean I was at home inventing new gravy recipes after all. It's not everyday one makes gravy with V-8. Well, finally it was time to take a picture of the meal and eat, except for the flash on the camera wasn't working. I stared dazed and confused at the camera and then I got smart. I found the one person who can fix anything. The guy who had been "fixing things" all day long and you know what? I realized that today wasn't a bad day at all!
Posted by Kim at 7:46 PM