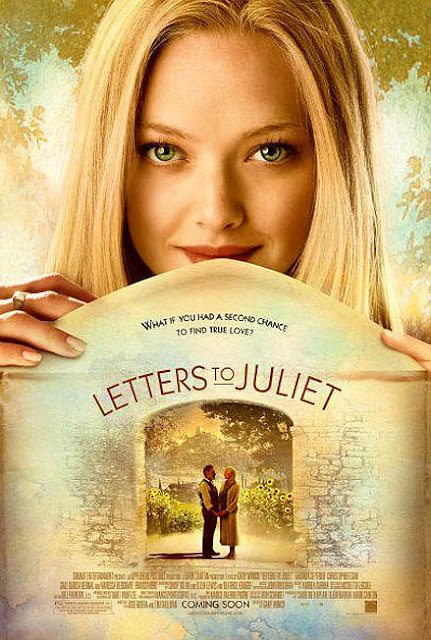 A romantic comedy with beautiful scenic views of the Italian countryside, Letters to Juliet, was my pick for July's Food 'n Flix event. It appears the movie left everyone craving sweet, light, refreshing dishes perfect for summer.
Let's have dessert first, shall we? 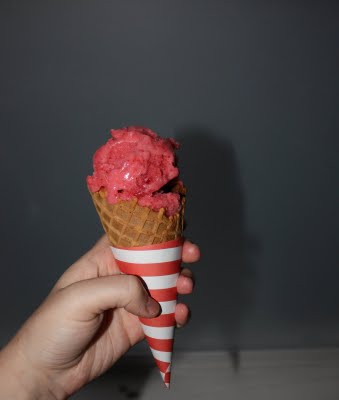 Elizabeth of The Law Student's Cookbook got swept up in the romance of the movie and made a beautiful and deep pink Strawberry-Buttermilk Gelato.   Elizabeth says, "Sophie enjoys gelato in the movie and I can't deny how jealous I was when watching. I'm not only jealous of the gelato, but I want to go to Italy so bad and enjoy all the food."    I'm right there with you, Elizabeth! 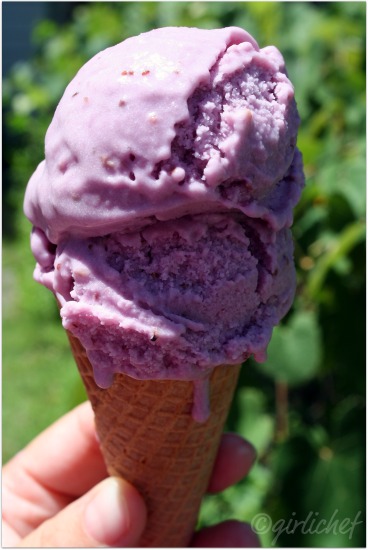 Heather of girlichef made a very inspiring Mixed Berry Gelato.  Heather says, "While there were many food inspirations for me in this film, such as homemade pasta and a perfect risotto and cheese...olive oil...bread...truffles...I chose to make gelato.  Inspired by the the scene in which Sophie and Charlie sit and eat gelato and find themselves getting along."   I have to say it sure would be hard to eat gelato and not get along, especially after eating Heather's version made with blueberries and strawberries. 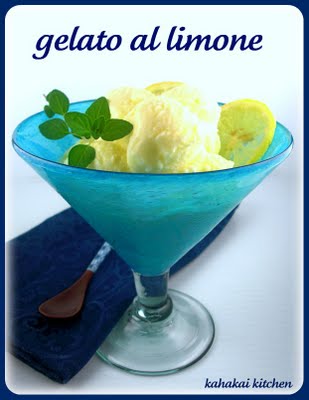 Next up is Deb of Kahakai Kitchen who was inspired to make two recipes to share.   First up is a wonderfully refreshing creamy lemon ice cream, Gelato al Limone, which looks dreamy and all...but 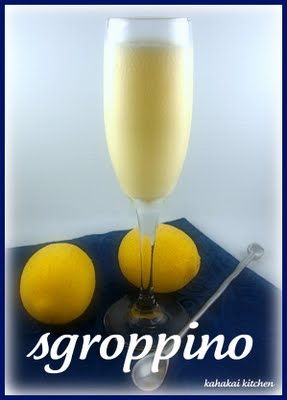 Deb's pièce de résistance is this sunny-hued Sgroppino, a tall glass of creamy lemony ice cream, Prosecco, and Limoncello.  Deb says, "The only thing more appealing than a big bowl of creamy gelato is combining it with prosecco and vodka (or limoncello in my case) into the best kind of adult "milkshake." Who knows......Charlie and Sophie probably would have warmed up to each other much quicker if they had shared a few sgroppinos.... 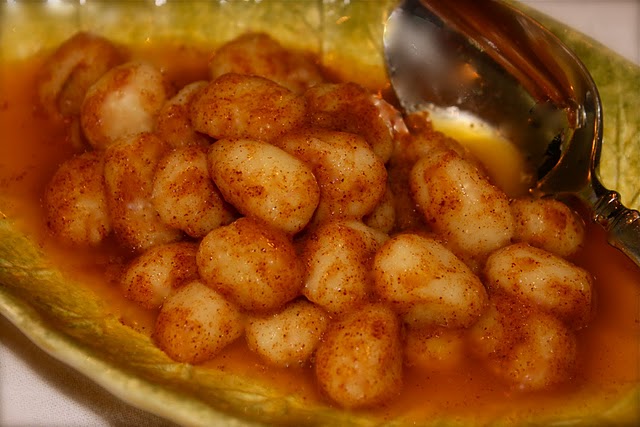 Transitioning us from the dreamy world of ice cream we have Roz of La Bella Vita who made two versions of a Veronese specialty, Gnocchi con Zucchero e' Cannella.   The gnocchi can be served as a dessert option with butter, sugar, and cinnamon or as an entree option with the addition of Parmesan cheese.  Roz says, " set in Verona, Italy, a young American woman is inspired by the real-life activity of people writing letters to Juliet and inserting them into the walls of Juliet's courtyard.  'Secretaries of Juliet' reply to those who wrote the letters.   The story unfolds about the romantic lives of two women, one young and one in mid-life and how their endeavors play out in the hills of Italy. That last sentence sums up the movie perfectly, Roz. 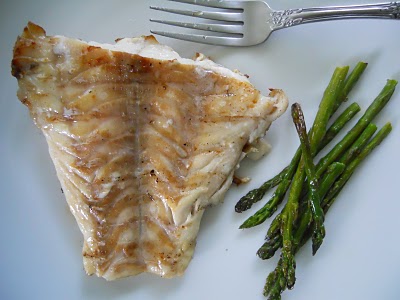 Tina of Life in the Slow Lane at Squirrel Head Manor has a rather fun and comical approach to her recipe choice.   Tina says, "As Claire is searching for “her Lorenzo” one of the men she speaks with is quite taken  by her. He suggests, “…if you don’t find your Lorenzo, come back and let me cook you a fish dinner.” I thought that was pretty cool. An old Italian man still trying to put the moves on a woman. After watching the movie and discussing the meal, my man says to me, "'Let me cook YOU a fish dinner,"   and yeah....I was sold.  Tina's man cooked her Grilled Fish, Saffron Risotto, Roasted Asparagus with a little white wine on the side. I think Tina's man should be giving lessons. 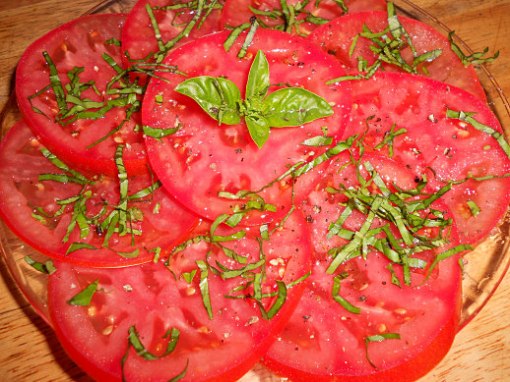 Glennis from Can't Believe We Ate made a beautiful plate of Fresh Off The Vine Tomatoes.  Glennis says, "Since this is a love story…and tomatoes were once known as “love apples…” my offering for this flick is a simple plate of fresh off the vine, sliced tomatoes, dressed with extra virgin olive oil and a chiffonade of just picked basil…"  I love the way you think, Glennis. 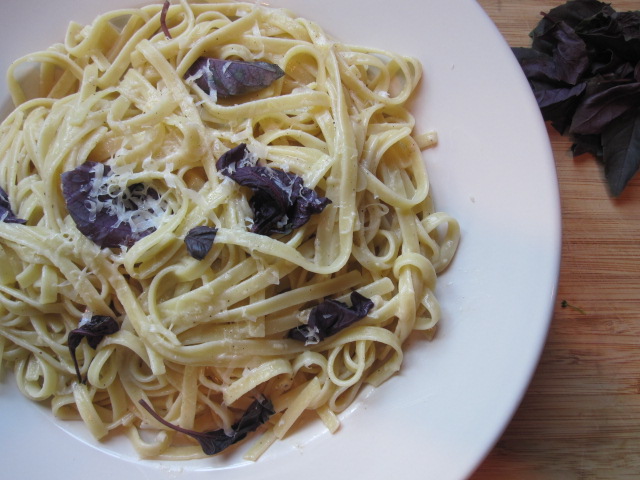 Here at Stirring the Pot, I said, "It soon becomes clear to Sophie that Victor's top priority is not Sophie, but his new restaurant.  Poor Victor doesn't even realize his ways.  He's so obsessed with food and everything regarding it that he doesn't even realize he's losing Sophie."  Victor's lack of attention to Sophie made me think about how we should all make more time for our loved ones so I made a super quick pasta dish, Fettucine Limone Parmeggiano.  The sauce is fragrant with lemon and Parmesan and can be made in the time it takes to boil the pasta.
Thank you to all who participated and also thank you to Heather of girlichef for asking me to host this round of Food 'n Flix!

The upcoming flick for August is Fried Green Tomatoes and is being hosted by the lovely Glennis from  Can't Believe We Ate.  Fried Green Tomatoes is a classic and I know you will draw much inspiration from it. Head on over to check out the announcement!
Posted by Kim at 7:15 PM