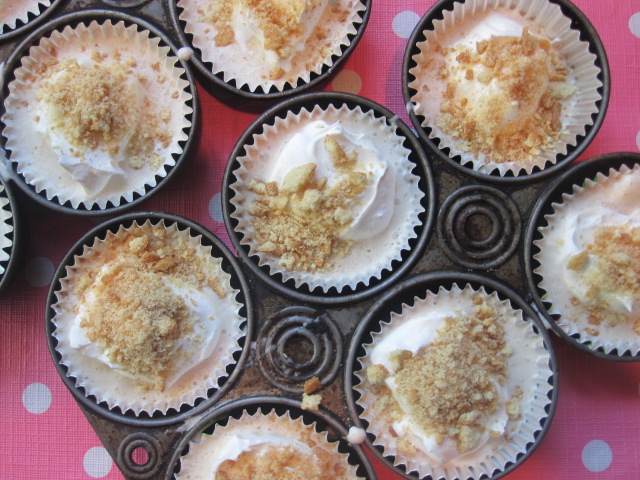 Those of you who've been following me for any length of time have probably heard me say that banana pudding is one of my favorite desserts. Banana pudding can be made all kinds of ways, but my all-time favorite recipe for banana pudding is Paula Deen's cool and creamy Not Yo' Mama's Banana Pudding. Paula's recipe is the ultimate and oh so delicious.  It is not, however, figure friendly!

When I saw this recipe for Banana Pudding Ice Cream Cupcakes while browsing through my Weight Watcher's books I jumped on it.  Now, I'll warn you.  This recipe contains store bought cookie wafers, Cool Whip Lite, and low-fat ice cream.  Some of you will not be able to overlook that.  However, some of you may feel like I do, which is to say that I can forgive these ingredients from time to time if it means I can indulge in one of my favorite desserts. 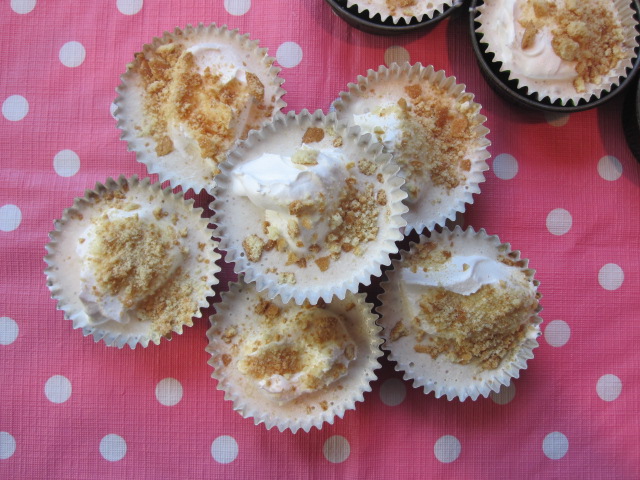 If you are bothered by the list of ingredients, you could certainly use a homemade cookie (shortbread or gingersnaps would be nice), real whipped cream, and/or regular or homemade ice cream.  Whichever route you chose, this recipe is fun and the cupcake portion helps to keep you in check so that you don't blow it.  The end result is a very creamy frozen version of banana pudding that is luscious and fulfilling.  I may even consider hiding them for myself as a mid-afternoon snack for the next several days.  Shhh!! Serves 12
24 reduced-fat vanilla wafers, divided
2 ripe bananas
1 tablespoon lemon juice
1-3/4 cups low-fat vanilla ice cream
6 ounces of Cool Whip Lite, thawed
Place 1 vanilla wafer in the bottom of 12 foil-lined muffin cups.
Process bananas and lemon juice in a blender or food processor until smooth.  Add all of the ice cream; pulse 4-5 times or just until blended.  Add half of the Cool Whip (reserving half for garnish), as well as 6 vanilla wafers, and pulse 2-3 times or just until blended.
Divide ice cream mixture evenly among muffin cups; cover with plastic wrap and freeze.
Crush remaining 6 vanilla wafers to make coarse crumbs. Top each ice cream cup evenly with remaining Cool Whip; sprinkle with about a tablespoon of the coarse wafer crumbs.  Serve immediately, or freeze for later.
Note: Once the cupcakes set up in the freezer they will be frozen solid.  They do benefit from a quick thaw on the counter or a quick 5 second zap in the microwave. 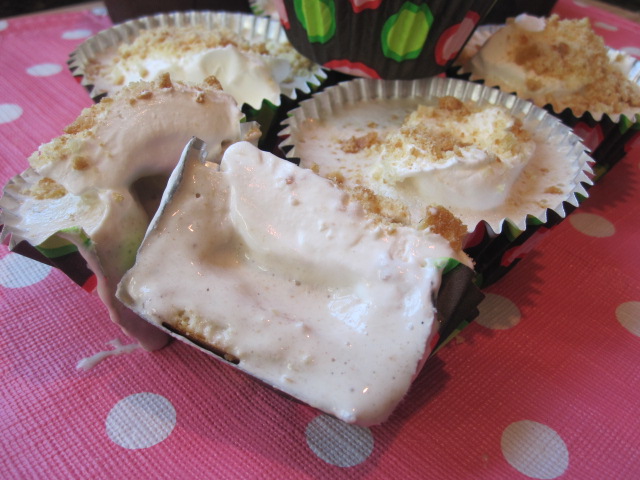