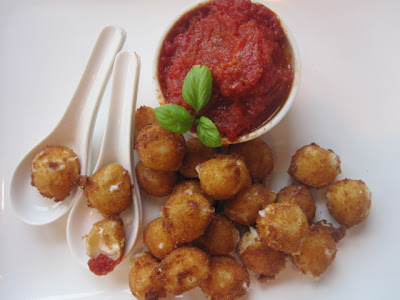 A couple of years back my local Williams-Sonoma featured cooking classes with various topics like risotto, pasta, pizza, weeknight meals, etc.  They would hire well-known local chefs to host 2-3 hour cooking classes for a class of 12.  Each cooking class was a whopping $40, but this was before I discovered blogging and I was desperate for anything that had to do with cooking, so I paid the price. I can still remember how excited I would get before those cooking classes.  It was as if each new class was an exciting new adventure for my senses.

There is one cooking class that I remember extremely well.  It was the cooking class all about CHEESE. It was a full house that night as they allowed 14 people to attend and we were all crammed around an island in the middle of the store.  The chef that night was one of the most well-known chefs in town, a personal chef to the sheik who owned the largest horse farm in Lexington.  I don't remember what we made that night, probably some fancy foods with cheese.

What I do remember is this.

Halfway through the class, one of the quietest ladies in the audience spoke up.  I think she just assumed that since it was a class about CHEESE that we were going to make fried cheese.  When she found out that we weren't making fried cheese she just wasn't going to let it go. The chef was trying to move on, but the woman just wouldn't let up.  She asked question after question, all regarding fried cheese, until most of the class and even the chef  became annoyed. On the other hand, I had to suppress my giggles because I thought it was kinda cute.  She had paid $40, just like the rest of us, and she was not walking away until she knew how to make fried cheese.  Who can blame her?  Fried cheese is one of the best things on the planet! 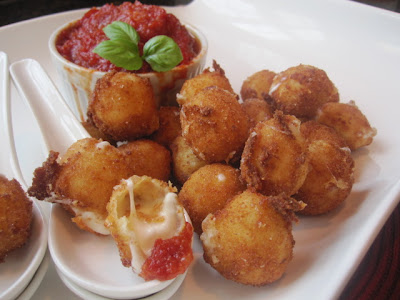 For the chutney: In a blender, combine the garlic, ginger, 1/4 teaspoon salt, vinegar, sugar, olive oil, cumin and pepper. Blend until smooth. Pour into a medium, heavy-bottomed saucepan and add the tomatoes. Bring the mixture to a boil over high heat, then reduce the heat and simmer, stirring occasionally, until most of the liquid has evaporated and the mixture is thick, about 45 to 55 minutes. Using the back of a wooden spoon, gently break up the tomatoes as they begin to soften during cooking. Season with salt, to taste. Let the chutney cool to room temperature, about 35 minutes. Place in a serving bowl.

In a large heavy-bottomed saucepan, pour in enough oil to fill the pan about a third of the way. Heat over medium heat until a deep-frying thermometer inserted in the oil reaches 375 degrees F. (If you don't have a thermometer a cube of bread will brown in about 1 to 2 minutes.) In batches, fry the bocconcini until golden brown, about 15 to 20 seconds. Drain on paper towels.

Arrange the bocconcini on a platter and serve the chutney alongside as an accompaniment. 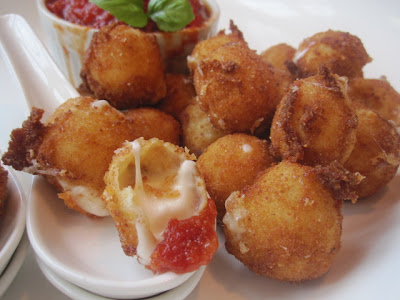 Notes/Results: Absolutely addictive and delicious!  There is just something about those cute little balls of crispy melting cheese that are irresistible.  The tomato and garlic chutney is perfect for me as I like spicy food, but it is pretty darn spicy so you may consider holding back on the cayenne. I do want to note that you need some time to make this recipe as it requires some planning ahead.  This isn't one of those recipes that you can just throw together. The cheese needs to be removed from the container, drained, and allowed to drain/dry in the refrigerator for 2 hours.  In addition, the chutney takes about 35-45 minutes to cook down on the stove.  Also, once the cheese is breaded, it has to set up in the freezer to harden for at least 20 minutes.
Posted by Kim at 5:00 PM