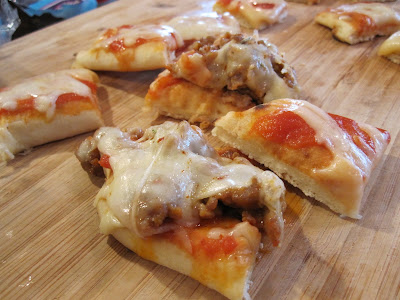 This is my 200th post! While up in Ohio for Christmas I was able to go shopping at a Trader Joe's, which is one of my favorite grocery stores. I really wish I had enough room for a cooler because there were so many things that I wanted to buy and bring home. I stocked up on wine because they have such good deals AND I live in a dry county that doesn't sell any alcohol. I bought some great salami with white wine, some gorgonzola crackers, and I also bought this delicious Naan Bread. 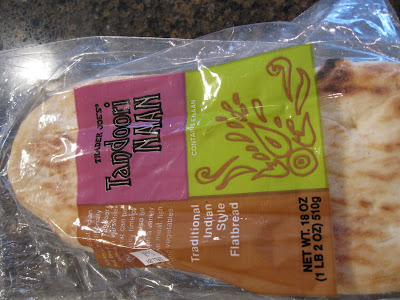 I had been wanting to try Naan Bread, but never found it anywhere here in Kentucky. It's really a shame because the bread is thick, soft, fluffy and delicious. 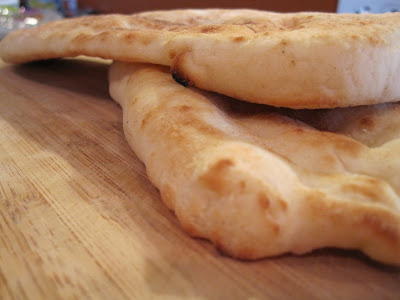 Plus, it has a really cool shape to it and lends itself well to some delicious and speedy pizza.

By the time we got home, 5 hours later, I only had two pieces of naan bread left. I had Nigella's recipe for Naan Pizza in mind when I bought the bread, so I had to get to work right away before it was all gone.

This week over at I Heart Cooking Clubs we are celebrating small plates. When I think of small plates I think of appetizers, or little bites, and these little pizza bites are perfect for grown ups and kiddos.

Preheat the oven to 425F. Line a baking sheet with foil or parchment.

Top the pizza with toppings of your choice, starting with the tomato sauce, veggies or meat, and cheese. Lay thyme or other seasonings on top.

Bake in oven for 5 minutes or until pizza has reached the desired result.

Notes/Results: We loved it! The naan bread is very similar to pizza crust and makes a very quick pizza. I used Nigella's recipe as a guideline and create a simple cheese pizza for my daughter and a hot and spicy sausage pizza for my husband. I cut them into little pizza bites and they were gone in no time. The only problem was that we wanted more and we had no more naan bread left!! I guess I'm gonna have to learn how to make some naan bread because there is none to be found around here. If naan bread is sold in your local market, definitely whip this recipe up. It is a real keeper that is quick and easy! Even the kids will love it.

Head on over to I Heart Cooking Clubs to check out all the other small plates this week.
Posted by Kim at 10:31 AM