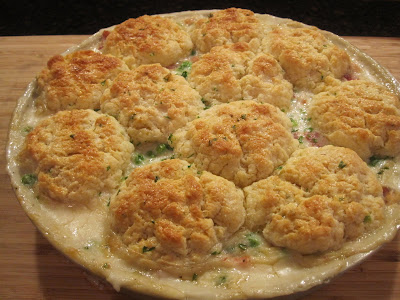 Well, we've all heard of chicken, turkey, or beef pot pie. But, have you ever heard of Ham Pot Pie? I happened across a recipe for ham pot pie and thought I would give it a try. I happened to have leftover ham from Christmas, which I had frozen and needed to use it up. I thought this recipe would give new life to that frozen ham so I was excited to get to work. My husband and daughter were skeptical. My husband kept saying that ham just didn't go into a pot pie. He insisted that it wouldn't work. I knew I had to win them over, so I decided to go with Ina Garten's biscuit topping instead of the pie crust the recipe called for. How can anyone resist perfectly golden buttery biscuits sitting atop a creamy filling? 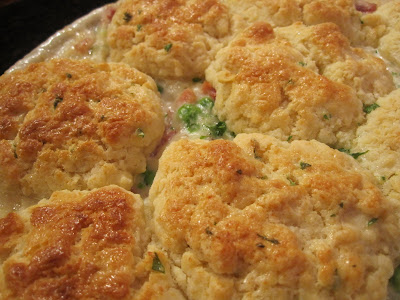 Preheat oven to 375°F. Saute onion, celery, carrots and potatoes in butter for 10 minutes.Add flour to sauteed mixture, stirring well. Cook one minute stirring constantly. Combine broth and half and half. Gradually stir into vegetable mixture. Cook over medium heat stirring constantly until thickened and bubbly. Stir in salt and pepper; add ham and stir well. Pour into shallow 2 quart casserole dish and top with biscuits. Bake 30-40 minutes until biscuits are cooked through and golden.
I topped my ham pot pie with Ina's biscuit recipe from Chicken Stew with Biscuits. It was just the right touch and her biscuits were delicious.

Combine the flour, baking powder, salt, and sugar in the bowl of an electric mixer fitted with the paddle attachment. Add the butter and mix on low speed until the butter is the size of peas. Add the half-and-half and combine on low speed. Mix in the parsley. Dump the dough out on a well-floured board and, with a rolling pin, roll out to 3/8-inch thick. Cut out twelve circles with a 2 1/2-inch round cutter. (I didn't roll the dough out. I simply formed 12 biscuits by hand and laid them on top the pie). 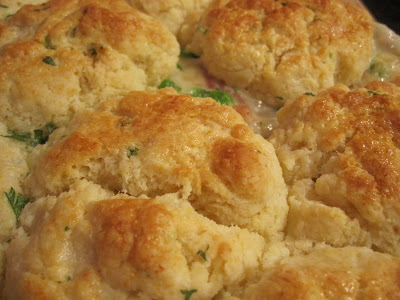 Notes/Results: The biscuits really made this dish. The tops of the biscuits had the lightest crispness and the inside of the biscuit was fluffy and wonderful. I loved the little specks of parsley flakes going throughout the biscuits. The creamy filling had bubbled up over top the biscuits and was so comforting. I think it was a great way to use up frozen ham. My daughter didn't care for it, but she is extremely picky. My husband couldn't get past the fact that it was a ham pot pie, but he ate his fair share.

What do you think? Do you think you'd give a ham pot pie a try? Or, do you think pot pies should be saved for chicken, turkey and beef only?