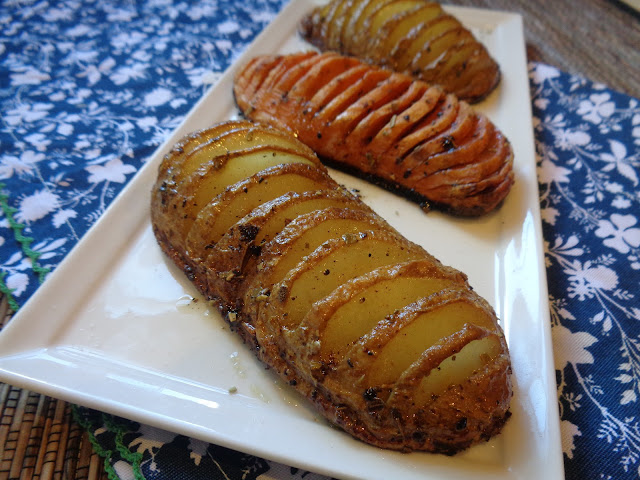 On a lazy Sunday afternoon I like easy and quick recipes. When I first spotted your hassleback potatoes I thoutht they seemed quite simple.

The ingredients were few. The directions were short. How hard could it really be to cut some slits in a few potatoes and throw them in the oven?

A quick trip to my pantry to grab some potatoes. I grab some russets and a sweet potato. These will be in the oven in no time I think to myself.

Then I realize you want me to peel the potatoes. I rewrite the recipe. No, I will not peel the russets, Tessa. I will, however, peel the sweet potato.

Then I read as you say, "Peel the potatoes and cut them in half lengthwise. Sit them, flat side, on a chopping board. Using a small, sharp knife, start at one end of the potato and cut down through the top, about a third of the way through. Make another tiny cut away from the first, slightly on the diagonal toward the first cut, and break away the little piece of potato to make a slit. Continue along the potato, making slits about 1/4 inch apart.

I'm puzzled right from the start because most people hassleback an entire potato and you want me to only hassle the back of half a potato? I do some quick research online and find that yes, I am not crazy, and yes, most recipe do hassle the entire back of an entire potato.

Fine, Tessa. I will play your games and cut my potatoes in half lengthwise. I am only doing this because as I mentioned before; I am about easy and quick, and half a potato cooks faster than a whole potato.

However, I then realize that I will have to hassleback even more potato than if I had just hassled a whole potato? Do you understand where I'm going with this, Tessa?

So there I am rereading your directions about how to hassleback my potatoes when I realize that this recipe is quite a hassle! I wanted to blame it all on you, Tessa. However you did name them Hassleback Potatoes so I suppose it's my fault.

How did I miss this?

Let me tell you, Tessa. I didn't have very kind words to say as I was cutting quarter inch slits in all my potatoes, Tessa. When you call for large potatoes did you realize how many slits one would have to cut? It was rather tedious when it came to the russet potatoes and then it was damn near impossible when it came to the sweet potato, but cut away I did.

I put those hassles on the sheet pan and covered them in your mixture of butter, oil, salt, pepper, and sage and stuck them in the oven. I wanted to be done with them, but then I had to baste them with the butter/oil mixture about every 15 minutes.

These potatoes really are hassle, Tessa. A hassle right in the ol' back. 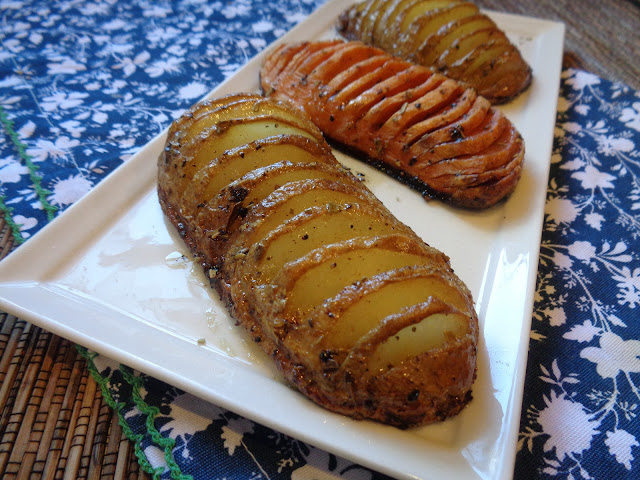 During the baking, I stopped to read reviews on hassleback and I found a lot of complaints, Tessa. People said they were overcooked and dry and too hard, etc. I started to get kinda angry, Tessa. After all that work....my potatoes better be delicious.

My son took a bite and was like, "This is way better than a normal baked potato. It has way more flavor and texture and I just love it. Do you have more?" Of course, I had more. I had hassled my way through 3 potatoes after all. I had 6 hassleback halves.

All that hassle, Tessa, and my potatoes were gone in a flash. Everyone ate them up quicker than I hassled them! Imagine that!

Anyway, they are now a family favorite, so thanks a lot. Looks like I will be hassling with potatoes a lot more in the future. 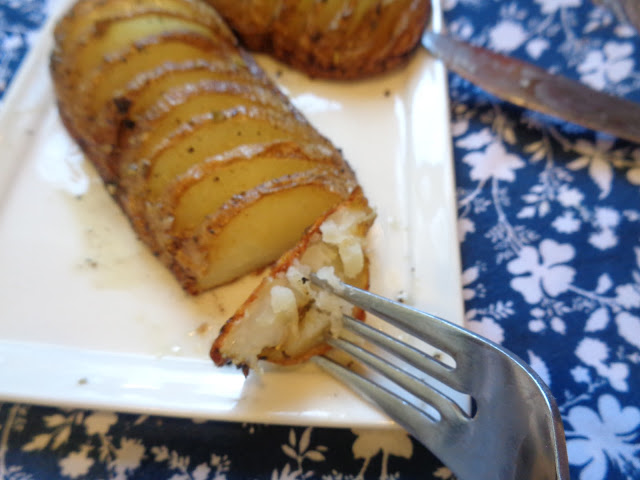 a small handful of fresh sage

Preheat your oven to 425F. Peel the potatoes and cut them in half lengthwise. Sit them, flat side side, on a chopping board. Using a small, sharp knife, start at one end of the potato and cut down through the top, about a third of the way through. Make another tiny cut away from the first, slightly on the diagonal toward the first cut, and break away the little piece of potato to make a slit. Continue along the potato, making slits about 1/4 inch apart.

Handling the potatoes carefully so that they don't break, arrange them in a baking pan. Add the butter and oil and season with salt and pepper. Scatter the sage leaves around and bake for 45 minutes to 1 hour, or until the potatoes are golden and crispy. Spoon a little of the butter pan juices over the top from time to time and gently toss them so they don't stick (but don't touch them for the first 15 minutes or so, or they will simply break). Serve immediately. 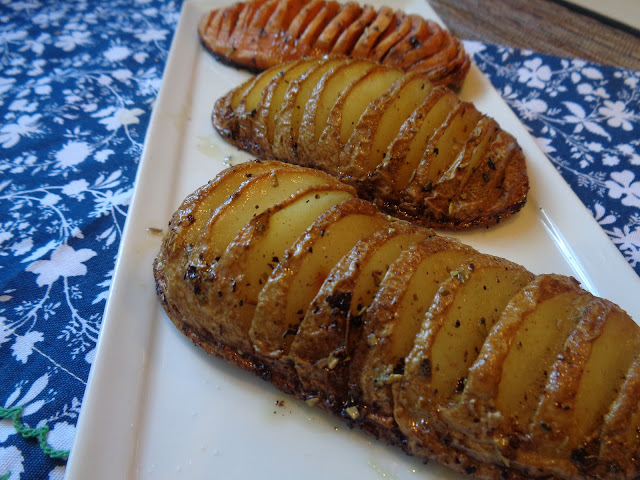 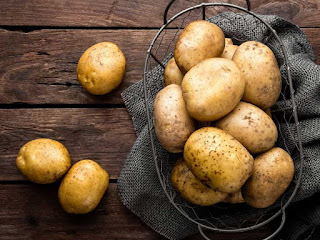