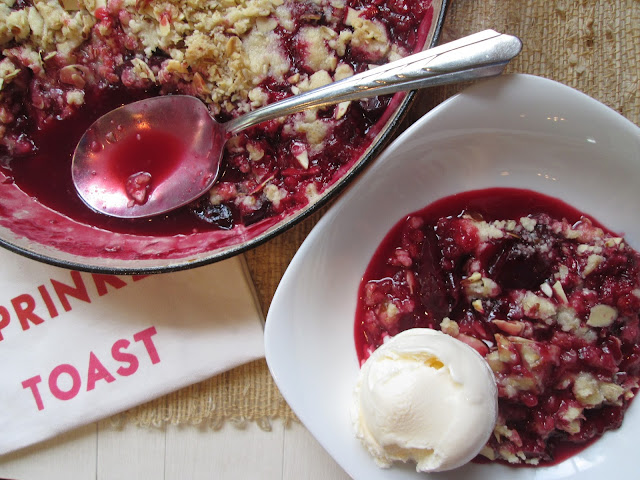 In the summer my Grandpa's plum tree would be heavy with the weight of ripe juicy plums. Many were eaten right from the tree, ruby red juice staining our chins and clothes. There were too many to eat out of hand, so Mom would make plum jelly, and lots of pies, crumbles, and cobblers, until we exhausted the lot.

Many summers the plums were sweeter than others, but we loved them regardless, except for that one summer.  That summer the plums were almost inedible. We found them sour and dry and none of the usual recipes made them any better. Not one to waste, my mom decided to try her hand at making plum wine.

I vaguely remember the  "wine making" process. I know there was a barrel and some tools down in our basement and mom had to go down and attend to it daily, or so it seemed. Mostly what I remember about the summer of plum wine was the EPIC, and I do mean EPIC, party my parents had when the wine was ready.  In their defense, it was another time, parenting in the early 80's was much different, and definitely not politically correct, as it is today. The only way I can explain the nature of this plum wine party is to say that it rivaled, or even surpassed, any college frat party. In fact, for years my parent's friends talked about that party and begged Mom to make more plum wine, but Mom always smiled and said, "never again".

Like Mom's plum wine, this Plum & Cinnamon Crumble is also epic, but much easier to make and enjoy! The plums offer a wonderful balance of sweet and tart, the addition of cinnamon is subtle, and the filling-to-crumble ratio is just right, not too much of one or the other. It's absolutely incredible with a scoop of vanilla ice cream. One of the best things I've made in awhile. I urge you to buy some ripe juicy plums and try it for yourself! 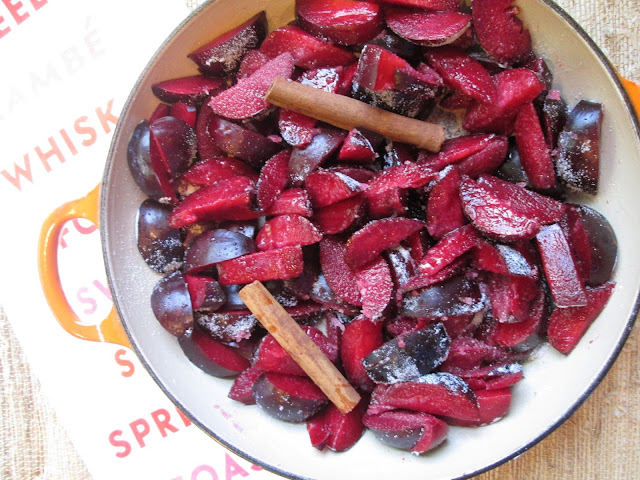 Note: Adjust sugar depending on your fruit and taste. If fully ripe, you may not need the full 1/3 cup. If not ripe enough, then you may need more. Mix in sugar, taste, and adjust to your liking. This recipe, with ripe plums, is definitely written to be sweet- but we like it that way, so we think it's perfect!

Preheat the oven to 350F. To make the filling: Toss the plums, sugar, and cinnamon sticks in an 8-inch square baking dish (or similar vessel). Arrange the mixture evenly in the dish, tucking the cinnamon sticks beneath the plums.

To make the topping: Mix the flour, sugar, and oats in a medium bowl to blend. Using your fingers, work the butter into the flour mixture until moist clumps form.  Mix in the almonds. Sprinkle the crumb topping evenly over the plum mixture.

Bake for 45 minutes, or until the juices are bubbling, the fruit is tender, and the topping is golden brown. Allow the crumble to stand at room temperature for 5 minutes before serving.

Spoon the crumble into bowls, discarding the cinnamon sticks, and serve with vanilla ice cream. 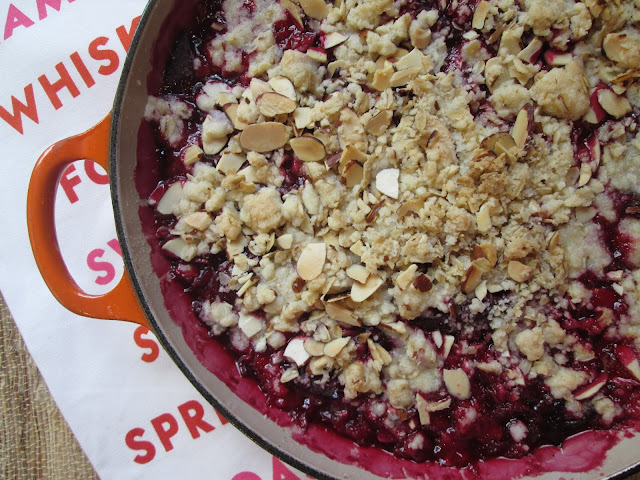