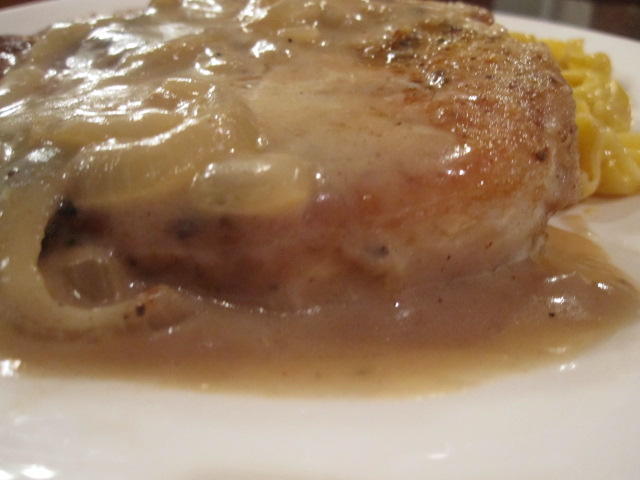 My husband has quite a few favorite dishes, but his all-time favorite meal is pork chops with macaroni and cheese.  He's told me several times this meal would be his last supper.  So, when I saw this recipe for Smothered Pork Chops in the latest Food Network magazine I knew I had to try it.

After a day of working outside in the cold I decided to indulge my husband with a Smothered Pork Chop Dinner.  I bought four 1" - 1&1/2" thick cut pork chops. Upon looking at the sheer size of my pork chops I started to question cooking them on the stovetop as the recipe suggested.  That's when the idea for a Throwdown came to mind.  I immediately decided to cook two chops on the stovetop simmered in the gravy and two chops seared stovetop and pan roasted in the oven.

Smothered Pork Chops
Pan Roasted vs. Cooked Stovetop
Adapted from Food Network Magazine December 2011 Issue
Serves 4
4 bone-in center cut pork chops (about 1 inch thick)
Kosher salt
1 teaspoon Cajun seasoning
3/4 cup all-purpose flour
2 tablespoons extra virgin olive oil
1 tablespoon unsalted butter
1 large onion, sliced 1/4 inch thick
1 tablespoon fresh thyme, chopped (I omitted this)
1-1/2 cups chicken broth
2/3 cup buttermilk (I used regular milk)
If pan roasting chops preheat oven to 350F.
Sprinkle the pork chops all over with salt and the Cajun seasoning.  Pour the flour into a shallow bowl.  Dredge the chops in the flour, turning to coat, and tap off any excess.  Reserve the remaining flour.
Heat the olive oil in a large skillet over medium-high heat.  Add the chops; cook until browned, 2-3 minutes per side.  Transfer to a plate.
Add the butter, onion, thyme, and a pinch of salt to the skillet.  Cook, stirring occasionally, until the onion is golden brown, 8 to 10 minutes.  Add 2 tablespoons of the reserved flour to the skillet and cook, stirring, 1 minute.  Add the chicken broth, bring to a boil and cook until reduced by one-third, about 2 minutes.
If cooking pork chops on the stovetop (in the gravy): Add the buttermilk (or regular milk) and return the chops to the skillet.  Bring the sauce to a simmer, then reduce the heat to medium low and cook until the sauce is thickened and the chops are just cooked through, 10-12 minutes.
If pan roasting the pork chops:  Continue to make the gravy by adding the buttermilk (or regular milk) to the pan you seared the chops in.  You will need another oven safe pan to pan roast the chops in (preferably cast iron).  Season the oven safe pan with about 1- 2 teaspoons of olive oil, add the pork chops, and place in the oven (uncovered) for about 30 minutes.  Remove from the skillet, top with the gravy, and serve.
The Results:  I definitely think the pan roasted version of these pork chops was superior for several reasons.  The pan roasted pork chops had slightly seared golden brown edges and we really loved topping them with the gravy instead of having the pork chop swimming in the gravy.  Pan Roasting the pork chops was easier, took only 30 minutes, and the pan was much easier to clean up.  I also think when you pan roast you lock in the moisture and end up with a juicier end product.  I personally find that I'm much less likely to overcook my meat when I pan roast as opposed to other methods.
The stovetop version tasted very similar and was really delicious.  However, since the pork chops were cooked in the gravy they didn't have as much texture.  Additionally, cooking the pork chops on the stovetop took about 45 minutes to an hour (much longer than the pan roasted version) and cleaning the pan was just about impossible.
Both versions were delicious, but we did prefer the pan roasted version and would alter the recipe to make them this way again.
Which one do you think you would prefer?
Posted by Kim at 3:45 PM