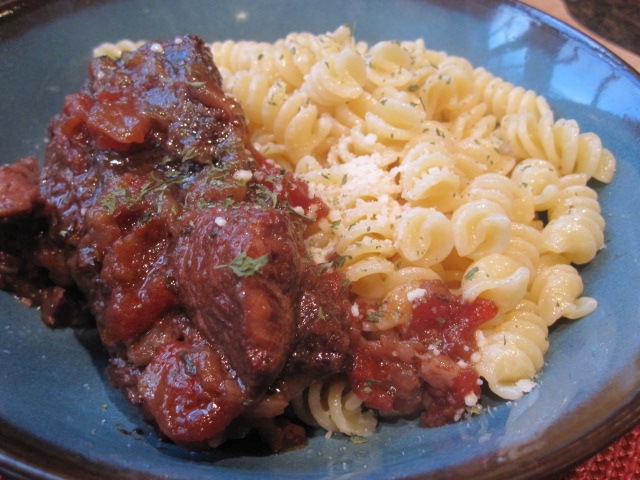 This recipe, otherwise known as Kokkinsto or Reddened, is a fantastic Greek version of Pot Roast that is flavored with red onion, red wine, tomatoes and a pinch of cinnamon. It is simply outstanding.  Quite possibly one of my favorite Tessa Kiros recipes that I've tried so far.  Of course, I will tell you that I'm really partial to any variation of pot roast, so I'm probably a bit biased.
There are a few things that set this dish apart from your standard pot roast.  First, the roast is cut into 6 slices and each slice is browned until golden.  I gotta say it.  This is brilliant.  Instead of browning and seasoning an entire roast, you brown and season each individual slice resulting in perfectly seasoned meat.  Additionally, each slice held up to the cooking and made for a really nice presentation when serving.  No worries about trying to slice a roast afterwards!
Next up is the red wine and tomatoes.  They create a deep rich flavor and after cooking away in the oven for 3 hours the tomatoes get all jammy.  Lastly, is the cinnamon.  It's just a pinch, but just enough to deepen the flavor and contribute some complexity to the dish.  We're talking flavorful, tender, and deeply satisfying.  And, to top it all off, Tessa suggests serving the roast with pasta or french fries, which is definitely a break from the standard mashed potatoes.
So, if you're looking for a different way to serve up roast this season then I highly suggest making this recipe.  It's fantastic!  A huge thanks to my friend Michelle of Ms. en Place for pointing this recipe out. 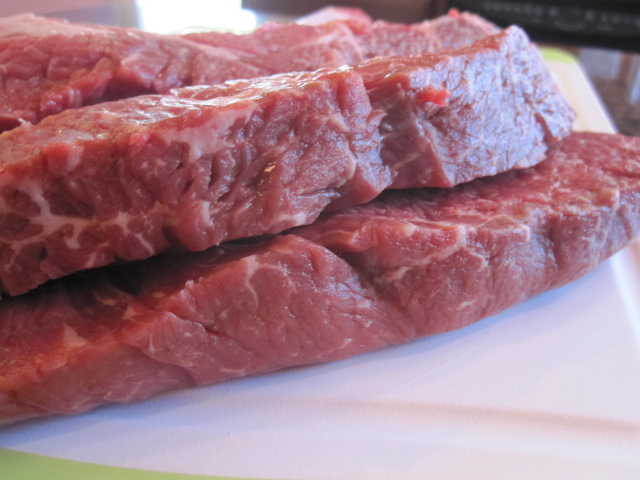 Kokkinisto (Reddened)
Adapted from Food From Many Greek Kitchens by Tessa Kiros
Serves 4-6
Tessa says, "This is called Reddened because, quite simply, the meat is cooked in a tomato sauce.  Simple meats like this with tomato, and the lemonato on the opposite page, are very popular standard food in Greece.  They would be served with some pasta on the side, or with french fries, which I love.  The fries in Greece often get an unusual sprinkling of cheese, which is wonderful and casual."
6 tablespoons olive oil
6 (9-ounce) slices beef for stewing (I used a 4lb. chuck roast)
salt
1 large red onion, chopped
1/2 cup red wine
14 ounce can crushed tomatoes
1 tablespoon tomato paste
1/4 - 1/2 teaspoons ground cinnamon (I used about 1/4 teaspoon)
2 tablespoons chopped Italian parsley
freshly ground black pepper
3 thyme sprigs
Preheat the oven to 350F.  Heat 3 tablespoons of olive oil in a large Dutch oven and fry the beef until deep golden on both sides.  Salt each side as it's done.  Remove the beef and set aside.  Add the rest of the olive oil (3 tablespoons) and saute the onion until softened.  Add the wine and cook until it has almost evaporated.  Add the crushed tomatoes and the paste, the cinnamon and parsley, and season with a little salt and black pepper.  Bring to a boil and simmer for a few minutes, smoothing out any big bits of tomato with a wooden spoon.  Scrape over the beef.  Fill the tomato can with water and add this to the pot. Add the thyme, cover with the lid and bake for about 2 hours, turning the meat a couple of times.  Add an extra 1/2 cup of water, then bake for 30 minutes more.  At the end of this time, the beef should be very tender and the sauce thick and jammy but abundant.  If necessary, add a little hot water toward the end.  Remove from the oven and serve.

Note:  I cooked my roast for 2 hours covered and realized that the sauce wasn't getting as jammy as I'd like it to.  I removed the lid and cooked it for at least another hour and the sauce did achieve a jam-like consistency.  Next time I might cook the roast uncovered for the entire time and see what happens. 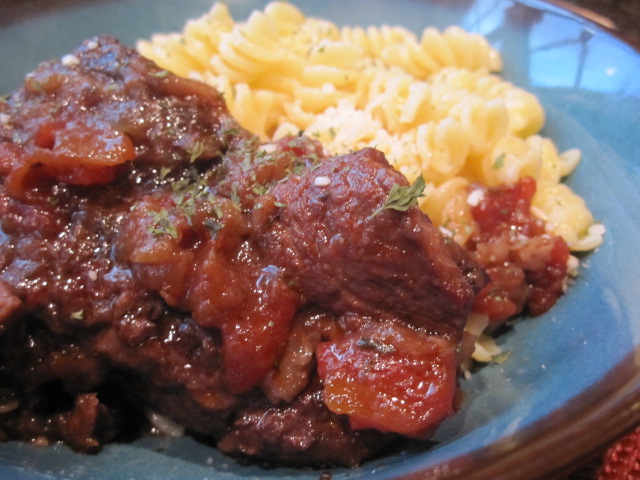