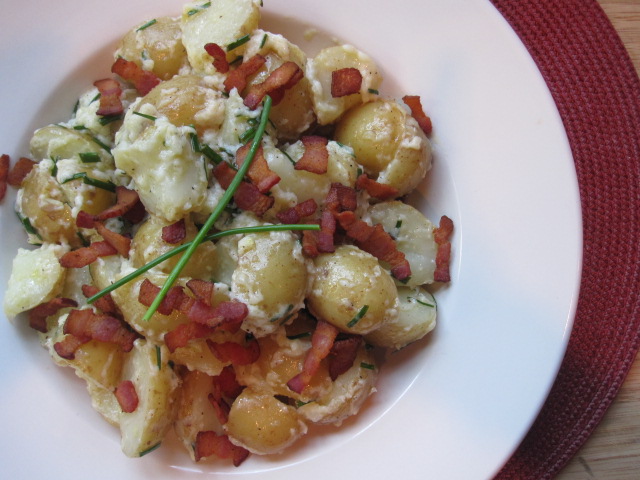 A quickie post to share Jamie Oliver's Evolution Potato Salad with you, just in time for the holiday weekend.  Jamie's recipe is rather free form in that he gives several variations of potato salad ranging from a potato salad with a light dressing to a potato salad that is decked out with herbs, yogurt, and bacon.  In true form, I chose the decked out version.  What can I say?  I'm not really a minimalist....at least not when it comes to food.
Evolution Potato Salad
Adapted from Jamie's Food Revolution
Serves 4
1-3/4 pounds baby potatoes
6 tablespoons extra virgin olive oil
2 tablespoons of lemon juice, reserve lemon for zest
sea salt and freshly ground black pepper
small bunch of fresh chives
zest of 1 lemon *see above
1/4 cup yogurt
2-3 slices of bacon or pancetta
Bring a pan of salted water to a boil.  Peel 1-3/4 pounds of baby potatoes, if you like, or leave them unpeeled, chopping any larger ones in half; leaving the smaller ones whole.  When the water is boiling, add the potatoes to the pan and bring back to a boil for about 10-15 minutes, depending on the size of your potatoes.  Test them with the point of a knife to make sure they're cooked through.  As soon as they're ready, drain them well in a colander and put them into a bowl.  The trick is to dress the potatoes while they are still hot - mix 6 tablespoons of extra virgin olive oil and 2 tablespoons of lemon juice in a bowl.  Season with sea salt and freshly ground black pepper and stir well.  Toss the hot potatoes in the dressing.  Serve right away, as it is, or move on to the next steps...
Finely chop a small bunch of fresh chives and sprinkle them over the potatoes.  Toss well before serving.
Toss the dressed potato salad and chives with the zest of 1 lemon and 1/4 cup of yogurt.
Put a frying pan on the heat and add a splash of olive oil.  Thinly cut slices of smoked bacon or pancetta into small pieces and add to the pan.  Toss and cook for 2-3 minutes, or until the bacon is crispy and golden.  Remove from the heat.  Sprinkle over your potato salad and serve.

Notes/Results: We really enjoyed this potato salad.  It was quite tangy from the addition of the yogurt and the lemon, making it different than your standard potato salad.  I still prefer the traditional potato salad, but I would definitely eat this one again.

I hope everyone is having a great holiday weekend! I am on vacation visiting my family in Ohio and will be taking a short break from blogging this week.  (I accidentally left my camera with all my pictures on it at home).  Have a great week!
Posted by Kim at 11:07 PM