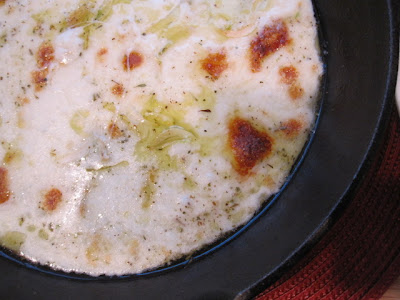 The first recipe that screamed to me from the pages of Ina Garten's How Easy is That?, was her Baked Fontina.  I was seduced by the gloriously melted cheese and had to have it. 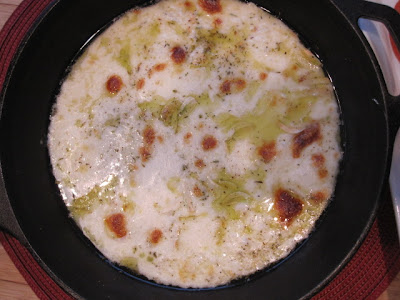 Preheat the broiler and position the oven rack 5 inches from the heat.

Distribute the cubes of Fontina (or mozzarella in my case) evenly in a 12-inch cast-iron pan.  Drizzle on the olive oil.  Combine the garlic, thyme, and rosemary and sprinkle it over the cheese and olive oil.  Sprinkle with the salt and pepper and place the pan under the broiler for 6 minutes, until the cheese is melted and bubbling and starts to brown.

Serve the baked Fontina (mozzarella) family-style - right out of the oven in the cast-iron pan with crusty chunks of bread for everyone to dip.

Notes/Results:  Ina recommended the Fontina Val d'Aosta, so I hightailed it to the city and bought roughly 1/2 pound ($11 for just 1/2 pound).  A couple of days later, I went to make this and opened up my package of Fontina Val d'Aosta.  The smell of the cheese was extremely offensive - extremely! It was so bad that I had to wrap it up and take it outside immediately.  I bought the Fontina from a reputable store, but somewhere along the line the cheese had definitely gone bad.  I had my heart set on a glorious pot of melted cheese, so I took out some fresh mozzarella and went ahead with the recipe.  I'm sure Ina's recommendation for the Fontina Val d'Aosta is fabulous, and I'll definitely give it another try, but the fresh mozzarella worked wonderfully too! I think you could easily adapt this one to use a lot of different cheeses.  I served my Baked Mozzarella with some chunky bread and sliced pepperoni.  Lips were smacking, mouths were happy, and all was fabulous!


Special Note:  If anyone has had Fontina Val d'Aosta, I'd love to hear about it.  I'm sure it's a wonderful cheese and am convinced I just bought a bad piece.