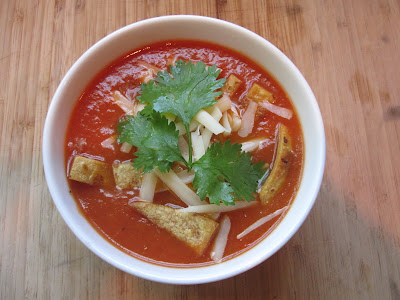 My blogging buddy Heather, of Girlichef, is in love with Tortilla Soup! Heather loves Tortilla Soup so much that she announced she would be trying lots of new Tortilla Soup recipes over the course of a year and requested everyone to join in and do the same. Tortilla soup is pretty tasty, so I decided to jump on board. I found several Tortilla Soup recipes that I wanted to try, so I opted for a Tortilla Soup Throwdown. We're lightening things up in the Stirring the Pot kitchen and Tortilla Soup fits right into our menu plan. Not only does it taste great, but it's some pretty healthy stuff too!

I chose two different styles of soup. The first recipe has a smooth consistency with toppings and the second recipe is more of a chunky-based soup with lots of texture. I did this on purpose because I wanted to see which one my family preferred best. It was basically smooth vs. chunky.

First up is Ellie Krieger's Tomato-Tortilla Soup from her first book, The Food You Crave. Ellie's soup is a blend of canned diced tomatoes, jalapeno, chicken broth, onion, garlic, cumin and quite a bit of lime juice. The soup is blended for a smooth consistency. Corn tortillas are brushed with a bit of canola oil and baked until crisp and used to garnish the soup, along with sour cream and cilantro. Ellie's soup makes 4 servings and comes in at 270 calories, including garnishes. The recipe can be found HERE online at Food Network. 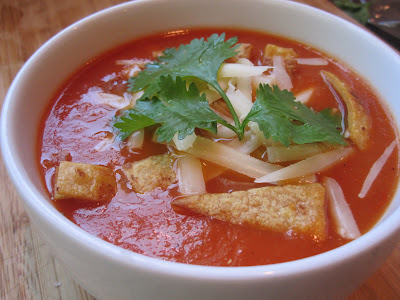 The finished product was a very well-balanced soup which was very well-received by everyone. The lime juice really stands out and the jalapeno gives the soup the perfect amount of heat. I topped the soup with the baked corn tortillas, cheese, and cilantro BUT you could literally top it with all kinds of things: avocado, chicken, maybe some more jalapeno? 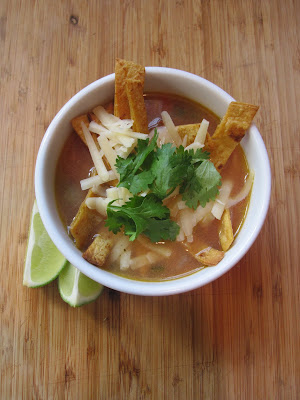 The second recipe is more of a traditional recipe and can be found on the Eating Well website, HERE. This tortilla soup was more of a broth-based soup with lots of diced poblano peppers, onion, a can of diced tomatoes with green chiles, boneless skinless chicken thighs, cumin, and lime juice. This recipe also called for the corn tortillas to be baked as well, which cuts down on the calories quite a bit. A completely different take on tortilla soup, this one packed quite a bit more heat than Ellie's version. I usually find poblano peppers to be pretty mild, but the ones I used in this recipe were really packing some heat. This recipe was filled with all kinds of texture and was very satisfying, filling and comforting. Everyone liked the addition of the chicken and thought it was more of a meal-based recipe. 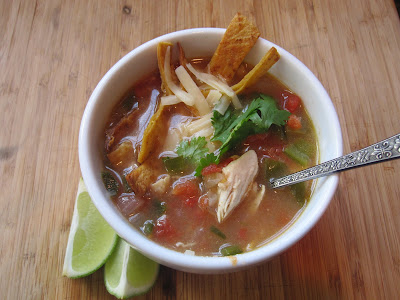 Why?
I think the tomato based version of Ellie's Tomato-Tortilla Soup was more flavorful. It was a very bright soup with the addition of 1/4 cup lime juice. Ellie's soup was so well-balanced and was just a pleasure to eat. It was preferred by everyone across the board and disappeared very quickly. In addition, everyone liked the idea of topping their soup with whatever their heart's desired. Chicken, cheese, avocado, chorizo, rice, anything would be great on top of this soup. I highly recommend it!

The Eating Well recipe was a great recipe but packed a little too much heat for some, good for the adults, not so great for the kids. It was a good solid recipe, but didn't disappear anywhere near as fast as Ellie's soup. Also, I noticed afterwards that it didn't contain any garlic! What the heck? We can't have soup without garlic, right?

Either way, I've come to the conclusion that the lime juice is the key to some very tasty tortilla soup! 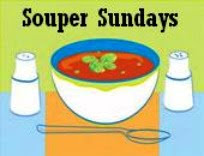 I am submitting both recipes to my friend Deb at Kahakai Kitchen for her Souper Sundays roundup. Every Sunday Deb features a wonderful roundup of tasty soups, sandwiches and salads. 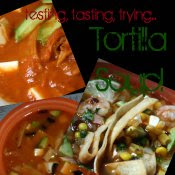 I am also submitting this to my flavor-loving friend, Heather, of Girlichef, for her Tortilla Soup Challenge.

Heather has a 4 spoon rating system for the Tortilla Soup Challenge, with 4 spoons being the best rating.

I'm giving the Eating Well recipe 2 spoons. A good solid recipe, which I would eat again.

I'm giving Ellie's recipe 3 spoons which means that it is a recipe worth getting excited about! I even emailed a few people to tell them about it :0)

If you would like information about joining up with Heather's Tortilla Soup Challenge, click HERE to read about it!
Posted by Kim at 8:03 PM