Popsicle of the Week: Choco-Coco Pops 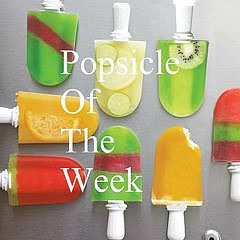 Popsicle of the Week is going to be a new feature here at Stirring the Pot. As a family, we LOVE popsicles. We eat them all year round, but can really go through them in the summertime. Awhile back I bought two cookbooks dedicated entirely to popsicles and bookmarked almost every recipe in each book. In an effort to cook my way through these two books, I will be featuring a new popsicle recipe each week! I'm hoping we will find some new family favorites!

There are many popsicle molds for sale and there is even a new kitchen appliance for sale called the Zoku Quick Pop Maker ($49.95 @ Williams Sonoma). The Zoku is a fun product that is getting rave reviews for making popsicles in a mere 7 minutes. I'm really looking forward to getting one of these in the next few weeks, but for now I have a few different popsicle molds that I can use. 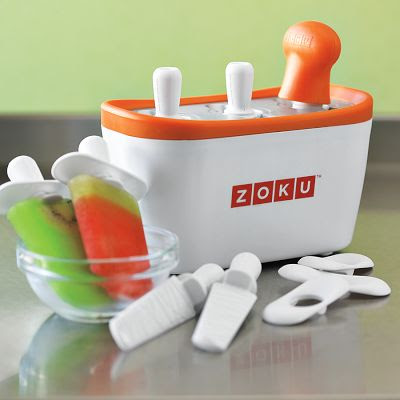 For these Choco-Coco Pops, I used these Mickey Mouse Popsicle Molds by Tupperware. There are six plastic molds and each mold holds around 2.5 - 3 ounces of liquid. This is a perfect size for children, but a bigger mold would be nicer for adults. Sometimes it can be difficult to get the popsicle to release from it's mold, but these Tupperware molds released very easily.

I've collected popsicle molds over the years, but you really don't need any special equipment. You can make popsicles from everyday household items such as muffin tins, cupcake liners, paper cups, shot glasses, and juice glasses. Paper cups are especially nice because there is no fooling around with a mold, trying to get the popsicle to release itself. If using paper, you can simply tear the paper away and have at it. Wooden popsicle sticks are widely available everywhere, namely at places like Hobby Lobby and/or Michael's. I have even seen people use straws, cocktail stirrers, cocktail picks, bamboo skewers, lollypop sticks, chopsticks, plastic spoons, plastic toys, pretzel rods, chocolate rolled wafer cookies, biscotti, and cinnamon sticks as popsicle holders. 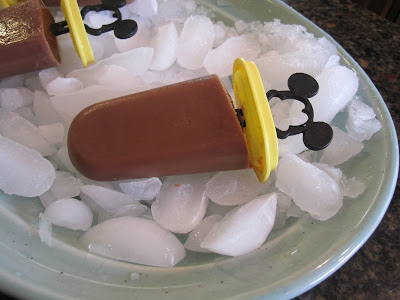 Today I made Ellie Krieger's Choco-Coco Pops from her new book, So Easy. The recipe is a mixture of one can lite coconut milk, 3 ounces dark chocolate, sugar, and vanilla. The mixture is cooked on the stovetop until the chocolate melts and the mixture is thickened. Once it has cooled, it is poured into popsicle molds and chilled for four hours. They were extremely tasty and are going fast, even on a cold and gloomy day like today! 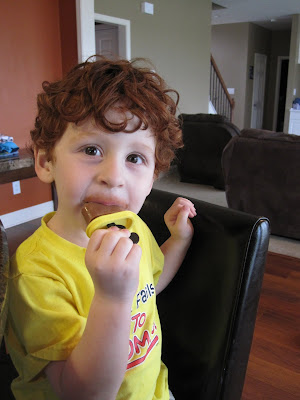 I have two cookbooks that I will be using for Popsicle of the Week. The first is called Pops! Icy Treats for Everyone by Krystina Castella ($11.48 Barnes and Noble). This book has chapters on Healthy Energy Pops, Fruit Juice Pops, Soda Fountain Pops, Cream and Pudding Pops, Coffee and Tea Pops, and Cocktail Pops. I think that this book is more for the adults and has some really nice, unique, and creative recipes.

The second cookbook, my favorite of the two, and the most family-friendly, is called Ice Pops "Recipes for Fresh and Flavorful Frozen Treats" by Shelly Kaldunski. I found my copy at Williams-Sonoma, but so far it is not available online at Williams-Sonoma, Amazon, or Barnes and Noble. I think it was just released and should become available shortly. This book is basic, easy, and has fantastic recipes for both children and adults. There are chapters for Fruity Ice Pops, Chocolate Ice Pops, Creamy Ice Pops, New Flavors for Ice Pops, and another chapter on Creative Shapes for Ice Pops. 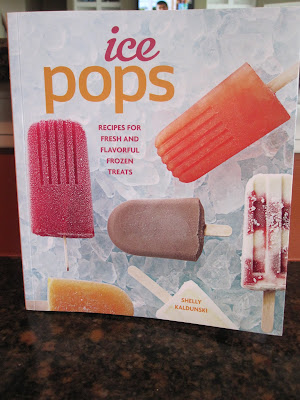 Stay tuned.....there is going to be a fantastic giveaway for Shelly Kaldunski's Ice Pops Cookbook!