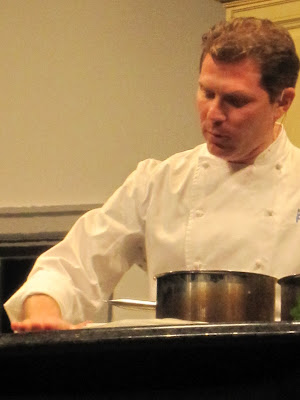 Last month I got the chance to see Bobby Flay in person at the Incredible Food Show here in Lexington, KY. Bobby was so charming and full of jokes and laughter. I noticed very quickly that he enjoyed teasing the audience. You can tell that he enjoys good fun and laughter and I think this is why his Food Network show Throwdown suits him so well.

For those of you who do not know, Throwdown is a great show where Bobby is on a "secret mission" to challenge absolute masters in different kinds of cooking. In each show, the cook thinks the Food Network is shooting their dish for a special show. What they don't know is that Bobby is going to show up and surprise them with a cook-off. Surprisingly, Bobby doesn't always win. A lot of times the decision comes down to whether or not the judges prefer the "traditional dish", usually made by the cook OR "Bobby's spiced up version". You never really know in whose favor the judges will decide.

I love the idea of having a throwdown in my own kitchen and deciding which dish we like better. In preparation for the holidays, I have decided to start with pecans first. Candied or spiced pecans make a quick and easy holiday appetizer and everyone usually loves them. In the spirit of the Food Network show, I have picked a traditional recipe and a non-traditional recipe. Both recipes were easy and took the same amount of time and effort.

Paula's version is the more traditional version, made with sugar, cinnamon, evaporated milk, and vanilla. These are your traditional version of holiday pecans that you might get at the mall, in a holiday package, or from a friend. They taste almost like a praline. 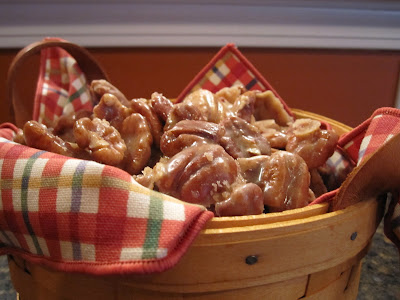 Nigella's version is the more non-traditional recipe, made with butter, maple syrup, salt, and cayenne pepper. I loved the idea of using maple syrup and adding cayenne pepper. My husband and I love spicy foods and were really looking forward to trying these. My picture of Nigella's pecans didn't turn out to well, but you could see little specks of cayenne pepper running over the pecans - YUM! 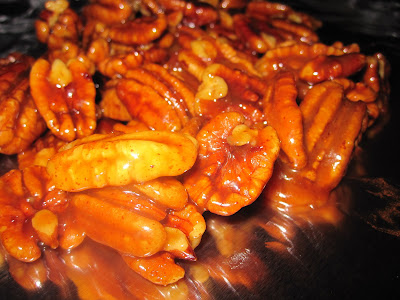 Notes/Results: I was actually surprised by the vote for Paula's pecans. Dare I say that I prefer Nigella's recipes to Paula's any day of the week. Nigella's recipe also had two ingredients that I love: maple syrup and cayenne. Prior to making both pecans, I was convinced I would like Nigella's better. Nigella's pecans were a little more savory with just a hint of heat. I ate a couple and then set them aside. Paula's pecans were sweet and cinnamony and tasted just like those yummy pecans you get during the holidays in the mall. They were delicious and I couldn't stop eating them. I was addicted! I took them to a bunco game and they went over very well.

Combine the sugar, cinnamon, and milk in a medium-size saucepan. Bring to a boil and cook to the soft-ball stage (234-238 degrees on a candy thermometer). Add the pecans and vanilla and stir well. Using a slotted spoon, drop single pecans on a sheet of waxed paper; allow to cool.

Nigella's recipe can be found here, on the food network.

I think there will be more throwdowns in my future!
Posted by Kim at 7:42 AM