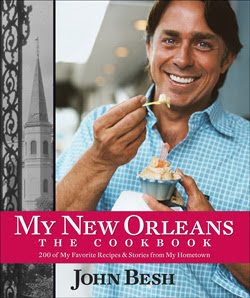 A couple weeks ago, I won the most beautiful cookbook ever, My New Orleans: The Cookbook from my friend Deb at Kahakai Kitchen. I had spent lots of time at the bookstore looking through this fabulous book and wanted it passionately. This is easily the most beautiful cookbook in my collection, thanks Deb!! The book is huge, a real coffee table book, and full of pictures, traditions, and stories. John Besh shares his love for New Orleans and emphasizes using local ingredients and supporting his community.

For years I have wanted to go to New Orleans. It has been at the very top of my list of cities to visit forever. New Orleans is appealing to me for many reasons: culture, beauty, music, food, and also because my Mom lived there as a teenager. I was in New Orleans as a toddler and the only thing I remember is going up and down the stairs to my Grandfather's house while my Mom told me "watch out for the alligators". Having a toddler now, I can understand why both the stairs and alligators stuck with me. Don't all kids have a natural obsession with stairs and alligators?

Four years ago, the city was hit by Katrina. I remember it well because it happened the night before my 30th birthday. Prior to the tragedy, I had been busy having a colossal fit over turning 30. A few hours later I considered myself lucky to be turning 30. What a horrible tragedy and I couldn't believe the horror that unfolded on the TV. I prayed that the city would rebuild itself and this book gives me hope that it is. I can't wait to go there one day and gorge on food, music, and scenery.

The first dish I made was Red Beans and Rice. It looked so delicious on Deb's site and I knew it would be the first thing I made from the book. John Besh uses bacon fat, a one pound bag of kidney beans, the holy trinity(bell pepper, celery, and onion), and two ham hocks. I had trouble finding regular ham hocks, so I had to use country ham hocks which ended up being a delicious substitution. The end result was smoky, slightly spicy, and very meaty. A delicious and filling bean dish that most everyone would approve of. It was great served over the Basic Louisiana White Rice and satisfied my craving for comfort food. 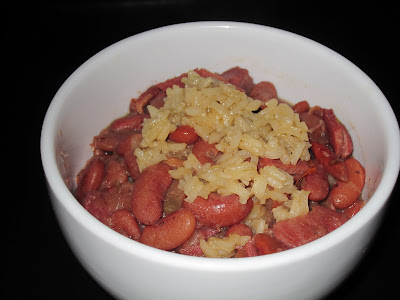 I thought of making John's cornbread recipe, but couldn't stop thinking about the recipe for his Grandmother Walters's Biscuits. John says he believes the secret to his Grandmother's biscuits was the fact that she talked to them, willing them to rise. John himself likes to use european-style high-fat butter which has less water and therefore looks and tastes better. I used plain old butter and I think they turned out fabulous! I think the secret is in turning the biscuits and folding them over, creating those flaky layers. Also, when the biscuits were allowed to rest for 30 minutes, they rose on the countertop and become fluffy. They were the best biscuits and I will be making them a lot! They are so good that I have to share the recipe with you. 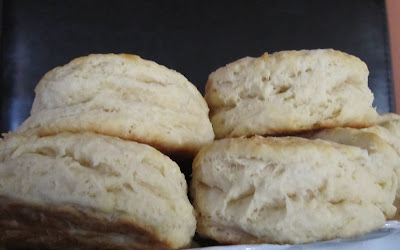 Preheat the oven to 425F. Sift the flour, baking powder, sugar, and salt into a mixing bowl. Using a fork or pastry cutter, cut the butter into the flour until it resembles cornmeal. Add the milk, stirring until the dough just comes together to form a ball.

Being careful not to overwork the dough, roll it out until it is 3/4 to 1 inch thick. Cut dough into biscuits using whatever cutter you like. Grandmother used an inverted juice glass, which was really an old preserves jar. For more biscuits, use a smaller glass.

Place the biscuits on a cookie sheet and bake until uniformly golden brown, 10-14 minutes. 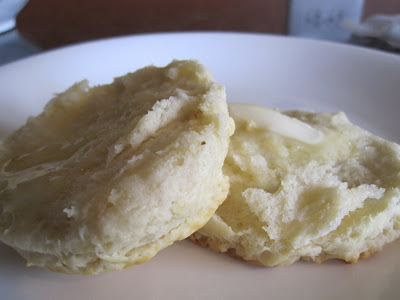 My husband had been been gone all week working in North Carolina, so I decided a homecoming dinner was in order. I made the Basic Creole Spices to use on a steak. The spices consisted of celery salt, sweet paprika, coarse sea salt, freshly ground black pepper, garlic powder, onion powder, cayenne pepper, and allspice. It was a unique blend, very different from Cajun spices used to "blacken" foods. I rubbed the spice into the steak and seared them well. The spice resulted in a very zesty steak with a hint of heat from the cayenne. 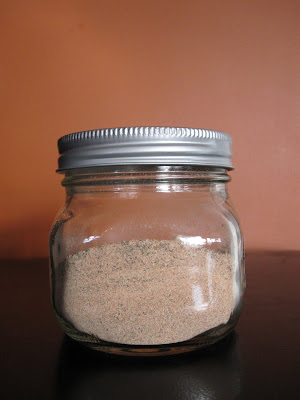 My husband's eyes lit up when he came in and saw this meal on the table. It was a real delight!! 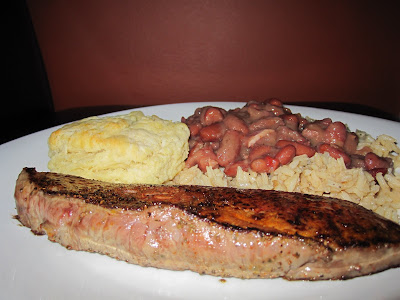 Thanks to Deb over at Kahakai Kitchen for having such a wonderful contest and sending me such a beautiful cookbook to add to my collection. I'm looking forward to cooking and sharing many more recipes from this terrific cookbook.

If you are curious and want to know more about this cookbook, click here to view Deb's review of this book.
Posted by Kim at 7:56 AM