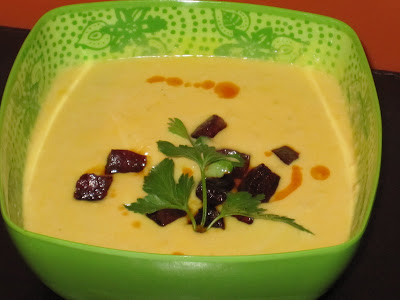 I took a rather long break cooking from Tyler's Stirring the Pot this summer. I tried many recipes from Tyler's Dinner at My Place book, joined up with the My Girl Paula group, tried my hand at cooking and baking with greek yogurt, and enjoyed some creative cooking using ingredients on hand.

This fall I'm going to change it up a little bit. I plan on featuring some Halloween recipes and ideas, as well as many other seasonal recipes. I also have a lot of soups coming up to share with my friends at Souper Sundays. I finally received my copy of Carmine's Family-Style Cooking and am excited to say I will be cooking and featuring some great Italian recipes from their book. I also plan on cooking from Stirring the Pot, as well as many other Tyler recipes for Tyler Florence Fridays. And, last but not least, I have stocked up on butter so that I can cook with the girls at My Girl Paula every Monday.

This week, I made Tyler's Corn Chowder with Chorizo from Stirring the Pot. Tyler's includes Fried Hog Island Oysters with his soup, but I couldn't find oysters anywhere around town, so I had to leave them out. I was very excited to actually find some Spanish style chorizo to include with this soup. I even got to chose between the regular version of Spanish chorizo and a spicy version. I totally chose spicy!!

In a large pot heat milk and cream over low heat. Add corn, garlic, and thyme. Bring to a boil; simmer for 5 minutes. Cover and shut off heat to allow the milk to steep with the corn. Once steeped (about 15 minutes), cut the corn off the cobs. Strain the milk mixture with a fine sieve and transfer to a blender. Add the corn to the strained milk and puree. Season to taste with salt and pepper. Keep warm. In a skillet cook chorizo and a 2-count of olive oil (about 2 tbsp) over low heat for 2-3 minutes to render fat and infuse the oil.

Serve corn chowder topped with chorizo, a splash of infused chorizo oil, a fried oyster (if you have it, and parsley.

Notes: I loved this chowder and have become a big fan of it. My chowder was not super thick, but had a very nice consistency. I found the chowder perfectly creamy, with little bits of corn throughout (even though blended) and a slightly sweet taste. I enjoyed the chowder both plain and with chorizo and liked it both ways, depending on my mood. Tyler's recipe states that this makes 4 servings, but this actually makes a ton of soup and could feed an army. The spanish chorizo definitely adds a great amount of flavor and is worth searching out. It was rather pricey here and cost $9.99 for two links. It's not something I would buy all the time, but I wanted to try the spicy version and I knew hubby would enjoy it. I would make this again, and probably will this fall. I read online that many people love Tyler's version of corn chowder and make it a part of their Thanksgiving table. I agree and think this would be a great addition to any Thanksgiving table. It is a perfectly comforting soup!


This is my submission for Tyler Florence Fridays and also Souper Sundays! Both are great groups of people who pick a recipe of their own choosing to share each week.
Posted by Kim at 8:04 AM