It's fair season and everyone loves to cruise the midway at their local fair for some good eats!

Now we all know that fair food gets a bad rap because of dishes like deep-fried Oreos, but I'm about to give the fair some major props. Did you know that the World's Fair in 1904 inspired lots of our favorite dishes?  They needed to make food more portable for the fair-goers so they invented ice cream cones, hamburger buns, and hot dogs buns! Who knew the World's Fair was such an inventive place?

We have to give credit where credit is due and I will tell you, I was inspired by the need for portability at the 1904 World's Fair. I chose a dish called Greek Nachos with Feta Drizzle from Mark Bittman's The Food Matters Cookbook. Bittman says this is a portable way to eat salad, which ticks two boxes for me since it is both a healthy dish and a dish that fits this week's IHCC theme.

Plus, who doesn't love nachos, of any kind? Bittman's version of Greek Nachos calls for a Feta Drizzle made with: feta, yogurt, lemon juice/zest, olive oil, and mint, blended until smooth. I loved the feta drizzle (I love anything feta), but I also think a tahini sauce would be great! I wanted to keep my version light and healthy so I topped my homemade pita nachos with tomatoes, cucumbers, red onion, sliced black olives, and sauteed chickpeas. I also love the idea of adding some seasoned ground lamb to the dish.

I really love dishes like this because they please everyone! Chop up tons of veggies, make a couple sauces, have a vegetarian option with chickpeas and some seasoned ground lamb for the meat eaters. Everyone gets to customize their own meal and everyone walks away happy! Nachos for world peace! Nachos for the World's Fair! Nachos for everyone! 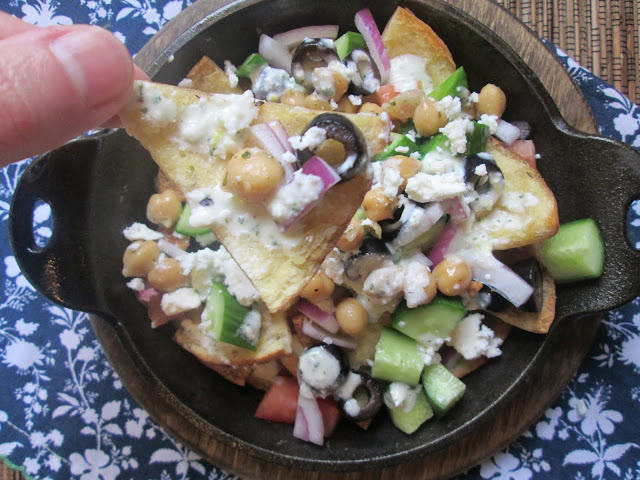 Adapted from The Food Matters Cookbook

4 pitas, split and cut into wedges

Grated zest and juice of 1 lemon

Notes: Adapt this recipe to your tastes. I added canned and drained chickpeas that I sauteed with some spices in a little bit of oil. You could add any other veggie, herb, spice, or meat to the dish! Skies the limit.

Heat the oven to 350F. Arrange the pita wedges in one layer on baking sheets and brush or drizzle with oil if you like. Bake, turning as needed, until they begin to color, about 10 minutes. Sprinkle with salt, turn off the oven, and put the chips back in the oven to keep warm.

Combine the feta, yogurt, 1/4 cup oil, mint, and lemon zest and juice in a food processor; sprinkle with salt and pepper. Process until smooth (or use a for to combine the ingredients in a bowl).

Put the chips on a serving plate (or use the baking sheets). Top with the tomatoes, cucumber, olives, red onion and drizzle with the feta-yogurt sauce. 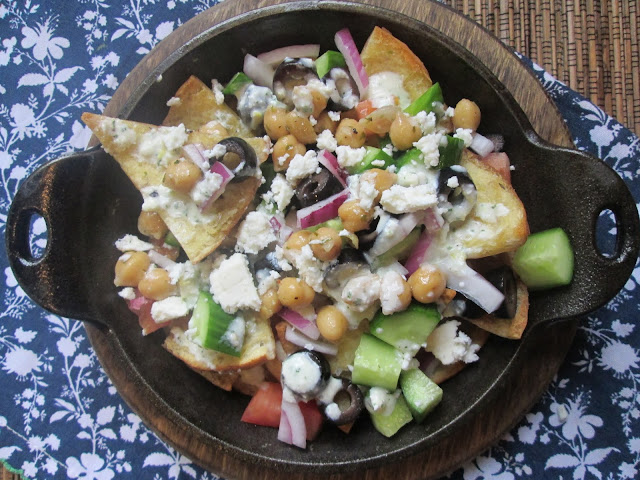