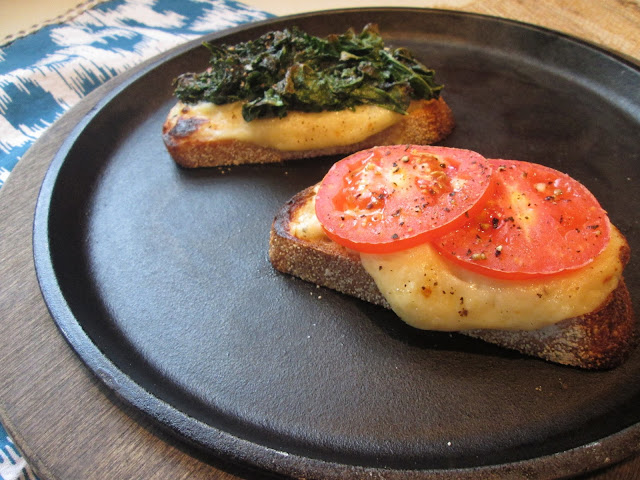 Oftentimes, when I'm out for drinks, I find myself craving a little something cheesy. Nothing too heavy, but something with a little bit of heft to it, and usually a little naughty. This Welsh Rarebit is just the thing. Cheese, glorious bubbly melted cheese, served over toasty hearty bread and maybe even some veggies. It's just a thing of beauty, really.

Hugh shares three ways to add veggies and change up your rarebit: tomatoes, celery, and kale or broccolini. All of these are good choice, but I'm willing to go out on a limb and say you could easily use about anything hanging out in your fridge. Eggs of any kind, cooked peppers (bell or jalapeno), bits of meat, slices of apple or pear, spinach, artichokes, and even olives would be lovely. The sky is really the limit! Always feel free to make it your own!

This time around I opted to follow two of Hugh's recipes, tomato and kale. While I do believe that tomato is the most common, and also the most well-liked; I'm willing to say that I love the combo of greens with cheese way more than the tomato version. Either way you simply cannot go wrong.

There a couple of things worth nothing. First, use a really good English Cheddar. I used an English Cheddar straight from Dorset.  Next, do not worry when the butter, flour, and milk mixture resembles glue, or straight up paste. This is exactly what you want! When you add the cheese to the mixture you will have to use a lot of muscle to stir it into the "sauce" and get it to melt. The cheese sauce isn't going to seem very saucy when you spread it on the bread and that is exactly the texture you're going for! Don't worry, this is a thick and luscious sauce that is so dreamy and satisfying!  Slather it on some good toasted bread and enjoy as is or with veggies, bits of meat, and/or egg. This Welsh Rarebit is a real treat! 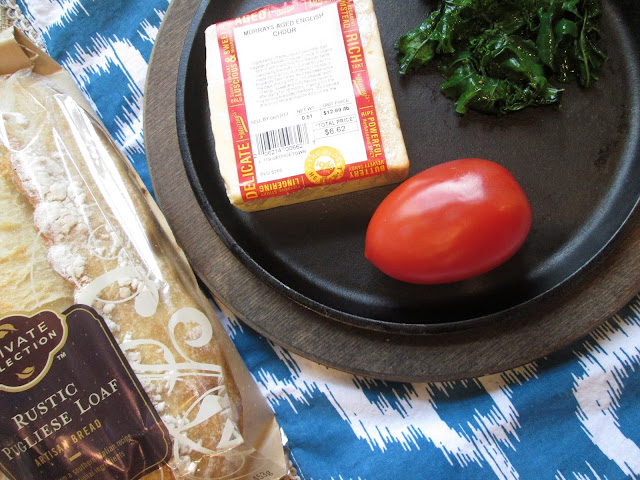 Put the milk in a saucepan, with the bay leaf and onion if you have them on hand, along with a grinding of black pepper. Bring the milk to just below a simmer, then turn off the heat.

Melt the butter in another saucepan over medium-low heat. Stir in the flour to make a smooth roux and let it bubble and seethe for a couple of minutes. Remove from the heat. If you've infused the milk with bay and onion, strain them out. Add the milk to the roux in three or four batches, beating well after each addition to create a smooth sauce.

Return the thick sauce to low heat and cook for another 2 minutes. Turn off the heat and stir in in the cheese until melted, then add the mustard and season with salt and pepper to taste, adding a dash of Worcestershire sauce if you like.

Preheat the broiler and toast the bread. If you're serving rarebit just as it comes, then spread the cheese sauce thickly on the toast. Alternatively, add your veggie extras before spreading on the toast.  Either way, broil the rarebit reasonably slowly, not too close to the heat, so the thick sauce is bubbling hot all the way through before the top gets too brown. Serve right away.

Tomato Rarebit: Top the cheese sauce with a few thick slices of tomato and sprinkle with pepper before placing under the broiler

Celery Rarebit: Thinly slice 4 celery stalks and saute them in a tablespoon of butter for 5 minutes, until tender but still a bit crunchy.  Season and stir into the rarebit mixture before spreading on toast and broiling.

Broccolini or Kale Rarebit: Lay some lightly cooked broccolini or kale across your toast before smothering with cheese sauce and broiling. 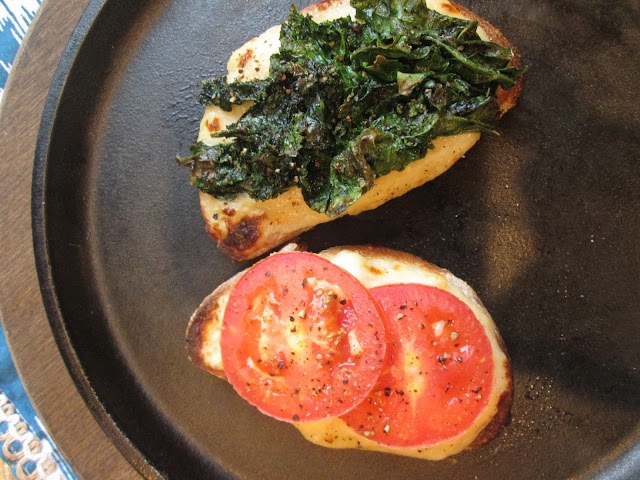