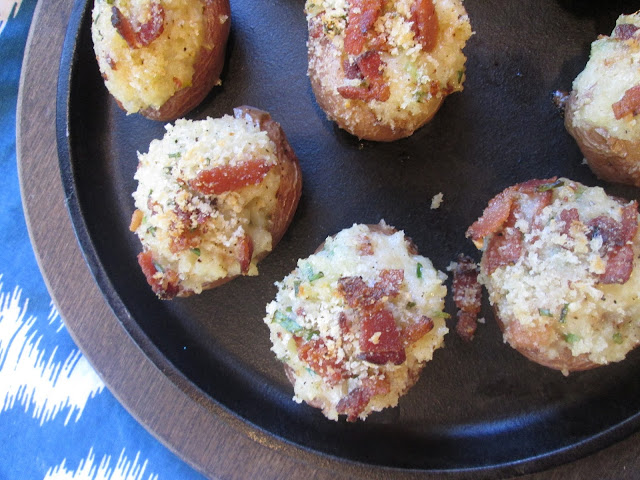 Twice-baked potatoes were so popular back in the 80's. My mom made them for dinner quite often and they were the side dish at the two steakhouses in town. Then, all of a sudden they disappeared and became somewhat forgotten. I suppose they fell out of favor because they were time-consuming and slightly fussy, or maybe it was the calorie craze of the 90's. Of course, if you ask me, it was also right around this time that things became all about being fast. Microwave meals, boxed meals, and woks became the thing. Everyone was talking about how fast they could make their meals in the microwave or how fast they could throw together a stir fry. The dreaded convenience factor....and well, it's pretty much been the same way ever since.

I have to admit that I fall into the same trap. Even though I love to cook, I convince myself that I don't have time to spend the whole day in the kitchen. Truth is, I know full well that we make time for the things we want to do. So today I did just that. I made something that has been on my list forever...these cute little mini twice-baked potatoes.

Not only were they heavenly, but everyone was very pleased with the cute little package on their plate. My daughter said, "I love these. This reminds me of the kind of food you used to cook before you started working." Her comment made me smile because she hit the nail on the head.  I told her "Grandma used to make these for dinner all the time when I was little, but you're right....she did that before she started working. Once she started working she rarely made things like that anymore."

We had a really good Sunday dinner, but the whole thing left me feeling kind of sad. We get so caught up in doing, going, and running that we let life pass us by. Why do we feel so guilty when we can't get to everything? Why can't we make time to read a book or spend a day in the kitchen?

So, yes, maybe I didn't get to store or finish all the laundry today and you know what? No one will notice. But, I did manage to make these absolutely delicious twice-baked potatoes that made my daughter's eyes light up and I'm gonna call that a win.

Do yourself a favor and waste the day away in the kitchen. Make something time-consuming and fabulous and serve these cute little mini twice-baked potatoes on the side. I guarantee you won't regret it! 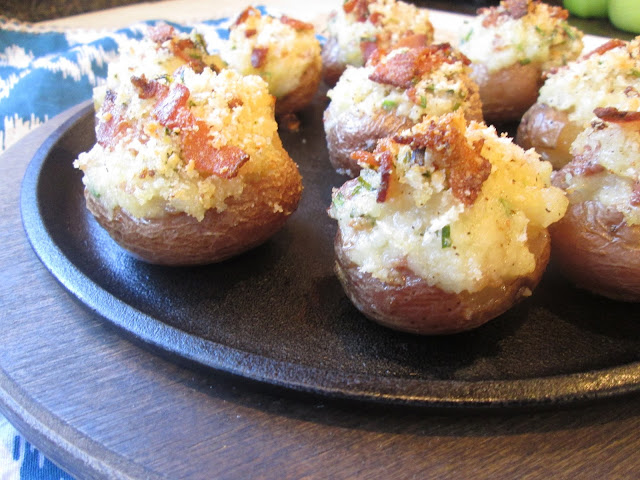 Preheat the oven to 375F.  Place the potatoes on a rimmed baking sheet and toss with the olive oil and sprinkle with salt. Bake until a knife inserted into the potatoes goes in with little to no resistance, about 30 to 40 minutes (of course this depends on the size of your potatoes - mine were 3 to 4 bites big).

In a medium skillet, cook the bacon over medium-low heat until the fat is rendered and the bacon is crispy, about 10 minutes.  Drain well and place half of the bacon in a bowl. Add the panko, 2 tablespoons chives, and 2 tablespoons Parmesan. Mix to combine and set aside.

In another bowl, combine the sour cream, butter, heavy cream, the remaining bacon, 1/4 cup Parmesan, 2 tablespoons chives, and salt and pepper to taste.  Set aside.

When the potatoes are cool enough to handle but still warm, cut off the top third of each potato. Remove the skin from the tops.  Using a melon baller, or very small spoon, scoop out some of the insides of the cooked potatoes, leaving 1/4-inch borders around the edges. This creates little boats. Place the scooped insides and the peeled tops of the potatoes in a medium bowl and mash using a potato masher or the back of a fork. Add the reserved bacon and sour cream mixture. Using a rubber spatula, mix together the filling until well combined.  Spoon the filling back into the potato boats slightly overfilled and mounded on top. Top with a sprinkling of the panko mixture and a drizzle of olive oil. Bake until the filling is heated through and the topping is golden brown, 10 to 12 minutes.  Serve warm or at room temperature. 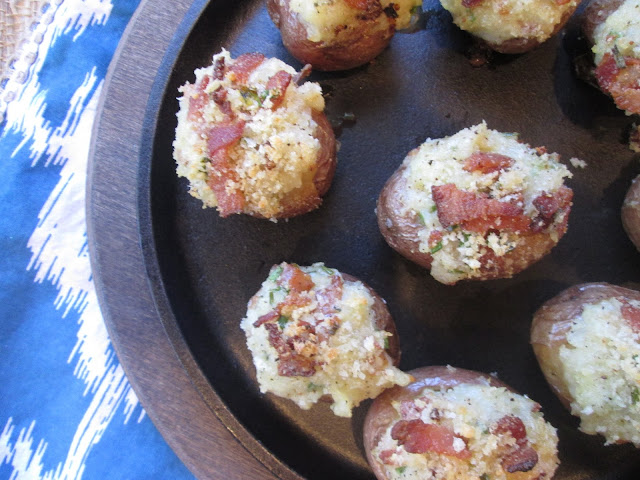