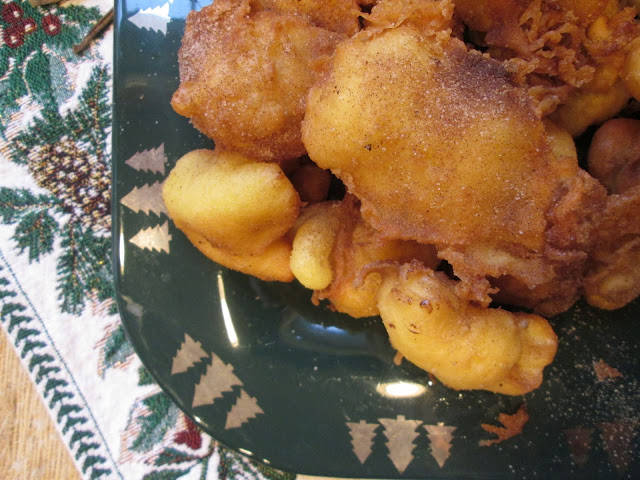 We are exactly one week from Christmas and I'm already in a sugar coma.  It's like I can't even fathom eating one more cookie, chocolate, or piece of fudge. On Friday morning at work we had donuts, danishes, sweet breads, cookies, chocolates, peanut butter balls, coconut balls, and fudge and I just couldn't even. I couldn't even take one bite!  Now this is very unlike me because I am known for my sweet tooth. This may very well have been the one and only time I passed on all of it.

Then I looked at this week's theme for I Heart Cooking Clubs and it was you guessed it....Sweet Treats. I contemplated cheating by making a fruit smoothie, a fruit salad, or maybe even a fruity cocktail. I even considered making hot chocolate for the kids. Anything I thought. Anything to keep from eating more sugar. Then I came across Giada's Zeppole recipe, which is something I've always wanted to try. I can handle that, I thought.  Plus as a bonus, I had everything on hand (you probably do too), and didn't have to venture out in the freezing weather.  Zeppole it was!

Zeppole, otherwise known as little round Italian donuts, require very little ingredients. Butter, flour, sugar, eggs, water, salt, cinnamon and oil for frying.  As I mentioned above, you probably have all of the ingredients on hand. They come together easily enough and are relatively easy to fry. Mine, because I forgot to add water to my dough (whoops), were a little unruly when they hit the oil.  They didn't turn into cute little rounds of dough. They were definitely misshapen, but the taste was still on point.

We ate these zeppole while trimming the tree (yes, I'm a little behind on decorating) and they were the perfect treat. Little fluffy rounds of dough with a very light coating of cinnamon and sugar. Much  like a donut, but definitely not as sweet. With very little sugar in the dough, and just a light touch of cinnamon and sugar sprinkled over them, they were a welcome break to all the heavy sugar laden food that December is known for. Definitely worth a try. Just remember to add the water! 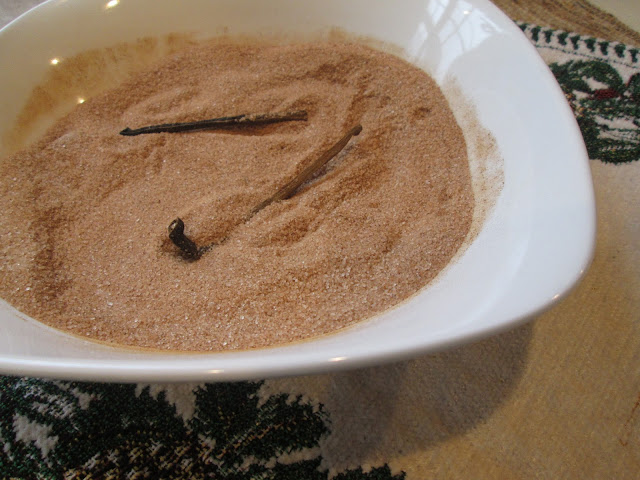 In a medium saucepan combine the butter, salt, 3 tablespoons of sugar, and water over medium heat. Bring to a boil. Take pan off the heat and stir in the flour. Return pan to the heat and stir continuously until mixture forms a ball, about 3 to 5 minutes.  Transfer the flour mixture to a medium bowl. Using an electric hand mixer on low speeds, add eggs, 1 at a time, incorporating each egg completely before adding the next. Beat until smooth. If not frying immediately, cover with plastic wrap and reserve in the refrigerator.

Meanwhile, pour enough oil into a large frying pan to reach a depth of 2 inches.  Heat the oil over medium heat until a deep fry thermometer registers 375 degrees F. Using a small ice cream scooper or 2 small spoons, carefully drop about a tablespoon of the dough into the hot olive oil, frying in batches.  Turn the zeppole once or twice, cooking until golden and puffed up, about 5 minutes. Drain on paper towels. Toss with cinnamon-sugar. Arrange on a platter and serve immediately. 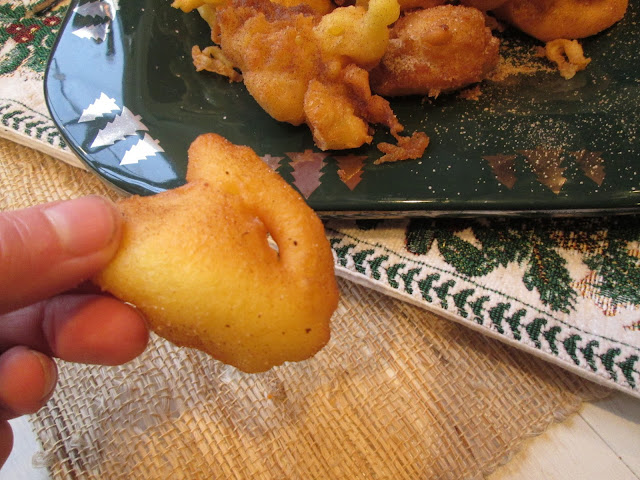 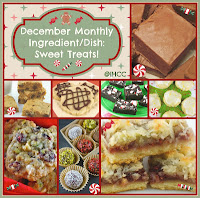