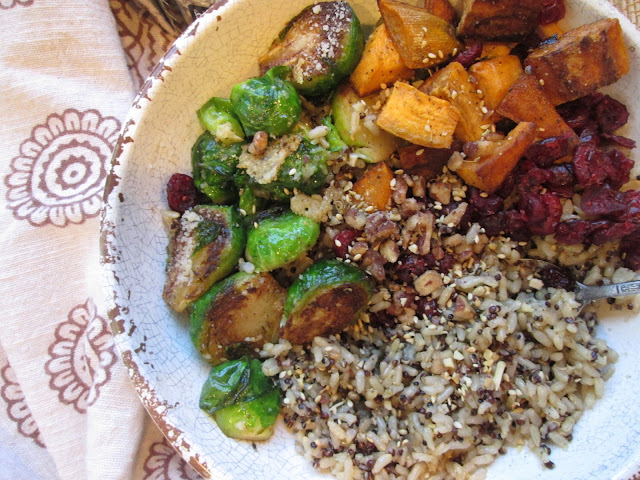 This Buddha Bowl was inspired by Heidi Swanson's Golden-Crusted Brussels Sprouts. The perfectly golden caramelized rounds of brussels sprouts coated in nutty Parmesan cheese spoke to me every time I paged through my copy of Super Natural Cooking, begging to be made.

Since brussels sprouts themselves do not constitute a buddha bowl, and that is our theme this week at IHCC, I looked around my pantry and gathered ingredients I felt would compliment them. I came out with a quinoa and brown rice mix, sweet potatoes, dried cranberries, glazed pecans, and some Dukkah. An autumnal mix of ingredients for sure.

I cooked the quinoa and brown rice mix adding a touch of butter, cut the sweet potato in cubes and roasted it, and prepared the brussels sprouts. Afterwards I layered it all in the bowl, with the dried cranberries, glazed pecans, and a sprinkling of Dukkah (a nut and spice blend) and called it dinner.

Overall, the bowl was delicious but I do have to say the Golden-Crusted Brussels Sprouts were my favorite part. I loved the caramelized flat sides, and my favorite parts were the sprouts that were covered in a crusty coating of Parmesan cheese. Delicious! 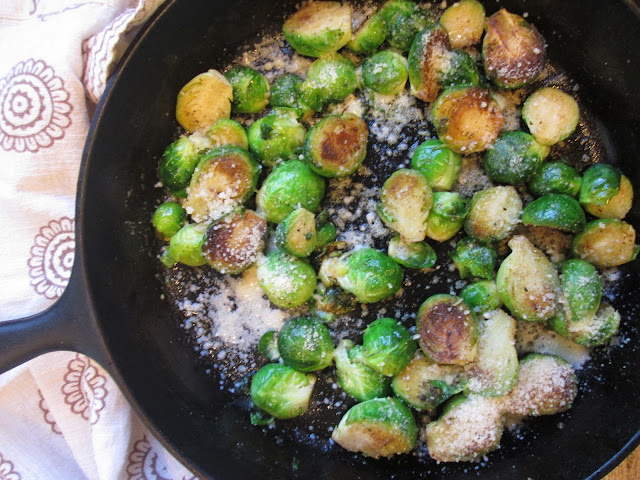 Trim the stem ends of the brussels sprouts and remove any raggedy outer leaves.  Cut in half from stem to top and gently rub each half with olive oil, keeping it intact. Heat the 1 tablespoon olive oil in your largest skillet over medium heat. Don't cook too quickly. Place the brussels sprouts in the pan, flat side down, sprinkle with a couple pinches of salt and pepper, cover, and cook for about 5 minutes; the bottoms of the sprouts should only show a hint of browning. Cut into or taste one of the sprouts to gauge whether they're tender throughout. If not, cover and cook for a few more minutes.

Once just tender, uncover, turn up the heat, and cook until the flat sides are deep brown and caramelized. Use a metal spatula to toss them once or twice to get some browning on the rounded side. Season with more salt, a few grins of pepper, and a dusting of grated cheese. While you might be able to get away with keeping a platter of these warm in the oven for a few minutes, they are exponentially tastier if popped in your mouth immediately. 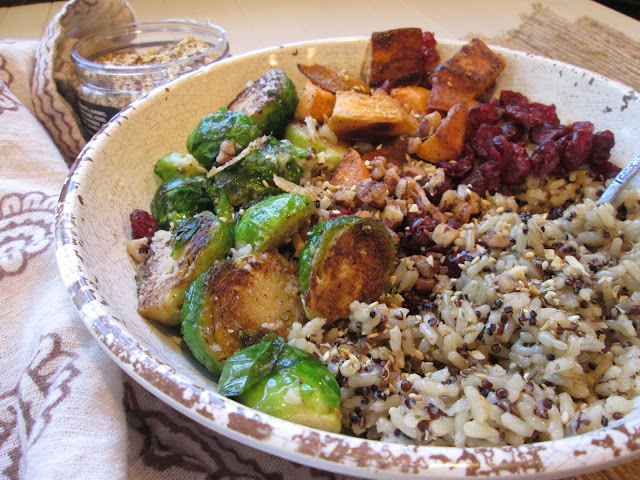