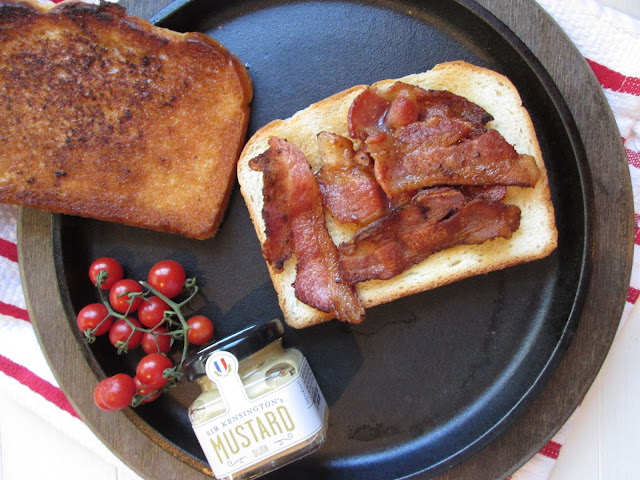 Isn't it funny how we evolve as cooks? We start off simple, then move on to try more complex dishes, new cuisines, and before you know it we are trying our hands at elaborate recipes with mile long ingredient lists. I've been there and I've done the dishes.  Nowadays, I feel like I've come full circle in a way. My thirst for elaborate dishes is fairly quenched and lean more towards simple food with quality ingredients.

That's what makes this post for Jamie Oliver's Bacon Sarnie so ironic. It's one of those full circle kind of moments. You see, for years I've laughed at Jamie's Bacon Sarnie recipes. He has a recipe for a bacon sarnie in nearly ALL of his cookbooks so it always caught my attention, but not always in a good way.  In my more elaborate cooking stages I scoffed about why anyone would want to eat ONLY a bacon sandwich. I can remember being totally perplexed why he wouldn't want to add egg and cheese, or tomato and lettuce, etc. I was so busy wanting to add more, more, more. I just didn't get it!

Wouldn't you know it...one day last week I was home alone indulging in my guilty pleasure, an episode of Nashville, and I started thinking about nothing other than a Bacon Sarnie. I had some fresh sourdough bread from the farmer's market and way too much bacon hanging around the house.  I let out a little chuckle and set about making one.

Surprisingly, there are lots of techniques for making a Bacon Sarnie. Toasted bread, untoasted bread, types of bacon, size of bacon, placement of bacon, things to dip the sarnie in, and on and on. One could literally try a bacon sarnie a different way for weeks. Either way, you could certainly have fun finding your favorite version. Of course, it tastes way better home alone on the couch, in your pajamas, watching you favorite guilty pleasure. Turns out Jamie was right all along. Happiness is a Bacon Sarnie. 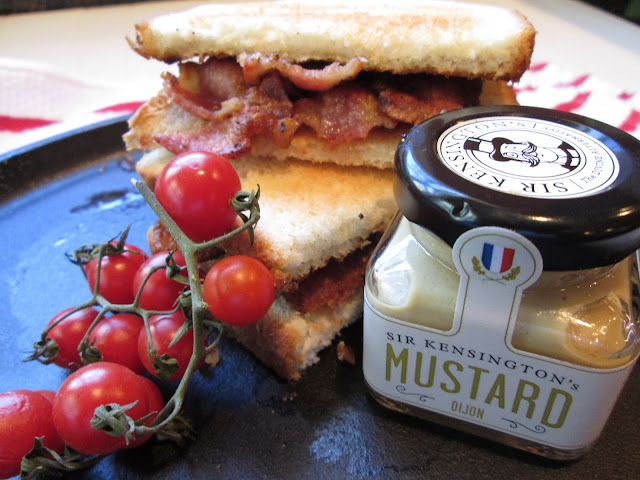 Jamie's version: Jamie says he prefers two 1/3-inch thick slices of a simple standard white crusty loaf. Then he likes to use back-bacon for his sarnie, cooking 3 pieces of back-bacon under the broiler on full whack. Jamie rubs a little olive oil on a baking sheet and the bacon, then blasts it in the oven under the broiler until golden and crispy, which encourages the fat end of the bacon to curl up, creating a little pond of delicious bacon juice in the middle. Jamie removes the baking sheet from the oven, pushes the bacon aside and lays the bread in the fat for a few seconds before assembling, letting the bacon slices sit on the bed of bread like spooning lovers. Then Jamie assembles his sandwich, cutting it diagonally from corner to corner and serves a bit of HP sauce for dipping.

Pete's version: Pete is Jamie's long-time friend and he makes his sarnie a little different. Pete's  version uses the same size bread but the 3 pieces of bacon are cooked in a frying pan, starting out from cold with a little drizzle of olive oil and gradually bringing the temperature up to medium-high so the fat renders out, placing something flat and heavy on top to ensure super-even crispy bacon. Then the bread is buttered and the bacon is laid side by side, like floorboards (north to south) on the bottom bread before topping with the second slice.  Once sandwiched, Pete likes to cut his sandwich into thirds (east to west) to get 3 perfect bites.  Pete likes to serve his bacon sarnie with an artist's palette of dipping sauces - (60% ketchup, 30% English mustard, and 10% green chili sauce, feathered together with a knife).

My version: I borrowed ideas from both Jamie and his friend, Pete. I used slices of sourdough bread and cooked 3 slices of bacon in a well-seasoned cast iron skillet over medium-low heat until crisp (I don't like fatty ends). I wanted my bread to be lightly toasted so it would hold up to a little bacon drippings so I toasted it in my toaster. Once toasted I piled the 3 slices of crisp bacon, and some of the drippings, onto the bottom slice of bread.  The top half of bread went straight into the drippings in the cast iron skillet to soak up some of that bacony goodness before being placed on top. I cut my sandwich straight down the middle and served it with Dijon mustard (my fave condiment) and some baby cherry tomatoes to make myself feel better about my indulgence. 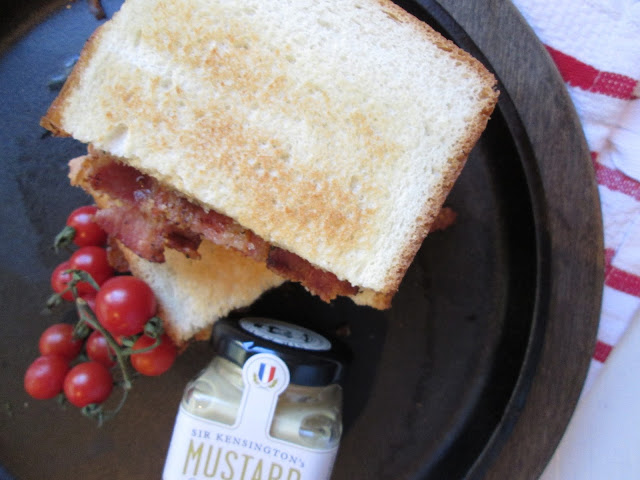