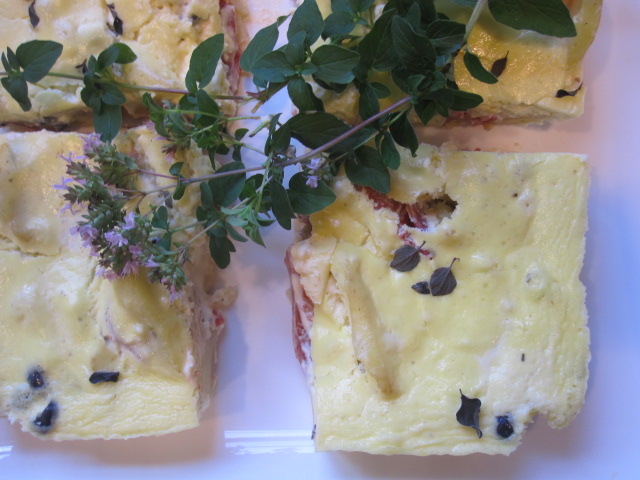 Smartphones.  We have a love/hate kinda relationship.  I believe there is a time to use your phone and lots of other times when you shouldn't. When I say lots of other times I really mean a good majority of the time.  For example, you're out to dinner with friends, family, etc.  Your phone does not belong on the table.  You're in the waiting room at the doctor/dentist office having a conversation with your husband.  Newsflash: I don't really want to hear that conversation.  You're in the checkout line and you're holding everyone up because you're messing around your phone.  My reaction might not be so nice.  Of course, I might be the only one who feels this way but I really do expect people to practice consideration when using their phones.

On the flip side, my iphone really comes in handy when I'm at the grocery store.  I use my phone to look up recipes nearly every time I'm at the store.  It's been a real lifesaver.  Recently, I bought my first cooking related iphone app, Ottolenghi, and it has also really come in handy.  When I needed something for this week's IHCC theme, Eggscellent, I found this tasty Potato and Red Pepper "Cheesecake" right on the app.

I've been wanting to try a savory cheesecake for a long time so I decided to give this a go.  It was really tasty, but it was almost verging on being a little too rich or decadent.  I think you definitely need to serve it with a little salad on the side.  Otherwise, we really liked it. 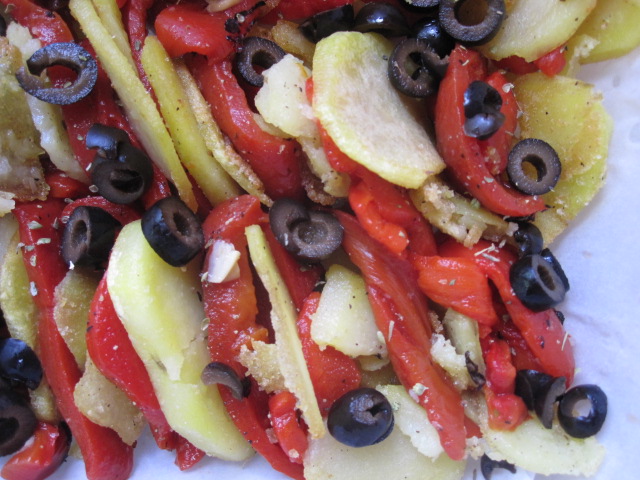 Preheat the oven to 425F.  Line a 9-inch baking dish (round, square, any shape will do) with parchment paper and brush with olive oil.

Mix the peppers together with the garlic, 2 tablespoons oil, 1/4 teaspoon salt, and a good grind of black pepper.  Spread out on a baking pan and roast for 25 minutes.  Remove and set aside to cool.  Reduce the oven temperature to 300F.

Bring a saucepan of salted water to a boil.  Add the potatoes, cook for 5 minutes, then drain.

Heat 2 tablespoons olive oil in a large skillet and add the potatoes.  You may need to fry them in two batches, so the pan does not get overcrowded.  Fry for 4-5 minutes, turning once to give both sides a light crispy surface.  Remove and set aside.

Place the feta, cream cheese, eggs, cream, and some black pepper in a mixing bowl and beat with a whisk until smooth and thick.

Cut each of the roasted pepper halves into two or three strips, about 1-1/2 inches wide, and place them and the potatoes in the baking pan --they should lean against each other, almost standing on their sides.  Put the olives into the gaps between the pieces and sprinkle with half the oregano.

Pour enough of the cream mixture into the pan to leave some of the vegetables exposed.  Bake for 30 minutes, or until the custard sets.  Five minutes before the end of cooking time scatter the remaining oregano on top.  Remove the cake from the oven and set aside to cool to room temperature.

Remove the cake from the pan and cut into four wedges.  Brush the top and side of each piece with the remaining olive oil and serve. 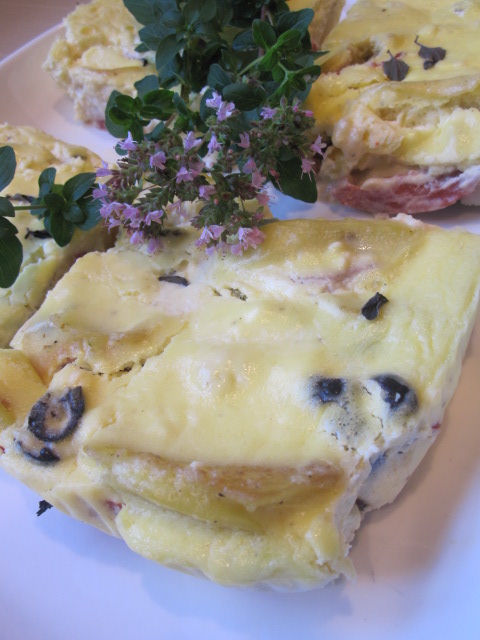