Risotto with Artichokes and Italian Sausage 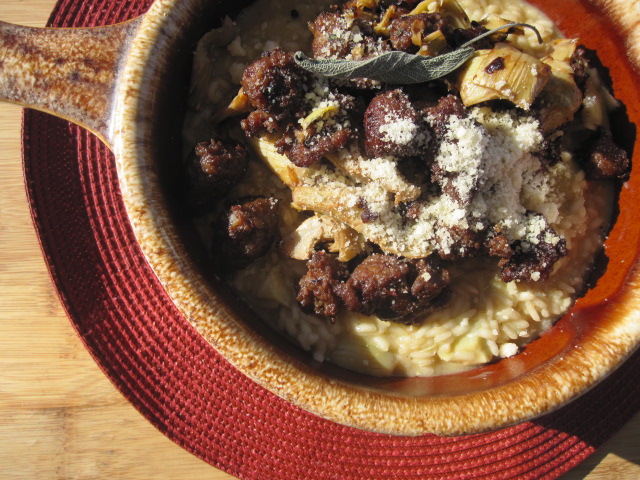 Are you one of those people who mixes their food about on the plate?  You know what I mean, right?  My husband, for example, will take a perfectly puffy, buttery, golden and flaky chicken pot pie and mix that wonderful crust right into the filling while I sit back and watch in horror.  He'll mix the hell out of the pot pie until it all looks beige on the plate.  Me, on the other hand, I like to spoon a bit of the perfectly golden and flaky crust right into the filing and take what I consider to be the perfect bite.  To me this is what good eating is all about, the contrast of taste and texture.
Now I could go on and on citing different examples, but I'll save you from all that.  Let's just say that food mixing drives me crazy.  You don't mix up an ice cream sundae.  You don't mix the toppings on top of your soup into the soup.   Or maybe you do.  I don't know.  I guess we all deserve to eat and enjoy our food the way we wish.  I just wish I didn't have to witness the food mixing.  It makes me cringe.
This recipe for risotto with artichokes and sausage is a perfect example on food mixing.  The author calls for you to cook the risotto along with the artichokes and sausage, all mixed in together.  When I first glanced at the name of this dish I envisioned a gorgeous serving of risotto with the artichokes and crispy bits of caramelized sausage sitting on top.  I just couldn't bring myself to lose the crispy caramelized bits on the sausage so I changed the recipe to suit my tastes.  I sauteed my sausage and artichokes until golden and then set them aside so that I could top the risotto with them later.
Either way, I have a feeling that you really can't go wrong on this recipe.  It is super fantastic!  Definitely worth repeating.  The only thing that could make this risotto any better would be the addition of a little mascarpone into the risotto at the end. 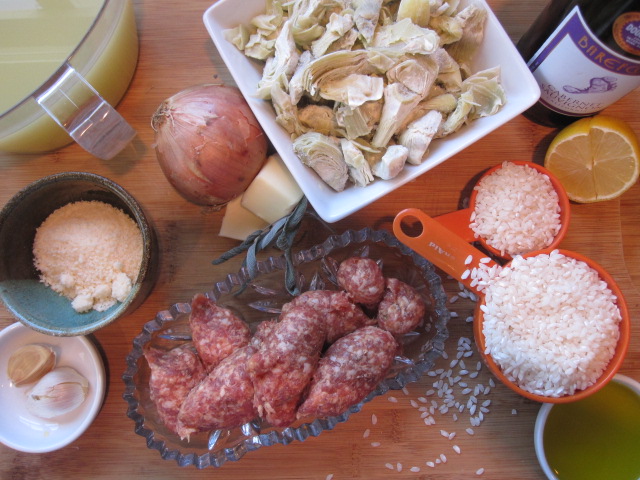 Risotto with Artichokes & Italian Sausage
Adapted from Falling Cloudberries by Tessa Kiros
Serves 4
Tessa says, " It is simple to throw together a broth - just put some water on to boil with a carrot and onion, celery, and peppercorns.  Add a bit more water than the recipe calls for and boil it for at least half an hour.  A broth adds depth to a risotto; however, you can also use water."
juice of half a lemon
2 artichokes
4 - 6 cups hot veggie or chicken broth
3 tablespoons olive oil
2 tablespoons butter, plus 1 teaspoon
1 small onion, finely chopped
2 by 3 oz. Italian sausages, skin removed and meat crumbled
1/2 cup red wine (optional)
2 garlic cloves, lightly crushed
a couple of thyme or tarragon sprigs or sage
1-1/4 cups arborio rice
1/4 cup grated Parmesan cheese, plus extra to serve
Fill a bowl with cold water and add the lemon juice.  Trim the artichokes of their tough outer leaves.  Chop off about a third of the top spear.  Cut off the stem, leaving about 1 inch.  Trim away the dark outer stem.  Cut the artichokes in half vertically and scrape out the chokes.  Slice each one into 8 or 9 thin slices and put them in the lemon water.  Alternatively, buy a can of artichokes or one 10 oz. bag of frozen artichokes.  If frozen, allow them to come to room temperature.  If you are buying canned or frozen artichokes there is no need to clean them or add them to the lemon water.
Put the veggie broth or water in a saucepan, cover, and bring to a simmer.  Keep at the simmering point while you make the risotto.

Heat the olive oil with the teaspoon of butter in a wide, heavy-bottomed saucepan or a skillet with high sides.  Saute the onion until golden and then add the crumbled sausage.  Continue cooking until golden, stirring often so it doesn't stick.  Once the sausage is golden deglaze the pan with the 1/2 cup red wine, if using.  Allow the wine to evaporate.  This will take about 1 minute.  Add the garlic, drained artichokes, and the sprigs of thyme or tarragon.  Saute until the artichokes are slightly softened and lightly golden.  (The recipe calls for leaving the sausage and artichokes in the pan while you cook the risotto.  I chose to remove the sausage and artichokes and set it aside so I could top the risotto with it).

Add the rice to the pan, stir well, and season with salt and pepper.  Add about 1 cup of the hot broth or water; decrease the heat to a simmer, and cook, stirring often, until almost all the liquid has evaporated.  Add more liquid and continue cooking, stirring regularly and adding more liquid as it is absorbed, for about 20 minutes, or until the rice is tender.  The risotto should still have some liquid and the rice grains should be firm yet soft and creamy.  Stir in the butter and cheese and serve immediately with extra Parmesan.  (If you set the sausage and artichokes aside as I did, gently reheat them in a pan.  Place the risotto in a large serving dish and top the risotto with the crumbled sausage and artichokes).
So tell me.  Do you like to mix your food?
Posted by Kim at 2:00 PM