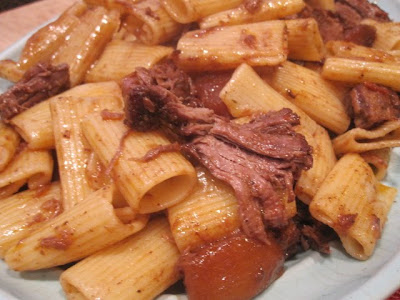 This recipe is a huge labor of love. However, fifteen hours later you will have the most deliciously tender, succulent, melt-in-your mouth beef roast with a complex and flavorful sauce served over rigatoni. It will make your family swoon. It will make you want to kiss Michael Symon (assuming you never thought of kissing him before). 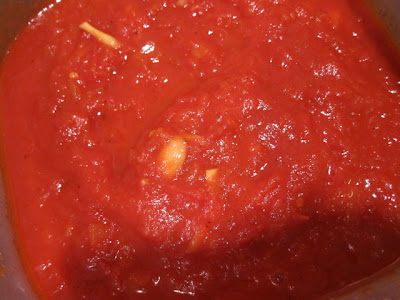 When my family sees Symon's cookbook laying on the kitchen counter they know they're in for something good. They also know when they see his book it means that I'll be in the kitchen for awhile and his Yia Yia's Sunday Sauce is no exception. Yia Yia was Symon's maternal grandmother and this is her sauce. A rich homemade tomato sauce that simmers for 8 hours, Symon uses this sauce as a base in many recipes throughout his book, including his Italian Braised Beef with Root Vegetables.
Yia Yia's Sunday Sauce
Adapted from Michael Symon's Live To Cook
Makes 2 quarts, freezes well
1/4 cup olive oil
1 large Spanish onion, finely diced
6 garlic cloves, sliced
1 tablespoon kosher salt, or more to taste
2 28-ounce cans San Marzano tomatoes, with their juice
1 cup dry white wine
2 pounds meaty beef bones (or 2 cups beef broth)
1 bay leaf
1 tablespoon fresh oregano leaves
1/4 teaspoon freshly ground black pepper
1 tablespoon crushed red pepper flakes (optional)

Heat the oil in a 4-quart saucepan or large Dutch oven over medium heat. Add the onion and cook until transparent, 2 minutes. Add the garlic and salt and cook until everything is soft but not browned, about 3 minutes.

Squeeze the tomatoes one by one into the pan, pulverizing them by hand, and pour in their juice, too. Add the wine, beef bones (or broth), bay leaf, oregano, black pepper, and red pepper flakes, if using. Bring the sauce to a simmer, then reduce the heat to its lowest possible setting, and continue to cook for 8 hours. The sauce should reduce by about one third.

Taste for seasoning and add more salt if necessary. Remove the bones (if using) and bay leaf. If not using right away, let the sauce cool, then cover, and refrigerate for up to 1 week or freeze for up to 2 months. 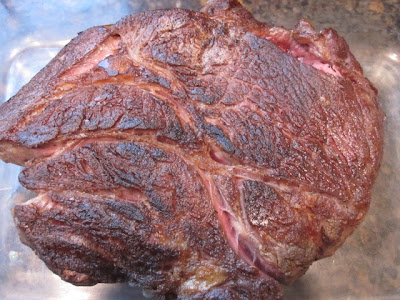 Let's talk about a couple key points in making a roast. The first, and most important step, is picking a great roast. If you don't buy a great roast then it won't matter how long you cook it or what you do with it. Symon says to use a rump roast, but after years of experimenting I like to use a shoulder roast, preferably black angus. The shoulder cut is a flat cut, which fits well into most pans or slow cookers, and has good marbling throughout. Marbling is very important! I always check to make sure the roast is fresh, meaning that the roast itself is bright red and the marbling is very white.

The second step in a great pot roast is to SEAR the roast, on all sides. Searing is one of the keys to great flavor.

Another great tip that I learned from Symon is to make sure that when braising, a third of the meat is above the liquid. The meat should not be submerged, so pot size is important. I found that a 9 x 13 dish was the perfect size for this roast. 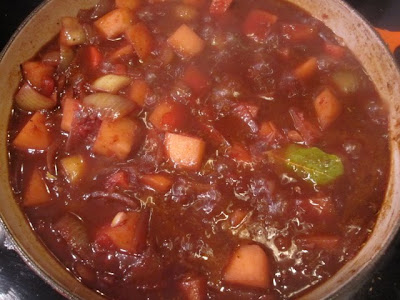 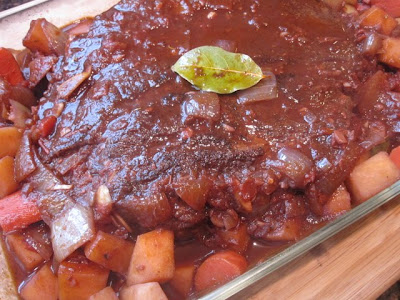 Season the meat liberally with salt and pepper, as much as a day in advance. (Cover and refrigerate it if doing so and take the meat out of the fridge 30 minutes before cooking.) Heat the oil in a large Dutch oven over high heat. When the oil is on the verge of smoking, sear the meat, about 2 minutes on each side. Move the meat to the side (or remove it from the pot altogether if necessary), and add the carrot, onion, and celery root. Brown the vegetables, about 3 minutes, then add the garlic and cook for a minute or two longer.

Add the wine to deglaze the pot, scraping up the browned bits on the bottom. Add the tomato sauce, 1 cup water, and the bay leaves (and the pot roast if you removed it). Bring the liquid to a simmer and taste for seasoning. Add more salt if necessary. Cover the pot and place it in the oven for 3 hours, basting the meat occasionally during this time.

Discard the bay leaves before serving. The meat can be removed to a cutting board and sliced if you're serving individual plates, or the meat can be pulled apart with a couple of forks right in the pot at the table and served with plenty of the sauce and vegetables.

*Michael's family served their roast over rigatoni, so I did the same.

Notes/Results: A fabulous and soul-satisfying dish, one to be proud of for sure. The sauce on this pot roast is so sensational, a winning component of the recipe. This roast would be great served on it's own, with polenta, or with mashed potatoes. I served this 4 pound roast over a pound of rigatoni and it was gone in record time. Many hands fought over the leftovers the next day. This recipe will be made again in the coming months.

This recipe is being submitted to Ashlee over at Veggie By Season for the bi-monthly Symon Sundays event.

It is also being submitted to Food 'n Flix, where this month's movie is The Ramen Girl.

And also to the Hearth 'n Soul Blog hop, co-hosted by my friend Heather of girlichef. 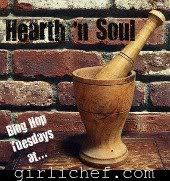