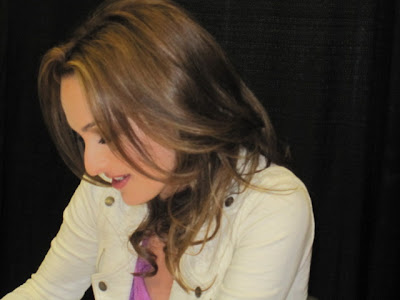 On Saturday afternoon I went to the second annual food show in Lexington. Giada De Laurentiis was the celebrity chef this year and I was so pleased to have the chance to meet her. Giada was very gracious to her fans at the book signing. She took the time to talk, pose for pictures, and give hugs. By the time I arrived to have my book signed, security was ushering her along. I managed to snap this picture while she was signing my copy of Giada's Family Dinners. I had a million questions, or things I wanted to say to her, but I think I got awestruck. She is absolutely radiant in person! I managed to say something silly like "It's so nice to meet you." (Brilliant, right?) 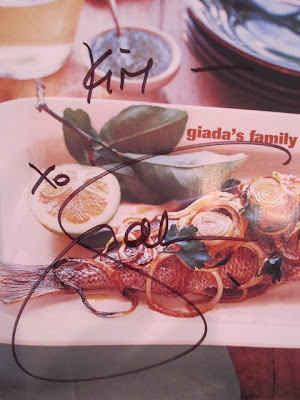 Later in the day, Giada did a cooking demonstration where she pulled members of the audience up on stage to help her cook. She took a lot of questions during the cooking demo and was very open with the audience. She talked about some of her most embarrassing moments, discussed the filming for her show, and also her family. You could really tell that she enjoys talking to her fans. 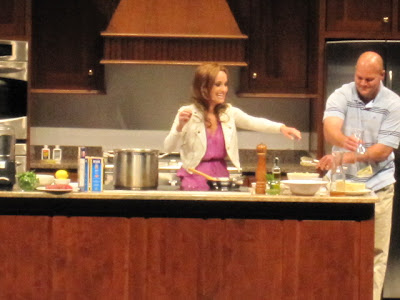 The highlight of the show, at least for me, was when one gentleman asked her for a knife so he could cut his spaghetti. Giada replied "You can't cut pasta. You suck it!" The audience roared with laughter.

Another member of the audience asked the ultimate food question. "What is your favorite thing to eat?"

I had to chuckle because Chocolate Cravings is our theme this week at I Heart Cooking Clubs, where we are celebrating Giada's recipes for the next 6 months. How fitting! 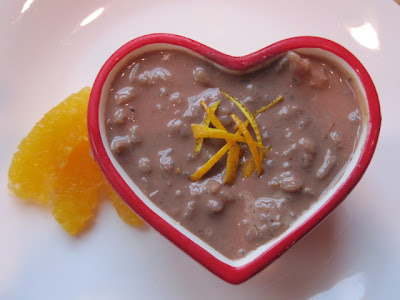 Never having made or ate a rice pudding before, I decided on Giada's Chocolate Rice Pudding. During her cooking demo, Giada talked about how she prefers semisweet chocolate to milk chocolate. She told us that many times she tends to write her recipes to include semisweet chocolate and that we should use whichever chocolate we prefer. I prefer milk chocolate, which is what I used in this recipe. The rice pudding is accented with orange zest and orange liqueur, giving the pudding that fantastic flavor of orange and chocolate. I garnished mine with more orange zest and orange segments on the side. Perfect colors for the Halloween weekend coming up!
Chocolate Rice Pudding
Adapted from Giada at Home
Serves 6-8
5 cups whole milk
2/3 cup Arborio rice
3/4 cup sugar
1-1/2 teaspoons grated orange zest (from 1 medium orange)
1 vanilla bean, split lengthwise
1 tablespoon unsweetened cocoa powder
1-1/2 tablespoons orange liqueur
1 cup semisweet chocolate chips (I used 3/4 cup milk chocolate, 1/4 cup semisweet)

In a medium heavy-bottomed saucepan, combine the milk, rice, sugar, and orange zest. Scrape in the seeds from the vanilla bean and add the bean to the saucepan. Bring the milk to a boil, stirring occasionally. Reduce the heat to medium-low and simmer, stirring frequently, until the rice is tender and the mixture thickens, 35-40 minutes.

Remove the pan from the heat and discard the vanilla bean. Stir the cocoa powder and orange liqueur into the mixture. Add the chocolate chips and stir until melted. Allow the mixture to cool for 10 minutes, stirring occasionally.

Spoon the rice pudding into serving bowls. Cover and refrigerate for at least 2-1/2 to 3 hours or up to 1 day before serving.

Now cooking the recipes of Giada De Laurentiis!
Posted by Kim at 9:25 AM