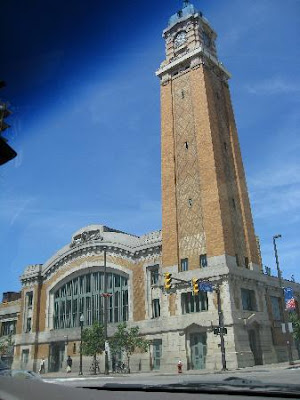 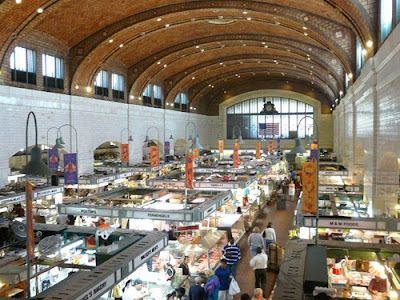 I lived in the Cleveland area for the first 26 years of my life but I had never been to the West Side Market before. My husband said that my eyes were glazed over and my head was darting around everywhere;-) He spent the next day or so teasing me about how he had to take both of our two children under his wing because he knew that I wasn't paying any attention to them! I couldn't help it. I'm easily distracted and here I was smack in the middle of foodie paradise! 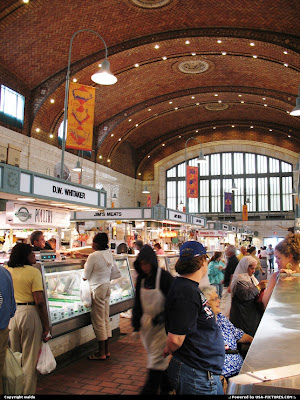 My first stop was the Pierogi Palace! When you grow up in the Cleveland area you are born and raised on pierogi. I love them so much but am unable to buy them at home in Kentucky. 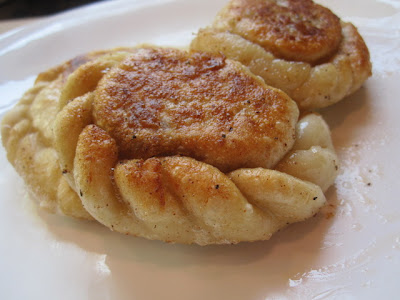 I brought 3 dozen and packed them in a cooler to bring back home! If you've never tried a pierogi, you simply have to! A pierogi is essentially a dumpling made from pasta dough. Kind of like a ravioli, but thicker and bigger. There are numerous fillings for pierogi. The typical filling is potato or potato and cheese, but you can stuff anything in a pierogi. Pierogi can be boiled, pan-fried, or deep fried. You can even put them in casseroles! I was so delighted to see so many varieties at the Pierogi Palace. I bought one dozen potato and cheese, 6 potato and jalapeno, 6 taco, 6 corned beef and 6 Cajun pierogi. All of them were delicious!! 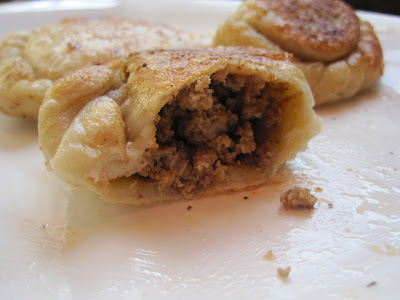 Pictured above is the Taco Pierogi. It contained cheese and ground beef which had been seasoned with taco seasoning. This one was my husband's favorite. He's requested a return trip for more:-) 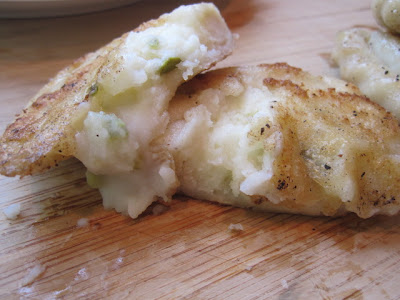 Anything with jalapeno is always a hit with both me and my husband and these Potato and Jalapeno Pierogi(pictured above) were no exception! The jalapeno in these was pretty hot, but they were a spicy delight! Definitely one we would buy again. 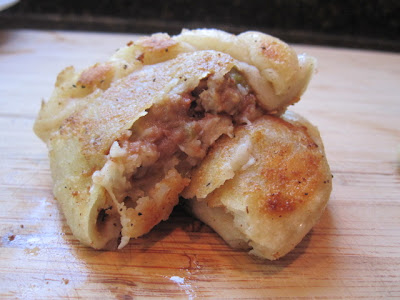 My personal favorite was this Cajun pierogi. Wanna know why? It was stuffed with mashed red beans and sausage! I think by now you all know that I love beans and this filling was smooth and creamy with little bits of spicy sausage and green pepper. I absolutely loved these and will buy about 2 dozen when I go back ;-) 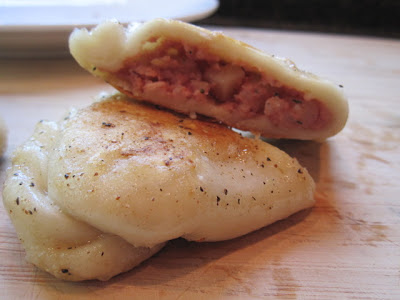 This last one is the Corned Beef Hash Pierogi. Delicious corned beef with little chunks of potatoes. This one is terrific on it's own, but would be really great with some sauteed cabbage. 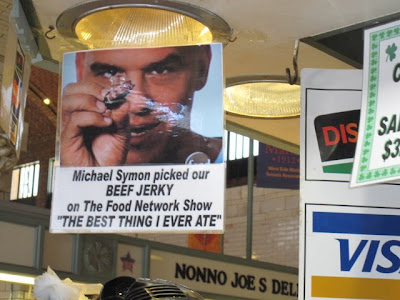 After leaving the Pierogi Palace we went in search of the Beef Jerky that Michael Symon recommend on Food Network's show "The Best Thing I Ever Ate". 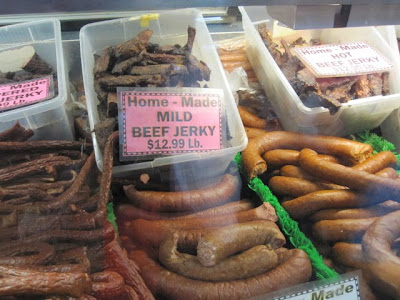 We bought one pound of the Hot Beef Jerky, which really was the best we'd ever had. We took the jerky home to my Dad's house and everyone vowed that it really was the bomb! Definitely some addictive and satisfying stuff. I'd love to learn how to make my own. 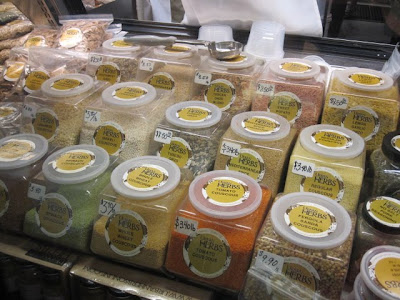 Up next was a stop to Urban Herbs which sold all sorts of fun things: Beans, Lentils, Peas, Chiles, Fruits, Marinades, Veggies, Grains, Herbs, Spices, Mushrooms, Nuts, Seeds, Vinegars, Stocks, Oils, Couscous, Orzo, Rices, Salts and Sugars. This was the place where my mind became totally overwhelmed. Not only did they sell all these great things, but so many different varieties. There were so many things I wanted and I had no idea where to start. 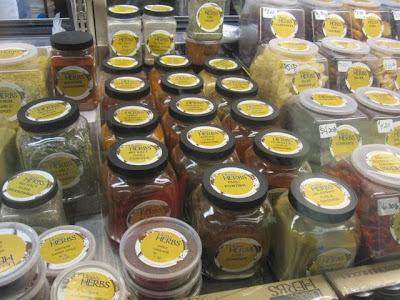 I decided to go for the things I couldn't get at home. I've heard that cardamom pods are expensive and since I can't find them at home I bought 2 oz. for $1.99. I'd always heard of ghost chiles and had never come across them before, so I bought a container of those. They came with their very own set of rubber gloves......hmmmmm. I also bought some farro, a type of wheat or grain that has become popular in Italian cooking. I love couscous and was tempted to buy every kind available, but settled for a pound of red Tomato couscous and a pound of Spinach Couscous. The colors of each are stunning and I can't wait to use them. I could've easily spent $200 or more in this section alone, but we were loaded down with bags so I had to walk away. 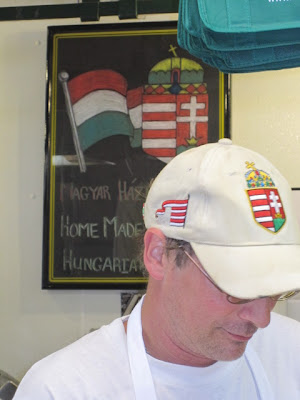 This fella worked at the Hungarian meat stand where they made their own homemade sausages. He was a super helpful and nice guy (too bad he moved when I tried to take his picture). 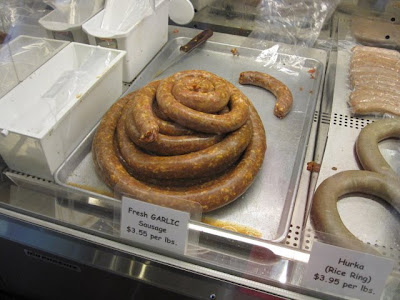 We bought 2 pounds of his Garlic Sausage on our way out. I wish we could've carried more. That garlic sausage was some good stuff. We almost went back up to the market on our way home to Kentucky in order to buy more! 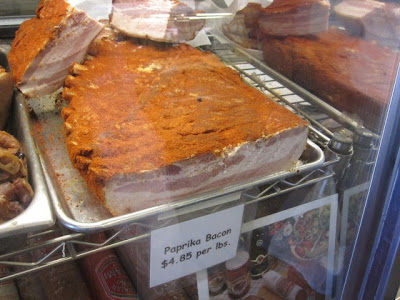 One thing I regret not buying was his Paprika Bacon. Doesn't it look delicious? 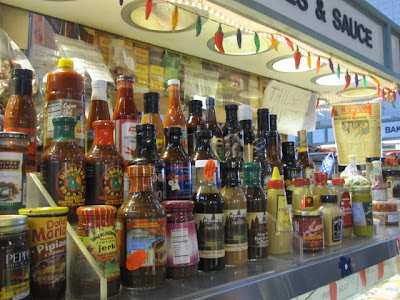 We saw so many wonderful things while at the market. Vendors selling only sauces and marinades as pictured above. 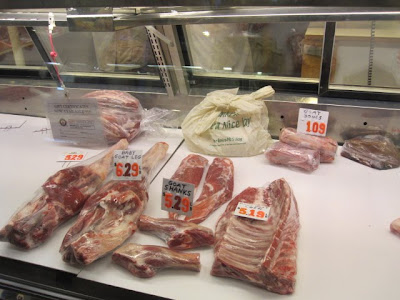 Every kind of meat you can imagine, both whole and butchered. I happened to see a whole goat in a glass case. When I went back to get a picture it was gone and the above picture is what was left. 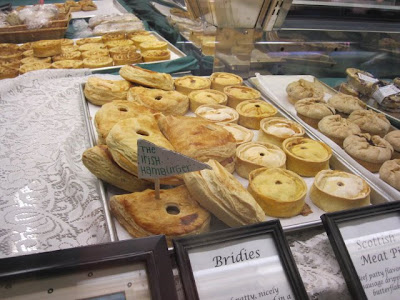 What I loved about the West Side Market is that almost every culture was represented. This vendor was selling English pasties, Scottish Meat Pies, Birdies and the Irish Hamburger. 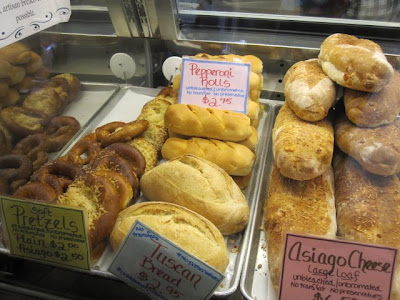 Breads and baked goods were abundant in the West Side Market. So many wonderful fresh breads from all cultures. My daughter and I bought one of the Asiago Soft Pretzels, pictured above. 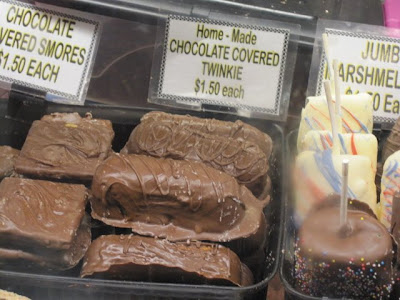 And, how could I resist not taking a picture of a CHOCOLATE COVERED TWINKIE? I think I've seen it all! The bad part is that I really wanted one. I didn't do it this time around BUT I'm being honest when I say that I know I would eventually cave in and eat one. 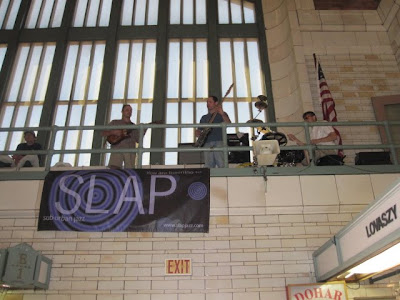 There was even a band playing high up in the balcony area.

Going to the West Side Market was a full on senses overload experience for me. So many wonderful things to see, smell, touch, taste! I found that my adrenaline was running and my mind was reeling. I felt like I was on an adventure where I was able to immerse myself in my surroundings and go on a trip with my senses. Going to a market like this is one of my favorite things to do and always stirs up the passion I have for food. I could have easily spent the entire day at the West Side Market.

I'm so happy and appreciative to have you all who are so equally passionate about food and cooking! It is so nice to be surrounded by others who have a similar passion.