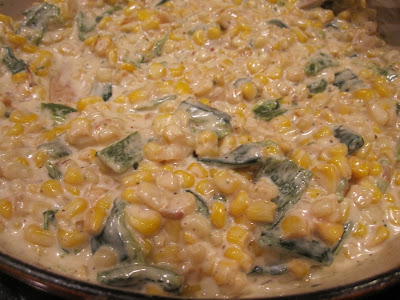 It was a busy weekend here at Stirring the Pot. One thing after another, you all know how that goes. We spent the bulk of the weekend getting two cars fixed and neither one ended up being right. My husband's work vehicle broke down Thursday night, spent Friday in the shop, ran fine for an hour or so and then broke down again on Saturday. We're crossing our fingers that they can get it right this time around. My car wasn't broken, but we had an appointment to have a leather seat replaced. The shop replaced the seat alright....in a different color! Sometimes I really wonder what goes on in people's heads. It seems like it is nearly impossible to get what you pay for these days and that is a shame.

Frustrated and famished, I cooked up two different types of taco fillings. The first was Sauteed Potatoes with Chorizo and the second was Creamy Poblano Pepper Strips (Rajas). Both recipes were featured on the new Food Network Show, Mexican Made Easy. I have to admit that I'm still not sure what I think of the show itself, but I have loved all three recipes I've tried so far. 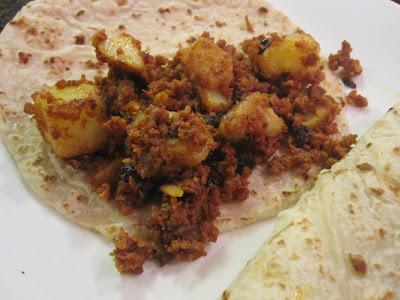 The Sauteed Potatoes and Chorizo were super easy and delicious. You can find Marcela's recipe posted HERE on Food Network. Mexican chorizo is sauteed with onion and boiled red-skinned potatoes to make a delicious, easy and unique taco filling. The recipe makes a ton of food and is great the next morning as a filling in an omelet or folded into scrambled eggs. We really liked it!

The next recipe,and our favorite, is the Creamy Poblano Pepper Strips, also known as Rajas, found HERE on the Food Network website. 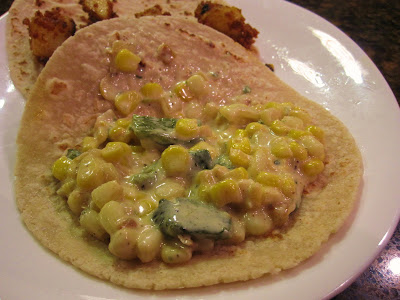 The recipe for Rajas begins by blackening six poblano peppers, steaming them, and removing both the skins and seeds. The peppers are cut into strips and added to a mixture of sauteed onion and corn. This dish is finished off by the addition of heavy cream, creme fraiche, and monterey jack cheese. This recipe is SO good! It is tasty on it's own, but is delicious in a corn tortilla. I made a few changes to the recipe which I will note below.

Notes/Results: Creamy, unique and delicious, the Rajas were our favorite. I made a few changes to the pepper and corn filling because I have a major aversion to creme fraiche and sour cream. I replaced the creme fraiche with cream cheese and found that my mixture was a little too dry, requiring more heavy cream (oh darn!). The poblano peppers aren't hot at all, but did add a nice mellow pepper flavor to the filling. Even my picky daughter liked the poblano pepper and corn filling. Tucked inside of some delicious corn tortillas, both fillings were delicious!

Warning: While both recipes are delicious, they do make a ton of food! Luckily we loved both recipes and have been happy to have them as leftovers throughout the weekend. Both recipes would be great for a larger family or a gathering. In fact, they were featured as part of a Mexican Cookout on Marcela's show.

P.S. I was so hungry I snapped the pictures as quick as I could and got busy eating! Sometimes it's so hard to stop and take the time to worry about getting good pics!
Posted by Kim at 1:44 PM