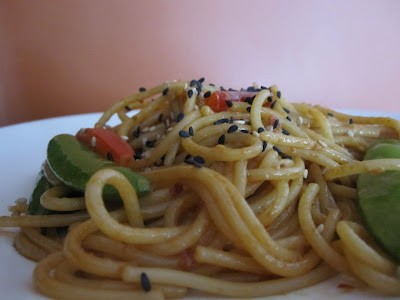 The theme for I Heart Cooking Clubs is Midnight Sneaks. Since I am a night owl and a professional midnight snacker, I am very qualified in this department. At my house, a midnight sneak or snack could literally be anything. Sometimes it's a quick piece of cheese, a couple pretzels or crackers, and even sometimes a full-blown meal. The midnight sneak is especially hearty if I have just arrived home from work at ten or eleven at night. I chose Nigella's Sesame Peanut Noodles because I knew they would be delicious. I loved the idea of making a large batch of noodles that could be eaten hot or cold. Since pasta is my favorite, I knew I would get a midnight craving for these, and I was right. These sesame peanut noodles were really tasty, and got better the longer they sat in the refrigerator. A delicious midnight sneak! 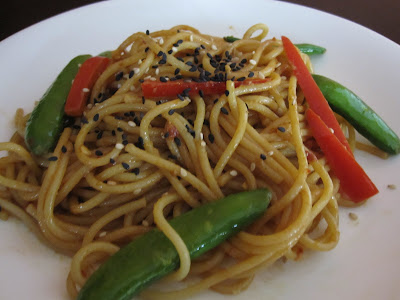 Sesame Peanut Noodles - Nigella Express by Nigella Lawson
For the dressing:
1 tablespoon sesame oil
1 tablespoon garlic-infused oil
1 tablespoon soy sauce
2 tablespoons sweet chile sauce (I used garlic-chili paste, which is some pretty spicy stuff)
1/3 cup smooth peanut butter (I used a scant 1/3 cup)
2 tablespoons lime juice (I did not include this because I didn't have any on hand)

Whisk together all of the dressing ingredients in a bowl or small pitcher. Put the noodles, bean sprouts, snow peas, sliced red pepper, and sliced scallions into a bowl. Pour over the dressing and mix thoroughly to coat everything well. Sprinkle with the sesame seeds and cilantro and pack up as needed.

Notes/Results: These noodles were really tasty and I will make them again. Next time, I will be sure to pick up the scallions and fresh cilantro as I love both of those and think they would've made the final result even more delicious. These noodles were better the next day and I imagine will be better even today. I only used one pound of pasta and feel like 1-1/4 pounds of pasta would be too much pasta for the amount of sauce. In fact, the noodles could probably have more sauce. I topped mine off with a couple shakes of soy sauce when serving. I also had both regular sesame seeds and black sesame seeds which I garnished with. I wasn't sure what sweet chile sauce was, so I used my garlic-chili paste which is really hot, especially when you add two tablespoons of it. It turned out okay, because both hubby and myself love spicy foods. You could really add all kinds of vegetables. I also added some shredded chicken, which was delicious. A great midnight sneak!!

It's not to late to create your own midnight sneak! Head on over to I Heart Cooking Clubs to see what others were sneaking in the middle of the night !

Also, Deb of Kahakai Kitchen is having an awesome giveaway! Click here to check out her review of John Besh's new cookbook, My New Orleans. Deb has made seven wonderful recipes and given the cookbook rave reviews. Don't forget to enter the giveaway for a chance to win a wonderful cookbook!
Posted by Kim at 9:29 AM