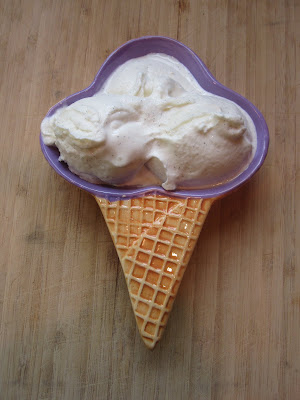 This morning I knew of two ways to make ice cream: basic custard-style(with eggs) and Philadephia-style(without eggs). I was all set to make Mark Bittman's Basic Philadelphia Vanilla Ice Cream. Out of sheer boredom, I typed the words "Mark Bittman's Vanilla Ice Cream" into my search bar, thinking maybe I would find others who had made the recipe. Instead, I found another Mark Bittman recipe for a cornstarch-based vanilla ice cream, courtesy of the New York Times. Having already made both custard-based and Philadelphia-style ice creams before, I was intrigued with Bittman's cornstarch-based ice cream.

A short article in the New York Times can be found online, which explains the advantages of making ice cream both with cornstarch and with eggs. Apparently both cornstarch and eggs help to impede crystals from forming in the ice cream, thereby leaving the ice cream with a smooth and creamy consistency. Bittman says there are two different advantages in making the cornstarch-based ice cream. The first, and most obvious reason, is that the cornstarch is much lower in fat and calories than an egg-based custard. The second reason, Bittman says, is that the cornstarch helps to bring out the flavor of the ice cream, rather than mask the flavors as eggs can do. Taking into consideration the obvious advantages of making a cornstarch-based ice cream, along with the fact that my son is allergic to eggs, I knew immediately I was going to try this recipe. The article and recipe can be found HERE. 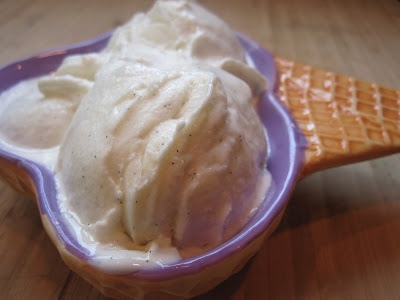 This is a very basic and easy recipe. It is also adaptable because you can chose to use cream, half & half, whole milk, 2% milk, or even skim milk. I had some half & half that needed using up, so I decided to use that. If you choose to use 2% or skim milk this would actually be a pretty healthy ice cream. Two cups of half & half were mixed with 1/2 cup sugar, a pinch of salt, and one vanilla bean and heated on the stovetop until the half & half began to steam. When the half & half begins to steam, you add in a slurry of 3 tablespoons cornstarch mixed with 1/2 cup half and half. The mixture, with the cornstarch added, cooks for about 5 minutes, or until it reaches a light boil. The custard needs to cool completely before being added to your ice cream maker. This process takes at least one full hour, sometimes longer.

Notes/Results: This is a really easy and quick recipe for ice cream. The mixture comes together very quickly and yields a thick custard/pudding. Bittman's instructions fail to state that you will need to cover the custard with plastic wrap while it is cooling. If you don't cover it, then there will be a "skin" that develops. I don't really like skin in my ice cream, so I skimmed it off the top. No major problems, no worries. The mixture took about 1-1/2 hours to cool down completely and I impatiently put it into the ice cream maker. The end result was in fact very smooth and creamy, much like a soft serve ice cream. The flavor, however, was over the top vanilla. I'm thinking maybe the cornstarch base really does let the flavor of the ice cream shine. You could definitely get away with using one half a vanilla bean instead of the whole vanilla bean. I liked the ice cream, but it was a little different and had somewhat of a different flavor. I'm very glad to have learned about the cornstarch-based method and I'm happy that I tried it, but I think I'll stick with the other two methods.

This is my submission to this week's Potluck theme over at I Heart Cooking Clubs.
Posted by Kim at 2:15 PM