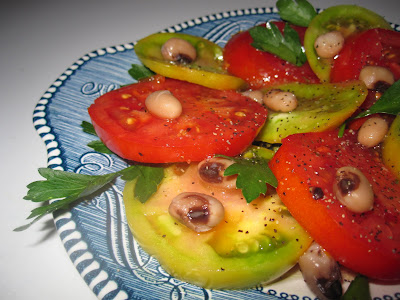 I was so happy to finally make this salad! It's taken quite some time to get the two main ingredients for this recipe. I had heirloom tomatoes and then couldn't find black-eyed peas anywhere. I went to three grocery stores in Kentucky for black-eyed peas and no one had them. I happened to go to a co-op last week and found a can. By that time, the tomatoes had been put to another use and I had to look for more heirloom tomatoes. Another debacle. No one had any heirlooms left by the time I found the black-eyed peas. My Mom, however, has grown some beautiful tomatoes this year and they looked beautiful to me.

I made this tomato salad last night at my Mom's before going to work. It was very quick, maybe 5-10 minutes. We enjoyed it and would eat it again, but agreed that we missed the cheese like a Caprese salad would offer. This salad was stunning in presentation and would be healthier than a Caprese, a good option for anyone watching what they eat.

In a small bowl whisk together vinegar and oil; drizzle over salad and season with salt and pepper. Garnish with watercress or parsley, in my case.

This is also my contribution to Tyler Florence Fridays, a very popular site devoted to Tyler's recipe. Head on over there to check out what everyone else made this week! I am also submitting this to Deb over at Kahakai Kitchen for her Souper Sundays club. Every Sunday Deb posts a beautiful array of soups, salads and sandwiches. 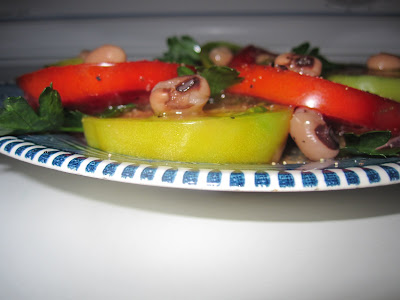