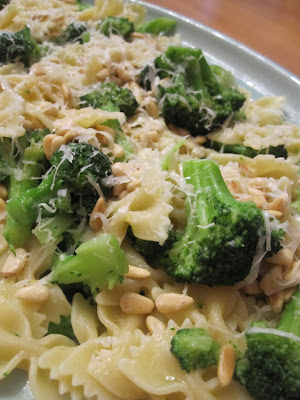 I haven't been cooking a lot of new recipes this lately. Instead, I have been repeating some new favorites. A few weeks ago I made Copycat Broccoli Cheese Soup from Panera and it was so good that I have made it two more times since then. It has become one of my new favorite recipes. I have also made peanut butter and chocolate chip muffins twice, which is a recipe I got from Donna at My Tasty Treasures. Those muffins are super delicious and everyone loves them. Another favorite this month was Ina Garten's herb-marinated loin of pork, which I just made again last night. We loved Ina's version of pork tenderloin so much that it is our new "go to" recipe for pork tenderloin. I used Ina's biscuit recipe to top my ham pot pie and we loved the biscuits so much that I made them again for breakfast a couple days later.

On a roll with Ina's recipes, I decided to make her Broccoli and Bowties (recipe found here). It begins with four heads of broccoli which are cooked in boiling, salted water for 3 minutes and then added to 1/2 pound of cooked bowtie pasta. A sauce is made from butter, olive oil, minced garlic, and lemon zest and poured over the pasta. The pasta is topped with toasted pine nuts and Parmigiano-Regiano.

I think I had rather high expectations for this dish and although it was good, it wasn't great. I enjoyed the broccoli and pasta and loved the hint of the garlic and lemon, but I would rate this more along the lines of a solid three stars, possibly four stars. I guess they can't all be five-stars!

For dessert I broke out my new springform pan and made Nigella's cheesecake from Nigella Express. Nigella's cheesecake is a no bake recipe with a graham cracker crust. In her cookbook, she tops her cheesecake with cherries. We didn't have any cherries so I topped ours with chocolate sauce. The recipe went together in about 10 minutes and was super easy. After chilling in the refrigerator for a couple of hours it was ready to eat.

Nigella's cheesecake recipe can be found here, online at Food Network. The cheesecake filling is a combination of cream cheese, sugar, and vanilla folded into whipped cream. I tasted the cheesecake filling before adding it to the pan and found that it needed a little more sugar. I added about 1/4 cup confectioner's sugar to the filling. Nigella's instructions tell you to fold the whipped cream into the thick cream cheese mixture, which was almost next to impossible. Instead, I mixed the two in my Kitchenaid mixer and I think it worked out fine.

The cheesecake was light and creamy and we liked it, but it wasn't anything spectacular. The upside of this recipe is that it can be thrown together with very few ingredients and also very little time. Great if you need a dessert in a hurry and don't have time to run to the store. 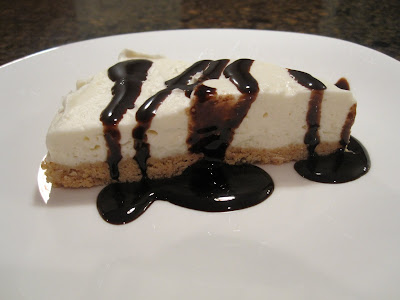 I am submitting this cheesecake to I Heart Cooking Clubs. This week's theme is potluck, which means anything goes. Head on over to the to see what everyone else is cooking up this week.